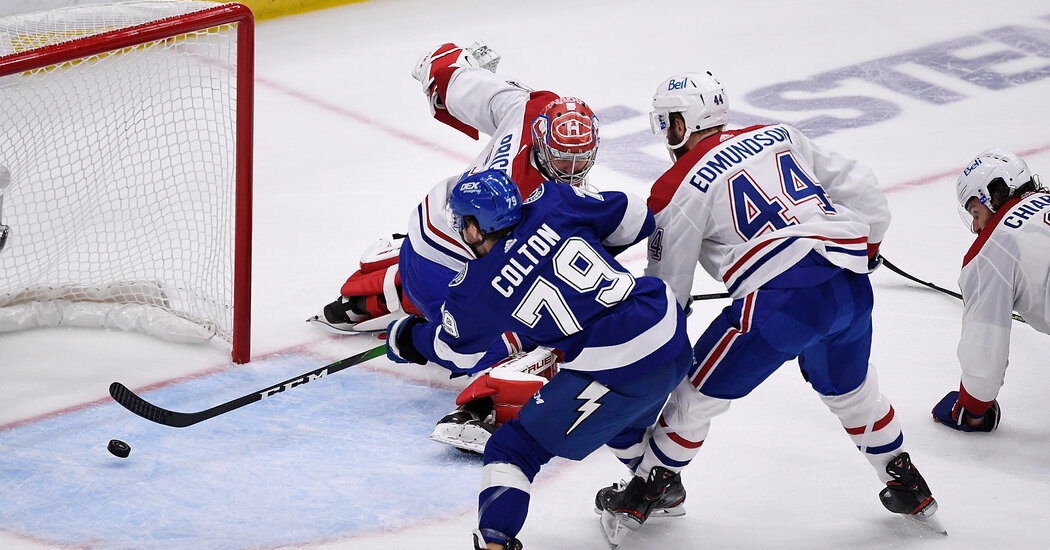 The Tampa Bay Lightning on Wednesday completed their second consecutive romp through the N.H.L. postseason, defeating the Montreal Canadiens, four games to one, in the best-of-seven Stanley Cup finals series to win their third title in franchise history.

Nine-and-a-half months after enduring a 65-day stay in Canadian playoff bubbles to hoist the silver chalice, the Lightning beat the Canadiens, 1-0, in Game 5 on home ice at Amalie Arena. In doing so, they join the Pittsburgh Penguins, in 2016-17, as the only teams in the last 15 years, since the dawn of the salary cap era, to repeat as champions.

“Now it becomes, like, a legacy thing,” Lightning Coach Jon Cooper said earlier in the series. “You talk about some of the great teams in a decade span, you’d hope that the Tampa Bay Lightning would be mentioned in that.”

In winning their last eight playoff series, the Lightning have gone 32-13 (16-6 last year, 16-7 this year). In this series, they were not behind until late in the first period of Game 4 against the upstart Canadiens, who finished 18th among 31 teams during the regular season, and with a negative goal differential, but invigorated the city of Montreal with a glorious charge to their first finals appearance in nearly three decades.

The Canadiens, bidding to become Canada’s first N.H.L. champion since 1993, outlasted Toronto, Winnipeg and Vegas, but they could not counter the comprehensive excellence of the Lightning, who outclassed Montreal at every position, including goalie, where for much of the series Andrei Vasilevskiy made the kind of saves that Carey Price didn’t.

In rampaging through this postseason after finishing third in a reconfigured one-time-only Central division, the Lightning also received a jolt from the return of perhaps their best player, Nikita Kucherov, who missed the regular season while recovering from hip surgery.

The last Canadian team to win the Cup was Montreal, in 1993, the same year Tampa Bay, heralding the league’s Sun Belt expansion, completed its inaugural season. The Lightning won their first title in 2004, then meandered in the N.H.L. wilderness for the next decade, winning only two playoff series.

But no team has won more games since the beginning of the 2014-15 season — in either the regular season or the playoffs — than Tampa Bay, which has reached at least the league’s semifinal round in five of seven years.

A team that had embraced what Cooper called a “kind of greatest show on ice” attitude, that tried to score as many goals as it could while depending on its goalie to offset its affinity for offense, needed to get “grittier” after absorbing in 2019 one of the more confounding postseason meltdowns in major professional sports history. After dashing to 62 victories in 82 games, tying a league record, the Lightning were swept in four games in the first round by Columbus.

In response, the Lightning eliminated some of the risk in their game, stressing defensive responsibilities, and added rugged but skilled bottom-six forwards like Patrick Maroon, Blake Coleman and Barclay Goodrow. They meshed with stalwarts like Alex Killorn, Steven Stamkos, Ondrej Palat and Tyler Johnson.

The Lightning circumvented the league’s salary cap by adding Kucherov for the playoffs, but they won’t be able to retain everyone for next season — especially not with the Seattle Kraken expansion draft looming — a situation that Cooper said had conferred upon this run a certain “last day of school” feeling.

“You understand the situation,” Stamkos, the team captain, said earlier in the series, “so let’s go out and do as best as we can as a group.”

That is what the Lightning did. Their coronation, altogether new and the same, came Wednesday.