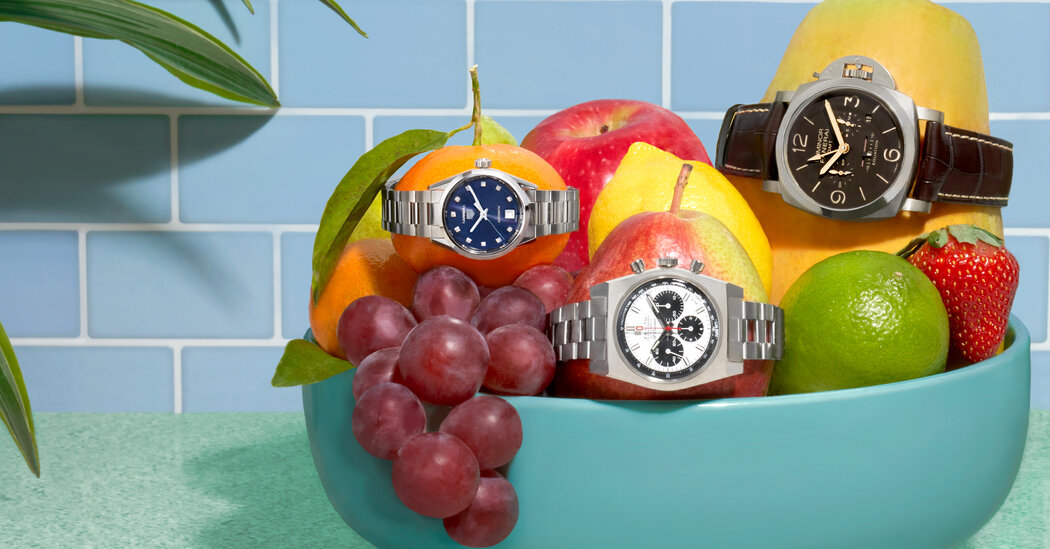 From men in corsets on the fashion runways to paper-towel ads promoting the brawn of women, changing perceptions of gender are upending the way many products are being marketed.

Even the watchmaking industry, which long catered to a mostly male clientele, shifted its focus to women in recent decades. Efforts to target female collectors produced models like the Twenty-4 at Patek Philippe, the Lady Tourbillon at Franck Muller and the Lily smartwatch at Garmin, original creations that were more than just a smaller version of an existing men’s model.

But now some brands are reconsidering the traditional male-female divide in other ways, aligning their products into more inclusive size-based categories rather than binary gender lines.

“By next month, Zenith will be removing all gender-based search functions from its website,” Julien Tornare, chief executive of Zenith, said in an interview from Geneva. The brand’s website currently divides its products into men’s and women’s collections.

“We will no longer be using terms like men’s, women’s or unisex in reference to our watches,” Mr. Tornare said. “We will just show our collections in the range of available sizes. We feel that a ‘gender’ explanation is no longer necessary.”

There are no rules when it comes to associating a watch size with a gender, although cases that measure less than 34 millimeters in diameter traditionally have been used for women’s models, while those 42 millimeters and larger typically are associated with men’s. The zone in between — 36 millimeters to 41 millimeters — is where gender demarcations are more fluid.

“Who are we to tell our clients what watch they should wear?” he asked.

And eliminating labels may open the market, Mr. Tornare said, “by removing the stigma associated with wearing a woman’s watch.”

After all, he said, “If you are a man looking for a smaller watch or one set with diamonds, you may find it difficult to shop in the ‘ladies’ catalog.”

Watchfinder & Company, the pre-owned watch specialist based in England, took similar action last year, so buyers browsing its site now can use “size” to filter models into three categories: “small” for a case diameter of less than 31 millimeters, “medium” for 31 millimeters to 39 millimeters and “large” for more than 39 millimeters.

“We feel that categorizing a watch as either men’s or women’s is now both redundant, restrictive and outdated,” Matt Bowling, the company’s co-founder, said in a news release announcing the decision. “Everyone should be able to choose whatever style they want, without being dictated as to whether it is suitable for their gender.”

The release also noted that some celebrities had moved beyond labels, with Kanye West wearing a 22-millimeter Cartier Crash and Jay-Z, a 27-millimeter Jaeger-LeCoultre Reverso Duo.

Brands have good reason to reconsider their marketing stance through the lens of inclusivity.

According to a 2021 report by Bain & Company, the luxury sector worldwide is driven by Gen Y, or Millennials, and Gen Z customers — born from the early 1980s to early 2010s — who together are expected to become 70 percent of the global luxury market by 2025. And such customers are transforming luxury brands from “makers of products” to “purpose-driven actors in the push for a more sustainable, diverse and equal society,” according to Bain.

When it comes to gender, a 2019 report by the Pew Research Center found that 35 percent of its Gen Z respondents preferred to communicate in language not defined by gender, to be addressed by gender-neutral pronouns and said forms or profiles that ask about a person’s gender should include options other than “man” or “woman.”

The watch industry, especially at the top luxury end, has never been known as being in the vanguard of change (it took a pandemic for some to embrace online sales). “Watchmaking is a conservative industry, and some established positions are hard to shift,” Mr. Tornare of Zenith said. “We must evolve with society.”

And some brands have found that strict gender-based categories get in the way of sales.

When Roger Dubuis introduced the Excalibur 36 mm Lady in 2015, its marketing department discovered that “Lady” — a term still widely used by watch brands — was an obstacle to men who were considering the model.

“Initially, we had ‘Lady’ in the product’s name, but after feedback from clients, we decided to drop it,” said Sadry Keiser, the brand’s chief marketing officer, based in Geneva. “Many of our male clients were questioning why the model was called ‘Lady.’ We realized that the gender designation was not helpful.”

The company said its focus had been less on developing its dedicated women’s line, called Velvet, than on expanding its range of sizes across other lines. “We have not had any specific female-oriented communication in three years,” Mr. Keiser said. “The notion of gender is not one we have put forward.”

“Our cases have always been on the larger side because our models, especially the skeletonized ones, are aesthetically more pleasing in a larger size,” Mr. Keiser said. “But the new 36- and 39-millimeter models are bringing in a larger clientele.”

Other brands are also experimenting with the size spectrum to expand their appeal. Tudor has added 36-millimeter and 39-millimeter models to its popular men’s 41-millimeter Black Bay diver watches.

And at Chopard, while the new Alpine Eagle comes in cases ranging from 36 millimeters to 44 millimeters, the 41 millimeter is considered the “please-all” choice.

“My wife and I both wear this watch in a 41-millimeter case,” said Karl-Friedrich Scheufele, co-president of Chopard. “Case size and weight both go to the comfort and wearability of a piece. We communicate all the features of the watch in a neutral manner, and our clients choose whatever model they want.”

But does gender neutrality restrict creativity when it comes to designing watches?

“Some brands design mainly for women, like Cartier and Van Cleef & Arpels. Others make the same watch in every size, like Rolex, Omega or Audemars Piguet,” said Eric Giroud, a freelance watch designer based in Geneva. But, “for young brands like FOB Paris, creativity has nothing to do with gender. Their designs are creative even though they make the same watches for everyone.”

Mr. Giroud noted that generally the approach to new creations has been changing.

“More and more brands ask for ‘no gender’ in their design brief,” he said. “They prefer a design that sits somewhere between a man’s and a woman’s style. What will determine the product’s ‘gender’ orientation will be the color of the dial or the type of bracelet.”

Yet even those characteristics don’t signal what they once would have. In 2020, for example, Hublot introduced its Big Bang Millennial Pink, which it advertised as gender neutral.

And while the watch’s hefty 42-millimeter case traditionally would have been considered masculine, the color was a shade between nude and pastel pink, which Hublot’s chief executive, Ricardo Guadalupe, announced as “Millennial Pink, symbolic of the world available to us, in its constant state of flux.”

This week, as part of LVMH Watch Week, Zenith planned to introduce its new 41-millimeter Defy Skyline, which Mr. Tornare called during the interview a “dynamic, urban, unisex model.” And the brand’s Chronomaster line, which comes in a range of 37-millimeter to 42-millimeter case sizes, is to be augmented with pastel-colored dials, diamond settings and new bracelet options.

“Some might consider these features to be ‘feminine,’ but that is a very subjective assessment,” Mr. Tornare said. “Men wear pastels, and, in some countries, diamonds are considered masculine.

“We are not trying be politically correct,” he added. “We are just aligning ourselves with the values of the 21st century.”