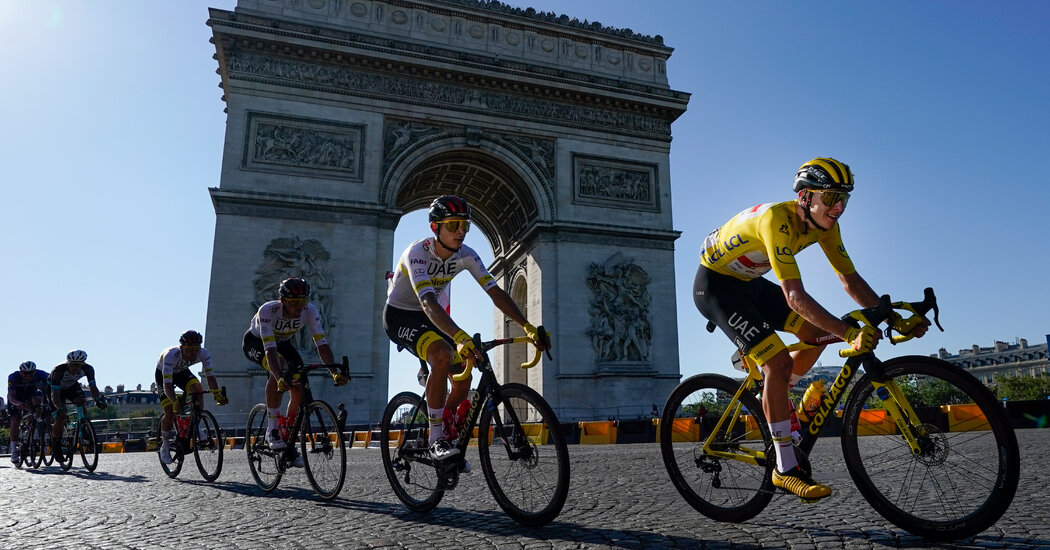 Tadej Pogacar of Slovenia won his second straight Tour de France on Sunday, entering a new era of dominance after reigning over his adversaries for nearly two weeks and leaving little room for any serious competition.

The race’s outcome had been known for days, and Pogacar, 22, entered the traditionally celebratory final stage with an unassailable lead of 5 minutes 20 seconds, a margin he maintained as he crossed the finish line. Even after Pogacar’s eighth-place finish in the time trial on Saturday, fans of the Tour were left with the overwhelming impression that there was limited competition for the young champion.

In fact, Pogacar would step onto the podium in Paris three times on Sunday, donning the yellow jersey for the general classification winner, the polka-dot jersey awarded to the Tour’s top climber and the white one awarded to its best young rider. He won the same three jerseys last year, when he became the Tour’s youngest winner in the post-World War II era.

In a sport where superlative performances are routinely shadowed by suspicions of cheating — a rival team’s bus and hotel were searched by the French police last week as part of a doping investigation — Pogacar has been hailed as a machine, a tornado, a champion who might leave his mark on the Tour’s history as past champions like Bernard Hinault and Eddy Merckx have done. Merckx, 76, said last week that Pogacar was on his way to at least five Tour de France titles; others have said the race has entered “the Pogacar era.”

Perhaps more impressively, Pogacar, racing for U.A.E. Team Emirates, defeated, almost entirely on his own, a team that had ruled the Tour for the past decade: Ineos Grenadiers, formerly known as Team Sky. By the end of the race’s first 10 days, he had also left behind his most serious challenger, Primoz Roglic, who finished second last year but abandoned the race this year after a fall in the first week.

Pogacar had won three stages entering Sunday, but his superiority has been unquestioned. Over the past three weeks, he dominated his rivals in a time trial in western France and knocked out challengers in the harrowing climbs of the Alps. Then, in the scenic landscapes of the Pyrenees last week, he claimed two impressive victories that drew admiration — and raised eyebrows — for the ease with which he dispatched two of the race’s top contenders, toying with them during the final miles of a daunting ascent.

“Is it a game for you?” a journalist asked Pogacar on Thursday after he completed the 18th stage at the top of Luz Ardiden ski resort, where he had left behind his two most serious adversaries, Richard Carapaz and Jonas Vingegaard, with only a few powerful strides.

“Yes, of course,” Pogacar replied with a grin. “I enjoy playing it.”

Vingegaard of Denmark, and Team Jumbo-Visma, finished second overall, 1 minute 43 seconds ahead of Carapaz of Ineos. No other rider was within 10 minutes of Pogacar.

For Pogacar, the game started on June 30, when he won a first individual time trial in the fifth stage. Three days later, the peloton was in the Alps, and Pogacar was already winning the game, ripping through his adversaries on Stage 8 and grabbing the yellow jersey. He never gave it up.

That day, he said he had told his teammates that they should “try to break the race.” And break the race he did: Pogacar’s lead of 1 minute 48 seconds at the end of the eighth stage had grown to more than five minutes by the time the race hit southern France four days later.

Although Pogacar argued that the race was not over, many knew then how it would end.

In the penultimate stage on Saturday, Pogacar rode across the vineyards of the Bordeaux region with a mix of prudence and distraction, confident that, this time, the final time trial would not be a game changer.

A year ago, he had used a similar race against the clock to turn the tables in the final weekend of the race. This year, the job, for all intents and purposes, was already done when he rolled off the starting line. Now he just had to close it out, avoid disaster, defend an insurmountable lead — and then carry it into Paris and claim his prize.

This year’s Tour still brought its unexpected moments. On the first day, an inattentive fan caused a serious crash with a cardboard sign that sent dozens of cyclists tumbling to the road; she will face trial in October. Pogacar was challenged during Stage 7 in one of the most surprising stages in years, leaving observers to wonder if he could actually win. A day later, he was in the yellow jersey.

By last week, he was in complete control, even as the shadow of doping allegations returned when the police raided the hotels of the Bahrain Victorious team. The team had won two stages on the Tour, but it is now the target of a doping investigation opened by the local authorities in Marseille.

But these events will all be secondary. The 2021 edition of the Tour will be remembered as the one when Pogacar, no longer a surprise, morphed into an unstoppable champion.

His superiority was on full display Wednesday and Thursday, when he won two stages in a row in the Pyrenees.

In the final climbs of Stage 17, leading to the Col du Portet, Carapaz tried to overtake Pogacar by leading an attack less than a mile from the finish line. As Carapaz grimaced in pain, driving himself in one last push for the yellow jersey, and started to crack, Pogacar stuck right on his back wheel, calm and almost expressionless.

With 330 feet to go, Pogacar cut out from behind him, accelerated and was gone. His adversaries — Carapaz and Vingegaard — were left behind in just a matter of seconds, as if frozen on the spot.

It was Pogacar’s first victory on the Tour in the yellow jersey, and on Thursday he repeated the feat in the 18th stage, accelerating when there was less than half a mile to go, on a grueling climb with a 14 percent incline, once again dropping Vingegaard and Carapaz in a matter of seconds.

That day, it felt as if a driver in a car had just overtaken a group of cyclists. “It’s unbelievable,” Pogacar said. And for many, the back-to-back performances remain hard to believe.

Pogacar’s feat has been so impressive that observers have openly raised some doubts. The French newspaper Le Monde wrote that the “taboo of doping” was flying over his performances like “a vulture above the herd,” comparing his seemingly effortless exploits to those of the disgraced former champion Lance Armstrong.

And on Friday, after unnamed riders told the Swiss newspaper Le Temps that they had heard “strange noises” coming from the bikes of four teams, including Pogacar’s United Arab Emirates squad, Pogacar said he didn’t “know what to say.”

“We don’t use anything illegal,” he added.

Pogacar has never tested positive for illegal substances. Instead, on Sunday he was crowned again on the Champs-Élysées for what he has become: one of the best riders of his generation.

This year, rather than a late twist, everybody saw Pogacar’s victory coming for weeks. But his next challenge is not far-off: He will compete on Saturday against his countryman Roglic, Ecuador’s Carapaz and dozens of other Tour rivals on the lower slopes of Mount Fuji for the men’s road race gold medal at the Tokyo Olympics.