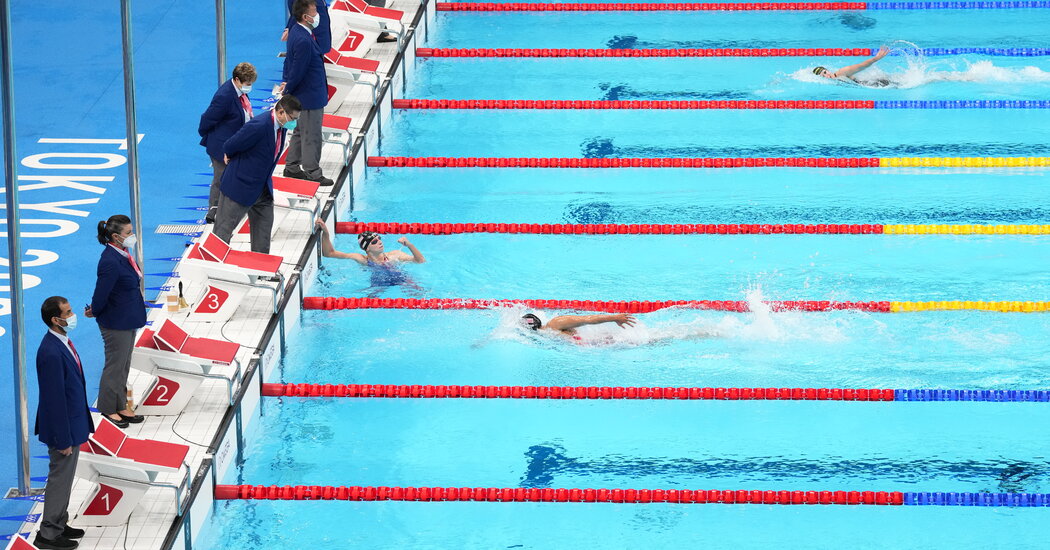 In her third Summer Games, Katie Ledecky was finally able to swim for Olympic gold in what is essentially her best event: the 1,500-meter freestyle, the longest race contested in the pool.

The distance has been available to men since the 1904 Olympics, when it was introduced as a mile race. Women who contested the event in other meets had to settle for the 800 meters at the Games, an event that Ledecky will try to win for a third time on Saturday.

On Wednesday morning, though, she finally got her chance in the inaugural women’s 1,500 and delivered her first gold of the Tokyo Games. Ledecky’s time of 15 minutes 37.34 seconds was more than four seconds faster than her American teammate Erica Sullivan (15:41.41), who won the silver, and more than five seconds ahead of the bronze medalist, Sarah Kohler of Germany (15:42.91).

Ledecky holds the world record in the 1,500 and had the top qualifying time on Monday. Her victory in the event — a grueling marathon that requires 30 trips the length of the pool — came a little more than an hour after Ledecky had finished fifth in the 200 freestyle final.

Ledecky has won three 1,500-meter world championships and has set world records six times, more than any other swimmer in the event, male or female. But in just competing at this distance in the Olympics, Ledecky was getting an opportunity denied to distance-swimming greats like Janet Evans, Debbie Meyer, Shane Gould and Jennifer Turrall.

Until 1968, the longest Olympic event in women’s swimming was 400 meters. Meyer won the first 800-meter Olympic race for women at the Mexico City Games that year, as well as the 200 and 400 freestyle.

She held the world record in both the 800 and the 1,500 back then, and she told The Times in 2014 that she questioned why the longer race was not available at the Olympics. Meyer said she had been told that there weren’t enough countries with women competing in the 1,500.

“It really was all about the thinking then,” she said, “which was, women were the weaker sex and because men were stronger people, they could last the distance.”

Over the years, other discrepancies in swimming have been resolved. From 1984 to 1996, for example, the men had three relays and the women two. At the Atlanta Games, the women gained parity, with a 4×200-meter freestyle relay.

But FINA, the international governing body for aquatics, had long resisted allowing women to compete in the 1,500 at the Summer Games, despite efforts in every sport to make the Olympic experience equal for women and men.

In 2015, Julio Maglione, the FINA president, said he doubted that the 1,500 could be added to the Olympic program, which was already packed with races at multiple distances for every stroke.

Yet now, not only have women gained the 1,500, but male distance swimmers also have an 800 on their schedule for the first time since 1904. A mixed medley relay has been added, with two men and two women on each team.

The longest swim in Tokyo, however, will not take place in the pool. The 10-kilometer open-water event was added to the Olympics in 2008, with races for men and women.