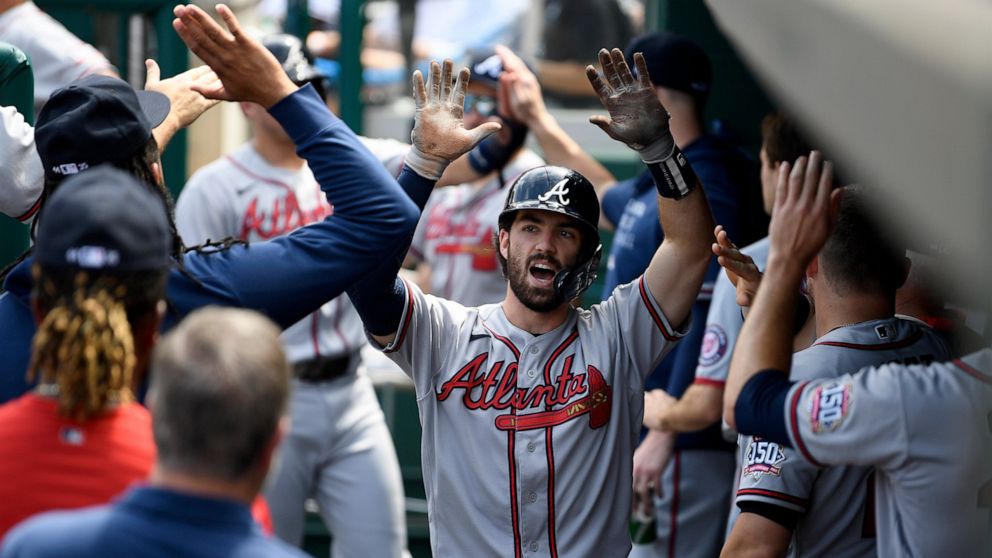 WASHINGTON — Dansby Swanson homered for the third straight game and the Atlanta Braves beat the Washington Nationals 6-5 Sunday to sweep the series.

Swanson hit a two-run drive to center to increase the Braves’ lead to 3-0 in the third. It was his 24th home run of the season, a total that includes two from Saturday and another Friday for four of Atlanta’s 11 homers in the three-game set.

The Braves have won a franchise-best eight straight games in Washington and 10 of 12 overall. They entered Sunday tied with Philadelphia for the NL East lead.

Jesse Chavez (3-2) allowed two runs on three hits, and Will Smith worked a scoreless ninth to earn his 25th save. Smith allowed two walks but struck out Victor Robles and Juan Soto.

The Nationals have lost a season-high seven straight and are 10-30 since July 1.

Washington tied it with a three-run third. Robles had an RBI single, Adrian Sanchez scored on a wild pitch from Braves starter Drew Smyly and Soto had an RBI sacrifice fly to score Robles.

Freddie Freeman momentarily took the team lead with his 25th homer to lead off the fifth. Two pitches later, Austin Riley joined him with his 25th of the season as the Braves took a 5-3 lead and knocked out Nationals starter Paolo Espino (3-4) in the process.

Freeman and Riley both broke a tie with Ronald Acuña Jr., who last played on July 10 and is out for the rest of the season after right knee surgery.

Cartier Kieboom hit a two-out, two-run single to bring the Nationals back to within 6-5 in the fifth.

Nationals: Placed RHP Joe Ross on the 10-day injured list (retroactive to Aug. 12) with a partial tear of his right elbow ulnar collateral ligament and recalled OF Lane Thomas. Thomas made his Nationals debut in left field, singled in his first two at bats and finished 2 for 4 with a walk.

Braves: RHP Touki Toussaint (1-2, 4.28 ERA) will take the mound as Atlanta beings a three-game series at Miami on Monday.

Nationals: RHP Erick Feede (4-8, 5.12 ERA) will start at home against the Toronto Blue Jays on Tuesday.