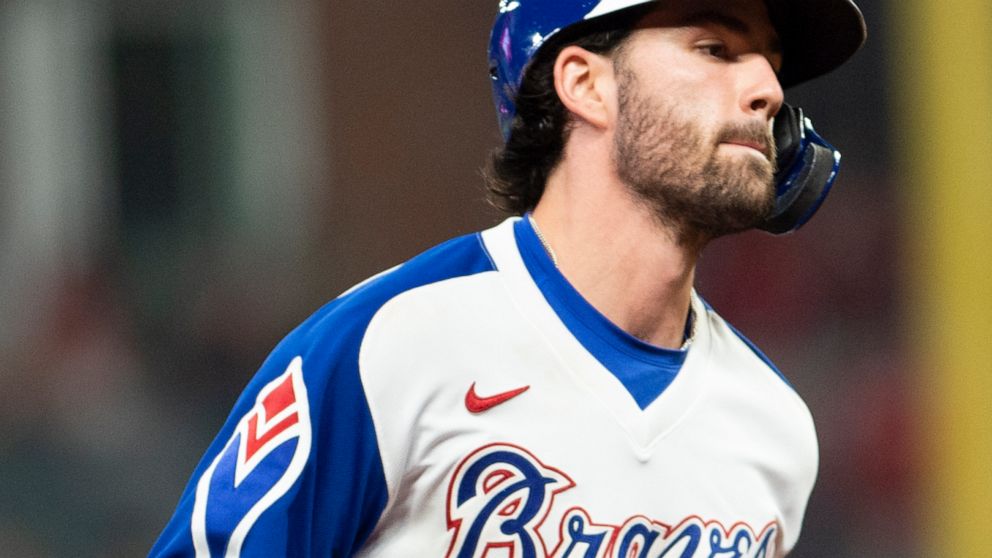 ATLANTA — Dansby Swanson hit a grand slam and a two-run shot and drove in a career-high seven runs to lead the Atlanta Braves to an 8-1 win over the Milwaukee Brewers on Saturday night.

Swanson had three hits, including his second career grand slam in the seventh off John Curtiss. The grand slam bounced off the foul pole in left field and came only nine days after his first career grand slam on July 22 against Philadelphia.

“It’s kind of wild, isn’t it?” Swanson said. “It makes me feel like a kid again. … I had never hit a grand slam in my baseball life. To have two in 10 days is special.”

Swanson has set a career high with 20 homers.

Swanson broke a 1-all tie with a two-run homer in the sixth, one pitch after it appeared he struck out. His run-scoring single in the fourth tied the game at 1-1.

After Adam Duvall led off the sixth with a single off Brandon Woodruff, Swanson took a 2-2 pitch. Home plate umpire CB Bucknor called the pitch a ball as Swanson took a half step toward the dugout, believing he struck out.

“I thought it was a strike just like I think everybody else did, too,” Swanson said. “I’ll be honest about that. … I regrouped and was able to get a good swing on the next one.”

Swanson hit the next pitch over the wall in left field, giving Atlanta a 3-1 lead. Woodruff was pulled and yelled at Bucknor as he walked off the field.

“I just think in that situation at that point in the game that can’t be missed,” Woodruff said. “… You’ve got to move on, but yes it’s disappointing for sure.”

Brewers manager Craig Counsell said: “It was strike three. I think the hitter told us that, too.”

The Braves scored five runs in the seventh off Curtiss, who made his Milwaukee debut.

Woodruff hit Joe Pederson’s foot with a pitch to open the fifth. Ozzie Albies doubled off the right-field wall, and Pederson was thrown out at the plate on Kolten Wong’s relay throw from Avisaíl García.

Eduardo Escobar made his first career start at first base, one night after hitting a homer in his Brewers’ debut while playing third base. He reached for a throw after third baseman Luis Urías made a diving grab of Austin Riley’s grounder and threw across the diamond to end the first inning.

Jorge Soler, acquired by Atlanta in Friday’s trade with Kansas City, had three singles in his Braves debut, including a bases-loaded infield single off Curtiss in the seventh.

Two injured Braves pitchers could be moving closer to a return to the rotation. RHP Ian Anderson (inflammation right shoulder) threw on the side on Friday and is expected to throw again on Monday. RHP Huascar Ynoa, on the injured list since mid-May after breaking a bone in his right hand when he punched a bench, will make a rehab start with Class A Rome on Sunday. … LHP Sean Newcomb and INF/OF Orlando Arcia were optioned to Triple-A Gwinnett to clear roster spots for RHP Richard Rodríguez and Soler.

Swanson’s 20 homers matched the Braves’ franchise record for a shortstop. Denis Menke hit 20 homers in 1964 for the Milwaukee Braves. “The power, the ball off the bat, has been something else,” said Braves manager Brian Snitker.

Counsell announced before the game that right-handers Jake Cousins and Hunter Strickland tested positive for COVID-19. A third reliever, Jandel Gustave, was forced to miss the game due to contact tracing.

Earlier this week, star outfielder Christian Yelich tested positive for the coronavirus and was showing mild symptoms. Utilityman Jace Peterson was sidelined at the time due to contact tracing.

Counsell said Cousins and Strickland had been vaccinated and were tested after developing symptoms. Two relief pitchers acquired in trades on Friday, Curtiss and Daniel Norris, made their Brewers debuts.

Brewers: LHP Brett Anderson (3-5, 3.86) will start for Milwaukee when the teams play their sixth and final game of the season.

Braves: RHP Charlie Morton (10-3, 3.72) will look for his sixth consecutive win over a span of nine starts.