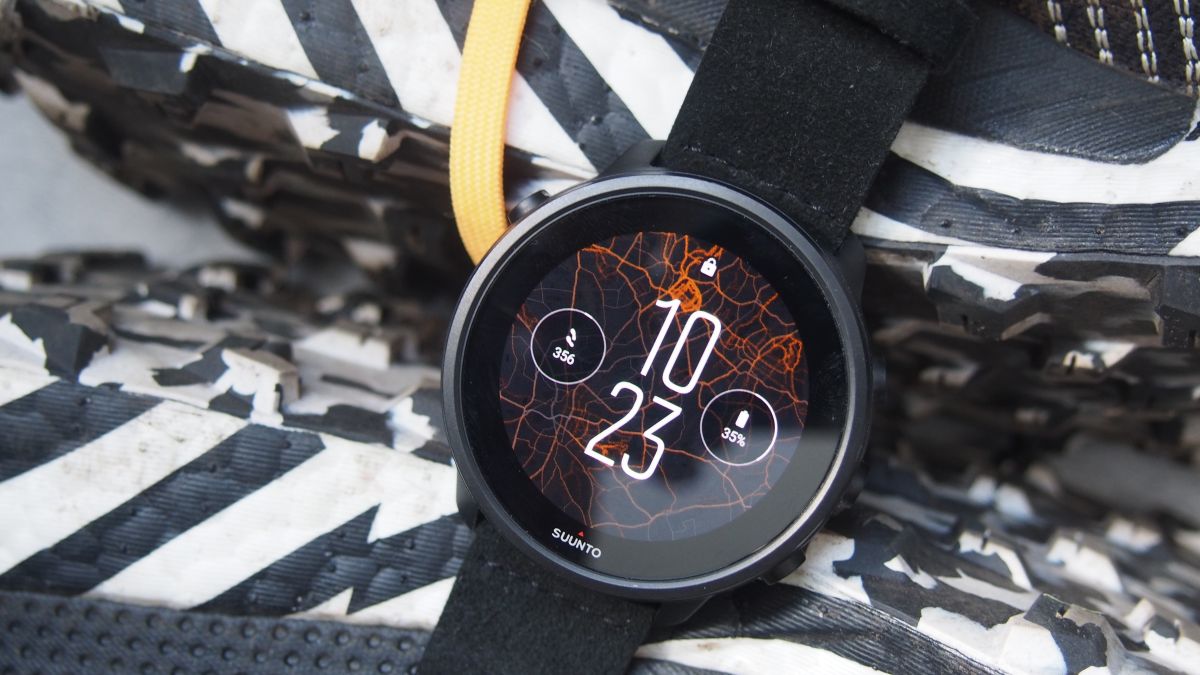 The Suunto 7 is a Wear OS smartwatch that’s built for sports tracking and marks the first time the company has delved into the world of proper, full fat smartwatches.

The 50mm sized smartwatch packs an impressive 1.39-inch, 454 x 454 resolution AMOLED and the key hardware features to make it a good outdoor companion. That includes built-in GPS with the ability to view colour maps and download them for offline use. There are also heatmaps supported for a variety of activities to help find popular routes in new areas.

Suunto provides its own sports tracking software, which supports up to 70 activity modes and that includes cycling, open water swimming and more niche pursuits like dancing and obstacle racing where more basic real-time metrics are on offer.

There’s also Wear OS here too with Google providing staple features like notifications, Google Pay, the ability to download apps and music controls. The software on the whole is powered by Qualcomm Snapdragon 3100 processor alongside 1GB RAM and 8GB of storage. While that delivers an overall slick performance, it could mean that the 7 may not be in the running to get updated to the new Google Wear OS update being built by Google and Samsung.

Sports tracking is solid on the whole with GPS distance tracking holding up well against a Garmin Enduro sports watch. Heart rate monitor accuracy and battery drop-off from tracking however isn’t great and you could get a better performance for less money.

There are some really likeable qualities about the Suunto 7, but ultimately it’s undermined by some of the same issues we’ve seen time and time again on Wear OS smartwatches. The battery life doesn’t seem great, the software particularly on the Google side feels undercooked and that uncertainty over whether it will get that big new Wear OS update is a big problem for anyone thinking of buying the Suunto 7 right now.

There’s certainly nothing subtle about the look of the Suunto 7 with its hulking 50mm case making it bigger than your average Wear OS smartwatch.

You’ve got your pick of eight different looks, and Suunto offers the glass fiber reinforced polyamide case with either a stainless steel or a lighter (and more expensive) titanium bezel.

You can also grab it with a silicone strap or the newer microfiber textile strap for a softer feeling band that can still hold up when things get sweaty. Those straps can be removed if you want to mix those looks up.

The titanium version we had to test weighed in at 50g compared to 70g for the stainless steel model, so spending more will get you a big smartwatch that’s lighter on the wrist. Both options are water resistant up to 50 meters, making them good for swimming and jumping in the shower.

There are four physical buttons in total for navigation (three on the right and one on the left of the case), which is more than your typical Wear OS watch.

Front and center is a 1.39in, 454 x 454 resolution AMOLED touchscreen display, which has Gorilla glass to make it more durable for outdoor adventuring. It’s a pleasingly sharp, colourful display that’s bright too with a sunlight boost feature that aims to give that AMOLED screen a brightness kick where it can sometimes struggle for visibility in bright outdoor light. You do also have an always-on display mode, though with a small amount of battery to play with, you might want to think about whether you want to put it in play.

Suunto is known for its sports tracking, particularly when it comes to exploring the big outdoors, so it’s bringing features that are well suited to when you want to go adventuring.

On the sensor front, you’re getting built-in GPS, and support for GLONASS, QZSS and Beidou satellite systems. You’re getting an altimeter to track altitude and there’s an optical heart rate monitor to track heart rate during exercise and during the day. That HR sensor data also feeds into training features like training load and recovery and training effect to better optimise when to train and when to save those tougher sessions.

While you do have access to third party apps and Google’s own Fit apps to track exercise, Suunto includes its own software to cover this, which you can access from the top right physical button. From here you have access to core modes for running, cycling and swimming (pool and open water), with sub-categories such as trail running and indoor cycling.

For runs, you can choose to connect to Google Fit and more interestingly, follow routes. Those routes are created on the Suunto app and then synced with the watch, which you can follow as a breadcrumb trail in real time. You also have control over how those maps are displayed, whether you’re tackling trails or want to tap into the heatmaps, which will show you popular routes.

You also have the option to download maps for offline use here too. So once you create that map up to a maximum of 50km, it’ll be downloaded when you drop the watch back on its charger and the watch is connected to Wi-Fi. They’re nice detailed maps to follow and are definitely one of the highlight features on the Suunto 7

On the accuracy front, we put it up against the Garmin Enduro and it largely matched for GPS-based distance tracking and metrics like average pace. It didn’t do so well with heart rate though, with maximum readings at times over 20bpm off a Garmin HRM-Pro chest strap heart rate monitor, with a 10bpm difference in average heart rate readings. Switching to indoors and for rowing workouts, that heart rate monitoring was a lot more consistent and was at most 1bpm off a chest strap.

In the Suunto companion app, there’s a rich amount of data to delve into. You can explore your fitness and fatigue levels, calorie burns. Suunto now also lets you track things like step counts and sleep monitoring instead of relying on Google Fit. Step counts in general were in line with Garmin’s fitness tracking.

Once you enable sleep monitoring from the Suunto app on the watch you can start tracking that bed time. That sleep data also powers a body resources insight that looks at activity, stress tracked and recovery to see what resources you have at the beginning of each day.

It’s certainly a better sports watch than fitness tracker, and Suunto’s decision to take a strong lead on those sports features was a smart move as Google’s aren’t really up to scratch.

Works with Android and iOSRuns on Wear OSSuunto sports apps

The Suunto 7 is the first time Suunto has decided to look outside of its own software to essentially bring in the smartwatch features it hasn’t really offered on its own watches.

It’s opted for Google’s Wear OS, which will be going through a pretty major overhaul with Google teaming up with Samsung to overhaul the smartwatch platform. Suunto has yet to confirm whether the 7 will be updated to the latest version, and it seems that it may well miss out on the new update or have a wait to get it. So for now you’ve got something that runs on Wear OS 2.0.

That gives you all the usual Wear features like access to download apps from the Google Play Store, pay for things with Google Pay, view smartphone notifications and access Google’s suite of Fit apps. With Google Play Music now YouTube Music, you miss out on that offline playlist syncing support, which will be reinstated for third party apps like Spotify for Wear OS 3.0. Though as mentioned, there’s no news whether the 7 will get in on that action.

Suunto does offer some of its own software here too, but that is dedicated to sports tracking, which are essentially assigned to the three physical buttons on the right side of the watch case with the solitary one dedicated to getting you to that familiar Wear OS app screen.

If you’ve used a Wear OS smartwatch before, then the experience will feel very familiar. You can swipe up from the main watch screen to view your notifications tray, swipe down to view quick settings and swipe and swipe left to view Tiles (widgets). These Tiles are a mix of Google’s own and Suunto’s too, so there’s some crossover with the software, but it doesn’t make for a confusing place to get around.

Features like Google Pay and notifications work without any major issue and the combination of Google and Suunto’s software is by and large complimentary. Performance-wise, there’s a Qualcomm Snapdragon 3100 processor alongside 1GB RAM and 8GB of storage. So it’s not the latest 4100+ platform, but generally swiping through screens and launching apps was a slick enough experience.

Suunto doesn’t specify the capacity of the battery it’s packing, but it’s clear it comes up short compared to other watches in its collection like the Suunto 9 and the Suunto 5.

The Suunto 7 promises up to two days when used as a smartwatch and on average with some sports tracking in play it was around a day and half in our testing time. Battery drop-off over night was around 25% and when you put GPS into play, an hour of outdoor running saw the battery drop by over 20% compared to less than 5% on a Garmin Forerunner 55.

There is the option to switch to a ‘Good’ GPS tracking and battery saving GPS modes, which will sample GPS data less frequently than the optimum option. Ultimately though, for that best accuracy, you’re going to be reaching for the proprietary charging cradle on a pretty regular basis if you’re spending a good amount of time tracking your outdoor exercise.

If you really want to strip things back and just use it to view the time, Suunto does offer a basic Battery Saver mode, which lets you view the time and that’s your lot.

You like a big, but light smartwatchIf you favour the look of a hulking watch case but don’t want the extra weight that usually goes with it, the titanium version of the Suunto 7 should definitely appeal.

If you want big battery life for sports trackingWhile there are power saving modes on board, the Suunto 7 comes up short in the battery department when you need to track outdoor workouts and day-to-day battery drop-off isn’t great either.

You don’t want to spend bigFor less money, you could look at Garmin or Polar to get a strong all-round sports tracking experience and better battery life to go with it.

If Wear OS 3.0 update uncertainty is a concernIt’s tough to recommend a smartwatch that could potentially end up missing out on the biggest overhaul of Google’s smartwatch platform since it first launched.