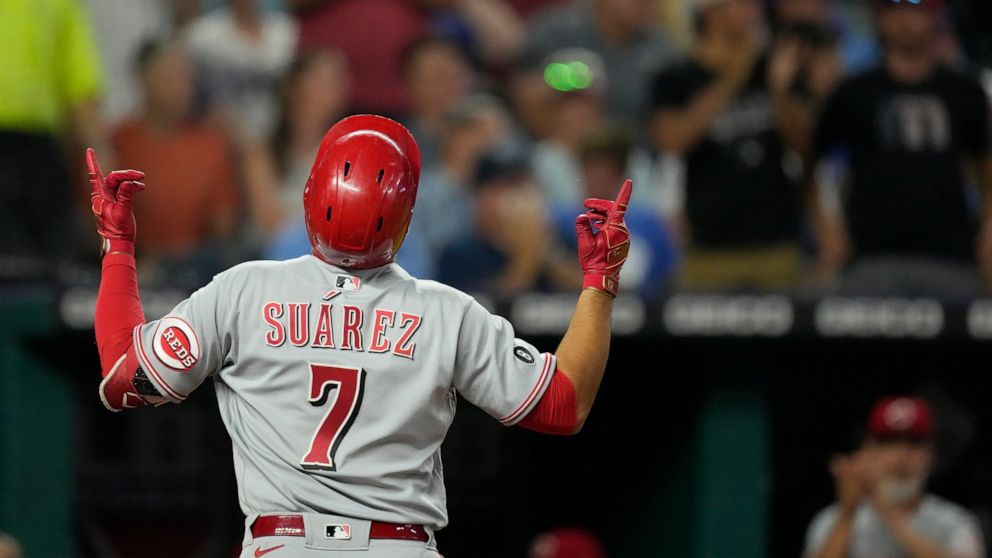 Suarez hit a 1-1 pitch off the Royals Hall of Fame in left field to give his team a three-run lead in the seventh inning. The homer was his 17th of the season and came off Kyle Zimmer against his first batter of the game.

“It’s never comfortable being down late, but there is growing confidence we can come back in games,” Reds manager David Bell said. “That was a big blow, but Castellanos’ homer was big, too.”

“I felt really good out there and throughout the week have felt good,” Gutierrez said. “I’ve been looking at what went wrong in the last start and just focus on getting better.”

Mike Minor (6-7) pitched well until the seventh inning when Castellanos turned on the first pitch he saw and drove it over the left-center field fence to tie it at two. It was also Castellanos’ 17th homer.

“That’s probably the best start we’ve had all season,” Royals manager Mike Matheny said. “It was leading to be a special start, but some came out of nowhere.”

The Reds added a run in the ninth after Aristides Aquino’s triple and an RBI single by Tyler Naquin.

Kansas City’s Jorge Soler hit an RBI double to break a 1-1 tie in the sixth inning. It was his first RBI in 18 games.

In the second inning, the Reds got on the board first after a double by Tyler Stephenson and a single by Joey Votto. Suarez then grounded into a double play that scored a run.

Nicky Lopez doubled and scored after Carlos Santana’s RBI double in the third inning to tie it at 1.

The Reds have won five in a row while Kansas City has lost 11 of its last 13.

Cincinnati: INF Jonathan India was scratched from the lineup due to a sore ankle after being involved in a tough slide play at second on Sunday. It’s not expected he’ll be out long, according to manager David Bell.

Cincinnati will send Luis Castillo (3-10, 5.14) to the hill tomorrow and the Royals had yet to announce a starter.