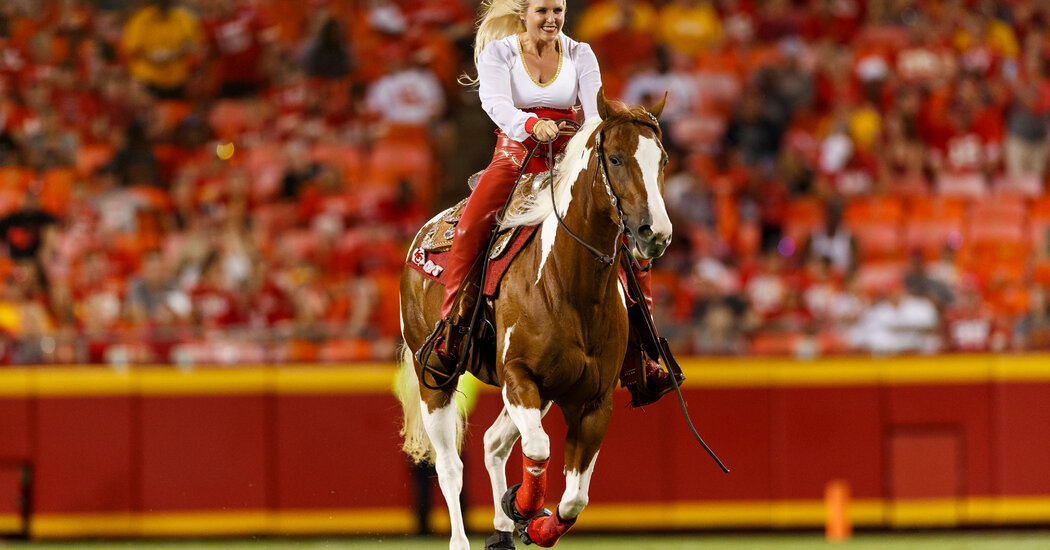 Three days after Cleveland’s baseball team changed its name from Indians to Guardians, after decades of protests about the sports world’s use of Native American imagery, the Kansas City Chiefs said on Monday that the team was retiring its mascot, a horse named Warpaint.

The N.F.L. team in Kansas City, Mo., will remain the Chiefs, however, like baseball’s Atlanta Braves and the Chicago Blackhawks of the N.H.L., which have said they have no plans to change their names.

The Chiefs’ decision on Monday comes after years of pressure from Native American groups on sports teams with discussions of racist names, offensive iconography and cultural appropriation surrounding franchises like the Chiefs, which a year ago decided to prohibit headdresses and face paint just a month after the N.F.L. Washington team dropped “Redskins” from its name. The Cleveland team had decided to make a switch in December, though it announced the new name just last Friday.

“Obviously, we knew about the Cleveland decision a year-plus ago, so we knew this was going to happen,” Mr. Donovan said at a news conference, on Monday, two days before the official start of training camp. “It doesn’t really change our approach.”

According to the Chiefs’ website, Warpaint, a reddish brown and white mare born in 1998, is ridden by a cheerleader on game days and dashes across the field every time the Chiefs score. The original Warpaint was ridden by a man in headdress when the team played at Municipal Stadium from 1963 to 1971, according to The Kansas City Star.

The Kansas City Indian Center, a nonprofit organization that is trying to change the football team’s name, said in a statement on Facebook in reaction to the team’s decision to retire Warpaint that “no longer using a race of human beings as a mascot is also the right thing to do.”

Alicia Norris, a co-founder of the Florida Indigenous Rights and Environmental Equality, protested the team’s name at the Super Bowl this year in Raymond James Stadium, where the Chiefs lost to the Tampa Bay Buccaneers. She said the team’s decision to retire the mascot “falls short” of what many in the Native American community want.

“It just feels piecemeal,” Ms. Norris said. If the team wants to be respectful of Native Americans, she said, it should “change their name and go all the way.”

The Chiefs decision to prohibit fans from wearing ceremonial headdresses and Native American-style face paint at its Arrowhead Stadium stemmed from discussions that team officials had with Native American leaders, who urged the team to do away with offensive symbols and imagery.

The Chiefs also changed their “Arrowhead Chop” motion, which had been performed by fans and cheerleaders at games by moving their arm with an open hand, in a tomahawk-like manner, capping it off with a made-up war cry. Now, the “Arrowhead “Chop” is supposed to be done with a closed fist.

“We made some significant changes last year, which we are proud of and we believe were the right things to do,” Mr. Donovan said.

The American Indian Working Group, which is made up of eight people who have “experience working in intertribal communities,” was convened by the Chiefs seven years ago to help team officials learn more about Native American culture.

Starting in 2014, Native Americans were invited by the Chiefs onto the field for a “drum blessing ceremony” in which representatives from the Native American community blessed the Chiefs’ drum before each home game.

Last year, the N.F.L. team in Washington, under pressure from corporate sponsors, changed its team name from Redskins, which had long been considered a racial slur, to Washington Football Team. It is still in the process of choosing a permanent name and logo.

The Chiefs, along with the Chicago Blackhawks and the Atlanta Braves, have similarly been in the spotlight about the team name, which some Native American groups say is offensive.