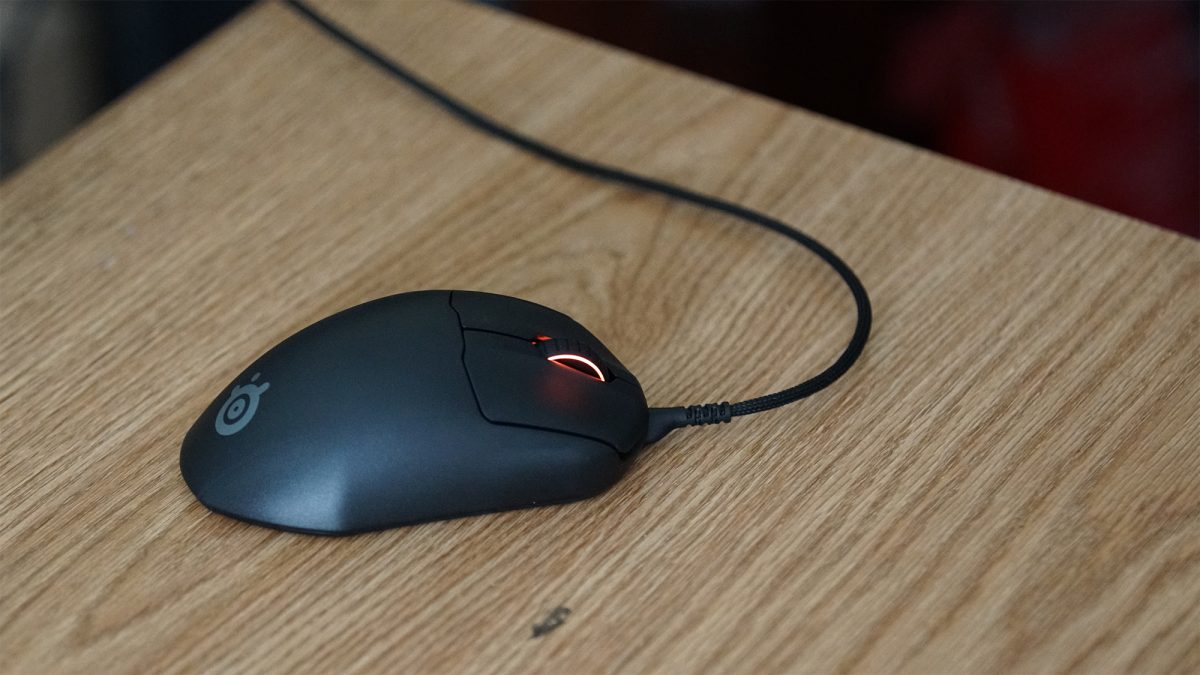 The mid-range segment of esports focused gaming mice is perfect if you want to stay within the sub-$100 range while avoiding the “budget” territory. Compared to similarly priced gaming mice including the Roccat Kone Pro, Razer Viper 8K and Logitech G502 Hero, the SteelSeries Prime+ stands tall amongst the competition.

Weighing 71g, the SteelSeries Prime+ features Prestige OM switches good for over 100 million clicks and TrueMove Pro+ sensor with dedicated secondary depth sensor which allows it to excel performance wise. Meanwhile, the undercarriage located OLED screen allows for a level of mouse customizability that nearly reaches app suite levels. Though the lack of dedicated CPI adjustment buttons is a problem if you need to make quicker configurations, the OLED screen and intuitive user interface is an awesome substitute.

Available only in a solid black color, the Prime+ is beautiful to look at from top to bottom. The lines are sleek yet aggressive while the grey SteelSeries logo on the palm rest serves as a suitable accent. Side buttons sit slightly sunken inside the mouse chasses and don’t feel like a separate component. Click buttons are wonderfully placed with the attractive illuminated scroll wheel serving as a visual centerpiece. On the bottom of the Prime+ is that gorgeous OLED screen and single button for use during configuration.

Visually, this mouse checks all the right marks. The only small blight against the design is the outdated usage of micro-USB, but it’s not much of an issue considering similarly priced mice don’t offer a detachable option.

Holding the Prime+ feels amazing for both short or long gaming sessions. Weighing exactly the same as the Razer Viper 8K, it sits between the purposefully heavier Logitech G502 and lightweight Roccat Kone Pro. This means the Prime+ isn’t easily destructible or significantly heavy. A nice textured matte material adds to comfort too.

After pulling the case out of the orange Prime+ box, the only viewable phrase is simply “For Glory” in white. The SteelSeries mouse makes good on the motto, as the competitive edge is serious. The response to clicks feels tactile due to the Prestige OM switches, which utilize a specially-milled neodymium magnet. This allows every click to actuate the same amount of release force. Wheel scrolls offer the same premium feel too. Just be mindful that those crispy clicks and scrolls can get pretty noisy.

Alongside the smooth weight and shell texture, the TrueMove Pro+ sensor couldn’t feel any smoother. The Prime+ just glides effortlessly for general PC usage or gaming. Everything about the gaming performance of the Prime+ feels absolutely accurate and precise.

During a Call of Duty: Black Ops Cold War multiplayer match with the Prime+, it’s a thrill to reach the highest kill count in Hardpoint against players with significantly higher rankings. The same victorious results come during other competitive games from PUBG to Rainbow Six Siege. More recently released single-player games like Doom Eternal, Resident Evil Village and Destroy All Humans felt just as good.

As mentioned before, the Prime+ OLED screen allows customization over several settings including CPI, Polling, Liftoff Distance, scroll wheel illumination and other options. It’s fairly easy to use after a while. To open the menu, just hold the button to the right of the screen. Once there, use the scroll wheel to switch between options and click the wheel scroll button to make selections. To go back, just hit the same button next to the screen.

By default, pressing the button allows users to cycle between CPI settings. Again, this doesn’t 100% beat having dedicated CPI adjustment buttons but it’s more than good enough. Individuals who want to have particular settings for particular games will be disappointed to know that the Prime+ doesn’t offer in-mouse profile switching. This means the mouse is definitely catered more toward single purpose users.

If the OLED screen isn’t enough, the SteelSeries GG app works great while offering more  customization options. Users can re-assign buttons, edit macros and even personalize the OLED base screen through a grid editor.

You need a phenomenally gaming mouse blending style and comfort within the $80 price rangeThe SteelSeries Prime+ is a wonderfully built gaming mouse and comfortable for long or short sessions.

You want the best driverless configuration option availableThe OLED mouse configuration is a breeze to use despite a slight learning curve.

No dedicated CPI Adjustment buttonsThe OLED screen for mouse adjustments are fine and provide a lot of customization options. Those who need simple and fast CPI adjustments may have some issues.

You want in-mouse profile switching Settings can be changed on the OLED screen and SteelSeries GG app but, there aren’t any individual profiles.