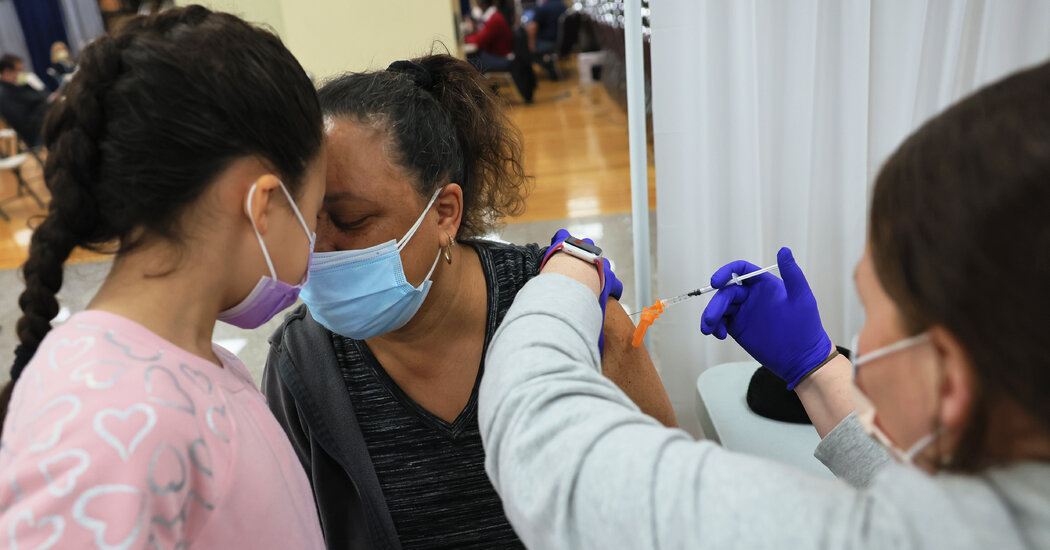 As concern grows over the highly contagious Delta variant of the coronavirus, some parts of New York City are seeing an uptick in Covid-19 cases.

The seven-day average rate of positive test results increased to 1.27 percent as of Saturday, according to the latest data from the city health department, after weeks of declining cases and low hospitalization rates.

On average, there were 328 new confirmed and probable cases daily over the last week.

Here’s what to know:

Staten Island has the highest test positivity rate in the city at 2.45 percent. The borough reported 113 cases in the last seven-day period, and is home to ZIP codes with the top three hospitalization rates in the city.

Dr. Dave Chokshi, the city health commissioner, said Staten Island’s increase in positive cases is likely due to the number of younger residents who are unvaccinated.

“It’s perhaps the most dangerous time to be unvaccinated,” Dr. Chokshi said during a news conference on Monday. “That’s why we have ensured that our vaccination efforts are proceeding with as much urgency as possible to be able to extend the protection of vaccination to as many people as we can.”

New York State lifted virtually all pandemic-related restrictions on June 15, after 70 percent of adult residents had received at least one dose of the vaccine. Dr. Wafaa El-Sadr, a professor of epidemiology at Columbia University, said the rise in cases is a reminder that the pandemic is not over.

“This should be a wake-up call,” Dr. El-Sadr said, adding, “Every effort must be made to enhance vaccination uptake, encourage testing and remind people of what they can do to protect themselves and their loved ones.”

During the news conference on Monday, Mayor Bill de Blasio emphasized the importance of getting more New Yorkers vaccinated through community efforts such as mobile vaccination sites, in-home vaccinations and referral bonuses for getting vaccinated.

As of Monday, 4.4 million New Yorkers have been fully vaccinated and 4.8 million have had at least one dose, Mr. de Blasio said.

“All the effort that was put in before is the reason why the hospitalization rate has gone lower and lower,” Mr. de Blasio said. “We’re watching the data really carefully, and we’ll certainly continue to look at different options of what we got to do to respond to the situation as it develops.”

The last time Richard McKee rode the New York City subway, John F. Kennedy was in the White House. Now retired and vaccinated, he flew here in June from Northern California and headed underground with a camera around his neck to photograph the murals and installations in the subway stations.

Things felt different than in 1962, when Mr. McKee was last here. “For one thing,” he said, “the subway is cleaner; it’s quieter.”

Mr. McKee is one of the many tourists I’ve met on the subway this year who is taking advantage of a newly reopened New York. For now, at least, travel and hotel costs are still relatively low, enticing young people, retirees and families to make the trip.

“She hadn’t experienced New York nightlife before,” Mr. Bakar, 26, said. “I’ve been in love with New York for years and I thought it’d be a great place to escape to for her birthday.”

Mr. Bakar noted that the sense of normalcy on the trains felt good, and that the “spirit of the city is back.”

The Ortega family, traveling to New York from Bogotá, Colombia, in June, hit some major landmarks, like the Statue of Liberty and the Empire State Building. They had planned to make the trip since before the pandemic for Sara Sofía Ortega’s quinceañera.

Edgar Ortega, Sara Sofía’s father, who had been to New York before, said they enjoyed riding the subway, which was cleaner and less busy than on his previous visits.

Matthew Gerson made the trip in mid-June from Washington to visit his girlfriend, who was on summer break from law school and was living in the Bedford-Stuyvesant neighborhood of Brooklyn.

“It’s been wonderful to ride the subway in New York,” Mr. Gerson, 25, said. “It’s been a powerful reassurance that life is gradually returning to normal. Like waking up from a long, bad dream.”

I was on my way to my first job, standing at the corner of 52nd Street and Second Avenue and waiting for the light to change.

Suddenly, I felt my body being lifted off the ground by someone much bigger. I could not see who it was, but I did not feel threatened, just confused.

After I regained my balance and composure, I looked up to see that it was an old friend of my father’s.

“You looked like you needed a hug,” he said with a smile.