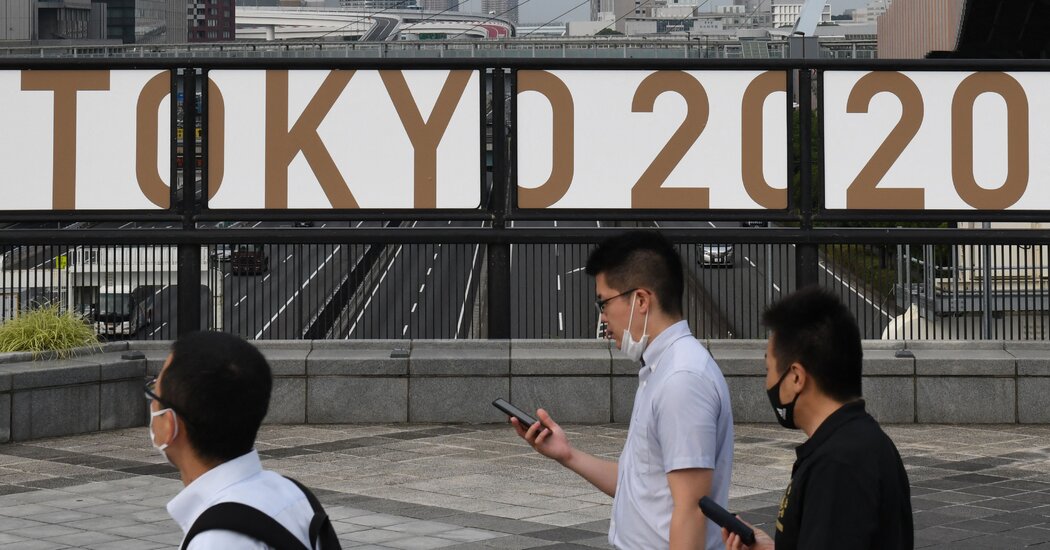 TOKYO — Olympic organizers said on Thursday that they would bar spectators from most events at the Games scheduled to open in two weeks, a decision that followed the declaration of a new state of emergency in Tokyo in response to a sudden spike in coronavirus cases.

Officials have long insisted that they can hold the Tokyo Games safely amid a pandemic. Last month, they announced that they would allow domestic spectators at the events despite public fears that the Games could become a petri dish for new variants of the virus.

Now, the virus has again wreaked havoc on the planning by Olympic organizers, who gathered in an emergency meeting on Thursday night to decide how to respond to the latest challenge of a pandemic that had already delayed the Games by a year.

The announcement came only hours before the Olympic torch was set to begin the last — and long-delayed — leg of its trip through Japan. Officials decided this week that there would be almost no actual running during its two-week perambulation through Tokyo and its suburbs, replacing the marathon with a series of ceremonies that would be closed to the public.

Addressing reporters on Thursday night, Prime Minister Yoshihide Suga acknowledged the challenge the country faced as the more contagious Delta variant had begun to circulate. He warned about the danger of the virus spreading beyond Tokyo as people traveled home for the summer holidays.

But at the same time, Mr. Suga pledged to deliver an Olympic Games that would go down in history not as another victim of the pandemic, but as an example of fortitude in the face of adversity.

Viewers will be tuning in from around the world, he said, and “I want to transmit to them a message from Tokyo about overcoming hardship with effort and wisdom.”

The bar for achieving that goal moved even higher on Wednesday, when Tokyo reported 920 new coronavirus infections, the highest number since May, when the case count briefly rose over 1,000.

The state of emergency announced on Thursday will start on Monday and be in effect for the duration of the Olympics, which begin on July 23. It is the fourth time that Tokyo has been put under a state of emergency since the beginning of the pandemic.

The most recent one began in late April, and most restrictions were lifted by the end of June. Tokyo has since been under a quasi-emergency that was set to be lifted next Sunday.

The impact of Covid-19 on Japan has been relatively mild compared to the effect on the rest of the world — a success that experts attribute to ubiquitous mask wearing, among other things. The death toll, at just over 14,800, is far lower than that of the United States, and Japan has never gone into the kinds of hard lockdowns seen in places like Australia and Singapore.

But Japan’s vaccine rollout — now at more than a million doses a day — got off to a slow start, and the country has struggled with persistent moderate levels of infection.

Tokyo residents have taken each new state of emergency less seriously. Streets that were empty in June 2020 are now full of people going about their lives almost as normal — at least until evening, when bars and restaurants close early.

Still, the Japanese public has expressed widespread opposition as the Olympic organizers have proceeded with planning for the Games. Recent polls show that a large majority of people support canceling or further delaying the Olympics.

With each passing day, the possibility that the Games will be stopped becomes increasingly unlikely, regardless of the state of the virus outbreak in Tokyo. In a sign of the event’s inevitability, the International Olympic Committee president, Thomas Bach, arrived in Tokyo on Thursday. He had canceled a previous trip to Japan, scheduled for the spring, after the city entered a new state of emergency.

Speaking on Thursday night before the Olympic organizers’ meeting, Mr. Bach said that the strict measures taken by Japan to prevent athletes and other participants from spreading the virus “have proven to be successful.”

Moving forward, he said by video from a hotel room where he was quarantining, “we’ll support any measure which is necessary to have a safe and secure Olympic and Paralympic Games for the Japanese people and all the participants.”

Officials have been forced to revise their plans on the fly in response to developments in the virus situation. In March, the organizers announced that foreign spectators would be barred. Then, in late June, as virus cases dropped across the country, officials announced that they planned to allow domestic spectators at events, with as many as 10,000 people able to watch competitions held in larger venues.

Under the plan, event venues would have put in place strict precautions against the spread of the virus and the total number of tickets would have been halved, with a lottery held to determine who could attend. But organizers warned that those plans could change if virus counts increased again.

With the announcement on Thursday, spectators will be barred at all events in Tokyo and its surrounding areas. A few, like the marathon, will be held in locations not affected by the new state of emergency, allowing for the possibility that some fans will be allowed to attend. But organizers announced that spectators would be asked not to cheer the runners on the roads.

The earlier decision to allow spectators had come under attack from experts concerned about the possibility that the Games could become a superspreader event.

Anxieties have been running high as athletes have begun to pour into Japan from around the world. So far, at least four members of Olympic teams have tested positive for the coronavirus and been quarantined.