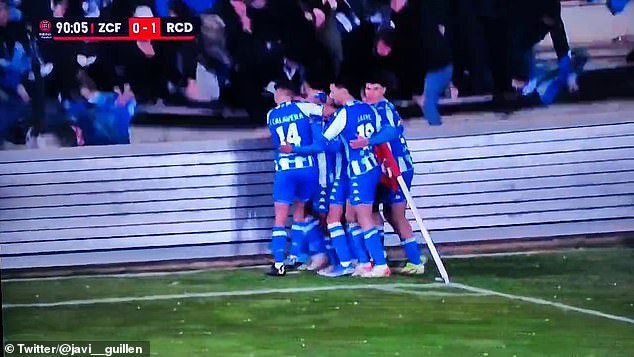 A group of Deportivo La Coruna fans cheated death by celebrating a late goalAlberto Quiles scored a late winner for Deportivo away at Zamora on WednesdayAs the fans celebrated, a barrier at the front of the stand suddenly collapsedTwo rows of fans, which included women and children, were sent tumblingMiraculously, no-one was killed in the incident and five were taken to hospital

By Gerard Couzens for MailOnline

This is the dramatic moment a group of Deportivo La Coruna football fans cheated death when a barrier gave way as they celebrated their team’s last-gasp goal.

TV footage showed two rows of Deportivo supporters – including women and children – plunging to the ground inches from goalscorer Alberto Quiles as teammates rushed over to congratulate him.

But miraculously no-one was killed in the drama, with just five people taken to hospital.

The incident happened in the dying moments of Wednesday night’s league game between third-tier Spanish sides Zamora and Deportivo after the away team went 1-0 up in the 89th minute.

The barrier gave way as excited Deportivo fans jumped up and down in front of the triumphant players who had rushed over to the area of the ground where their supporters were so they could celebrate together.

Paramedics in the ground, in the city of Zamora in western Spain near the country’s border with Portugal, rushed to attend those who had been hurt. 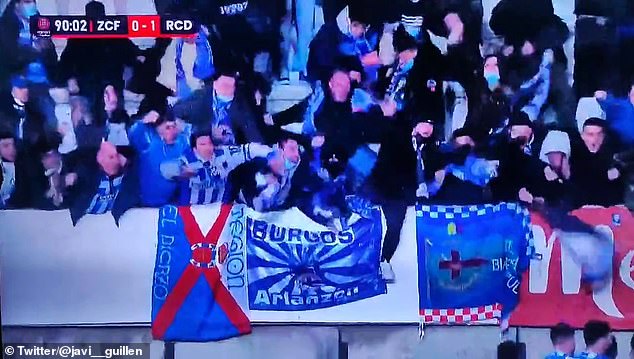 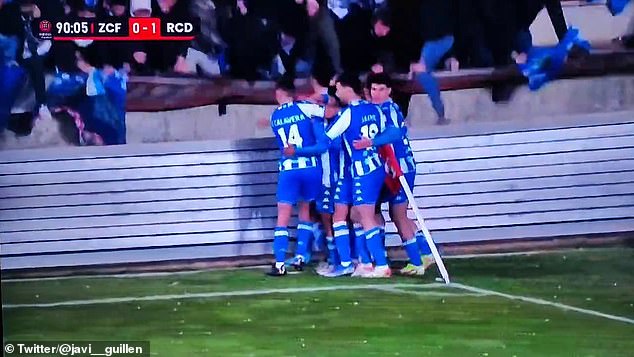 The broken barrier meant two rows of fans, including women and children, were sent tumbling

One of those who fell suffered a broken ankle and another a knee injury but none were reported to be serious.

The game continued after it was confirmed there were no serious casualties, with former top-flight team Deportivo holding on for a valuable three points.

Local fire chief Moncho Trigueros said: ‘With the celebration after the Deportivo goal, the away fans have rushed forward and the barrier gave way with the avalanche of people and several have plunged to the ground. 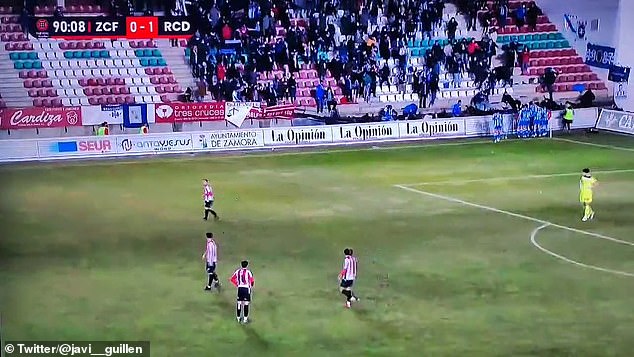 Miraculously, no-one was killed in the incident and just five supporters were taken to hospital 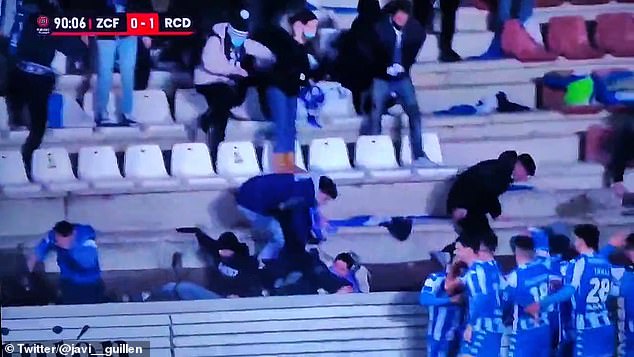 A spokesman for the home side, which is now set to conduct an internal investigation into security, said after the game: ‘Zamora FC regrets the injuries suffered by the Deportivo de la Coruna supporters after the incident involving a barrier at our stadium during the goal celebration.

‘The club would like to thank the Red Cross, Civil Protection workers, and police as well as the club representatives present in the stadium for their quick reaction. We wish a speedy recovery to each and everyone of the people hurt.’

A local police source added: ‘The images speak for themselves. It was a miracle no-one was seriously hurt or worse.’

Similar scenes were witnessed in Holland last October as Vitesse fans caused a section to collapse as they celebrated their side’s victory over NEC. 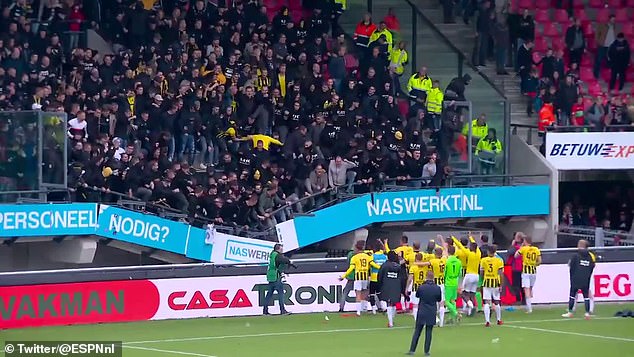 The Arnhem outfit beat NEC 1-0 away, with Nikolai Baden Frederiksen scoring the only goal of the game in the first half. After the final whistle, the Vitesse players went over to celebrate with their travelling supporters at the Stadion Galfort.

However, the joyous scenes briefly came to a halt as their bouncing up and down caused the stand to suddenly give way. Many at the front fell downwards, with the players looking concerned.

Fortunately nobody was injured in the incident despite looking like it could have been nasty. And as soon as that was confirmed the fans got back underway with their celebrations.