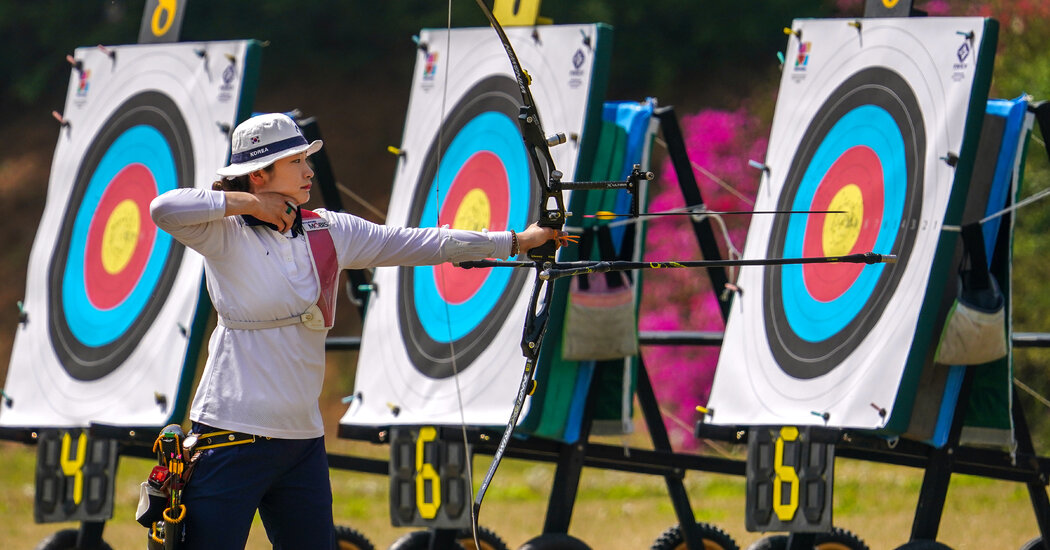 For South Korean archers, winning Olympic gold medals feels almost like a given — they have claimed 23 of the 34 golds awarded in the sport since 1984.

It’s getting to the Games that’s tough.

Just ask Chang Hye-jin, who won two gold medals at the 2016 Olympics in Rio de Janeiro, or Ku Bon-chan, who pulled off the same feat on the men’s side. Neither champion made the cut this year.

Or ask Kim Je-deok, 17, who this spring successfully navigated the crucible of South Korea’s national team selection tournament, which gathers the country’s top 200 archers to vie for six tickets — for three men and three women — to the world’s biggest sporting event, with no regard for rankings or past performance.

“Once-in-a-lifetime luck came to me,” said Kim, who recently overcame a shoulder injury that would have kept him out of the Olympics if they hadn’t been postponed by a year.

The South Korean archers fired thousands of arrows each over several rounds of grueling competition spread out over eight anxious months. For those who made it, the hard part might now be over.

The South Korean archery team has won gold medals at every Summer Olympics since 1984. The women’s team has been particularly dominant, winning gold eight straight times since the team event made its debut in 1988 in Seoul. In 2016, the men’s and women’s teams swept the gold medals in the team and individual events at the Olympics in Rio de Janeiro.

The team is famous in the archery world for the depth and detail of its preparations. National coaches employ wind machines and pump artificial noise (crowd sounds, camera shutters) through speakers to simulate adverse environmental conditions athletes might encounter in competition.

Before the Rio Games in 2016, the archers trained at a live baseball game, an unorthodox way to expose them to a pressure cooker atmosphere. This spring, practice sessions at the national training center in Jincheon have taken place in an arena modeled after the one they’ll see in Tokyo. Staff members installed video screens, audience stands and banners where they are likely to be positioned at the Olympics. Simulated loudspeaker announcements in English and Japanese further set the mood.

“Our goal is zero-defect training,” said Jang Young-sool, the vice president of the Korea Archery Association.

South Korean archers start young, and those who make it through the rigorous development pipeline have their careers supported by one of the dozens of teams affiliated with national corporations and universities. Kim, who is still in high school, first tried archery in the third grade. By fifth grade he was dreaming of competing on the international stage.

“A talent like Je-deok comes once in a hundred years,” Yun Ok-hee, who won an individual gold medal at the 2008 Games in Beijing, told Arirang News this year, speaking about Kim Je-deok.

Four of South Korea’s six archers will be making their Olympic debuts, including Kang Chae-young, the No. 1 woman in the world, who failed to qualify for the Rio Games in 2016 after falling out of a spot on the last day of qualifying.

Kim faced a similarly tense situation on the last day of competition at the trials this year, needing to hit three 10s with his final three arrows to slip into a top three spot. He gathered himself, visualizing a practice session where he’d hit three 10s, and then did just that, clinching a spot on the team with the 2,952nd and final arrow he shot in competition.

He said he felt stressed and nervous all through the trials. But the feeling was different now. “I’m more comfortable now,” Kim said, “because I believe in myself.”