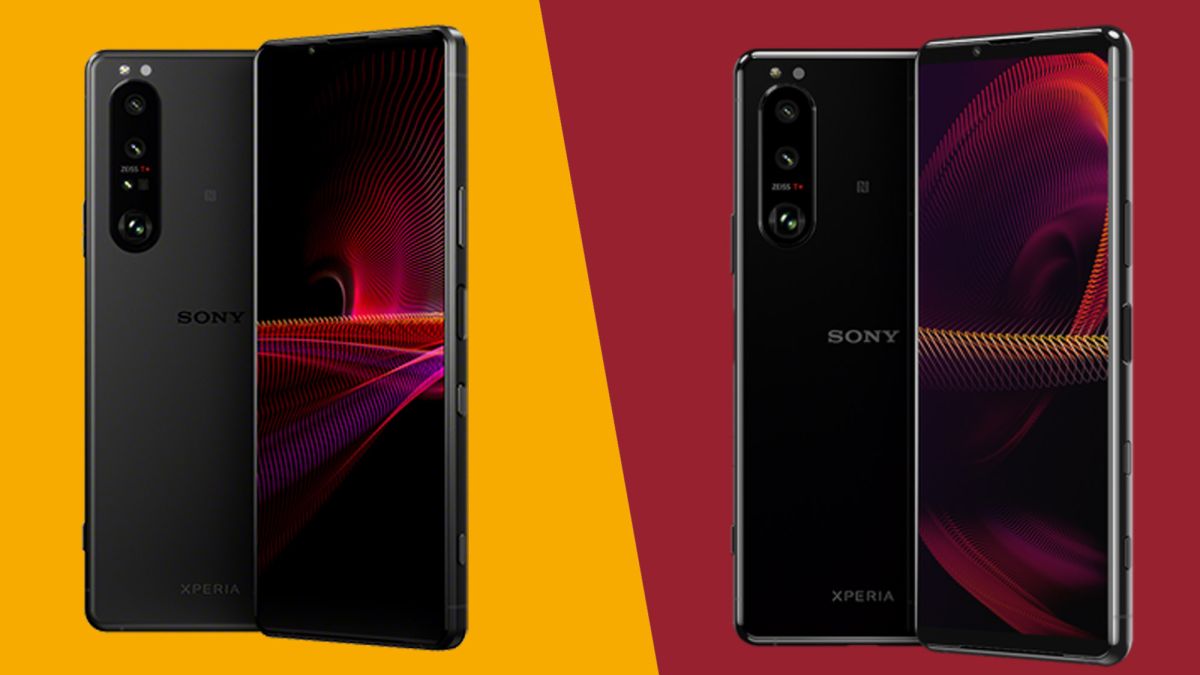 When it comes to building flagship smartphones, Sony does things a little differently to the other major brands, drawing on its peerless expertise in various fields to create something for the true enthusiast. You won’t find another phone with quite the same characteristics as these two titans.

So let’s turn the comparison inwards. How much has Sony been able to improve its premium smartphone formula in 12 months?

We’ve taken exception to the pricing of both phones in our respective reviews, but at least the Xperia 1 II has held its price well. At the time of writing, Amazon US was selling the Sony Xperia 1 II for $1,148, while Amazon UK sold it for £1,075. Expect that to drop further over the coming months.

Both phones are unusually flat and angular, with the kind of perfectly flat display that’s only just showing signs of coming back into fashion. They completely omit the modern scourge of the display notch, too, with slim foreheads just about containing the obligatory selfie camera.

That’s not to say that the two phones are identical. We prefer the look and feel of the Sony Xperia 1 III, chiefly thanks to its new frosted glass rear panel. It’s much more appealing (not to mention smudge-resistant) than the Xperia 1 II’s shiny finish.

That would certainly account for the increase in weight, too, from 181g to 186g. The mmWave variant of the Xperia 1 III adds an extra gram and a bit onto that as well.

The sheer tallness of both phones, courtesy of a 21:9 screen aspect ratio, means that neither is very easy to wield in one hand. You can reach the opposite side just fine with your hand, but good luck getting much further than half way up the display.

The right hand edge of the Sony Xperia 1 III is one of the busiest we’ve ever seen in a smartphone. Alongside the volume rocker and power button (expanded to incorporate a fast and reliable fingerprint sensor) there’s a dedicated two-stage shutter button, just like the Xperia 1 II. But unique to the Xperia 1 III is the addition of a dedicated Google Assistant button, which feels somewhat superfluous.

Both phones feature 3.5mm headphone jacks, which is pretty darned extraordinary in a mainstream flagship phone. Rounding out a phenomenal audio provision, both phones also have front-firing stereo speakers, though the Xperia 1 III’s are 30% louder.

If Sony’s design work is lovably unique, you could say the same for its displays. Both of these screens are 6.5-inches big, with an unusually tall 21:9 aspect ratio.

This makes widescreen movie content sing, especially with the complete lack of any bothersome notches or distractive screen curves.

Both phones are also capable of a headline grabbing 4K resolution output, or 1644 x 3840 to be precise. That’s as sharp as you’ll find on a modern smartphone.

Not every application and task will take advantage of this 4K resolution, and the difference isn’t as noticeable as FHD to QHD, let alone HD to FHD. But load up a 4K 21:9 video on YouTube, and you’ll be suitably impressed.

The Sony Xperia 1 III adds one major thing to the package – the potential for a 120Hz refresh rate.

Sony hasn’t changed its camera system up all that much from the Xperia 1 II to the Xperia 1 III. The main 12MP 1/1.7″ wide sensor appears to be identical, with the same f/1.7 aperture, 24mm focal length, 1.8µm pixel size, Dual Pixel PDAF and OIS.

This shared lead camera doesn’t take the absolute best snaps on the market, but it’s certainly competitive with the leading pack. Colors can seem muted, but that’s largely an artistic choice from Sony to be as true to life as possible, with minimal image processing enhancements compared to rivals.

Sony’s autofocus system, in particular, is just about the fastest and smartest we’ve used in a phone. It’ll even lock onto pets.

The 12MP 1/2.6″ ultra-wide sensor also seems to be shared between the two phones, complete with the same f/2.2 aperture, 124˚ viewing angle, and Dual Pixel PDAF. The 0.3 MP TOF 3D depth sensor is also present on both phones.

Video capture is similarly comprehensive across both phones, though the Xperia 1 III can stretch to 4K at 120fps. The Xperia 1 II is stuck at 4K/60fps, so you can’t get the same super-sharp slow mo footage.

While the Xperia 1 III sticks with 12GB of RAM regardless of the model, the Xperia 1 II only offered such a provision a little further down the line with a couple of regional limited editions. The global model only packed 8GB.

You’ll probably struggle to tell the difference in use. Both phones feel plenty fast, and the key difference in terms of feel will come about from the 120Hz display of the Xperia 1 III.

The usual round of high-end games (Genshin Impact, PUBG, Fortnite, League of Legends: Wild Rift etc) will run equally well on both too. It’s not that the Snapdragon 888’s GPU component isn’t faster, it’s that there’s no game (yet) that really takes full advantage of that extra head room.

Still, the newer phone clearly has a greater degree of future-proofing, and will feel faster for longer. It also features a 512GB storage option on top of the 256GB base model, while that’s as far as the Xperia 1 II goes. Both have microSDXC slots for expansion purposes, which is something of a rarity in flagship phones.

Both phones also feature 5G connectivity, although only the Sony Xperia 1 III offers a fully compatible mmWave 5G model for the US market.

While the Xperia 1 II packs a 4000mAh battery, the Xperia 1 III goes with a 4500mAh cell. That’s around a 12% increase which, combined with a more efficient Snapdragon 888 chip, should lead to a noticeable stamina increase.

Sure enough, we found that we were able to make the phone last at least an hour longer with the new phone than during our testing time with the Xperia 1 II.

We found that the Xperia 1 III would have plenty of charge left at the end of a full working day, and we always had around 10% or so left at around 11pm.

Sony has also bolstered its fast-charging provision with the new phone. You now get a 30W charger in the box (take that Samsung) rather than the 18W unit supplied with the Xperia 1 II. It supports up to 21W though, which should see it more or less matching the Xperia 1 III’s 0 to 50% in 30 minutes given the difference in battery capacity.

It’s no surprise to learn that the Sony Xperia 1 III is a similar yet slightly better phone than its immediate predecessor.

Its design and build quality are very similar to the Xperia 1 II, as well as its core feature set. But the newer phone is a notch faster, has slightly better stamina, and it adds a 120Hz refresh rate option to that already stellar 4K OLED display.

The two camera systems are similarly balanced and rapid, but the Xperia 1 III adds a novel variable telephoto lens for superior zoomed shots, as well as offering the potential of 4K slo mo videos.

In practical terms, however, there’s little to call between these two phones. They’re both very expensive, so if you see the Xperia 1 II heavily discounted over the coming months, it could prove to be the better buy. Otherwise, money no object, the Xperia 1 III is one of the best phones on the market.