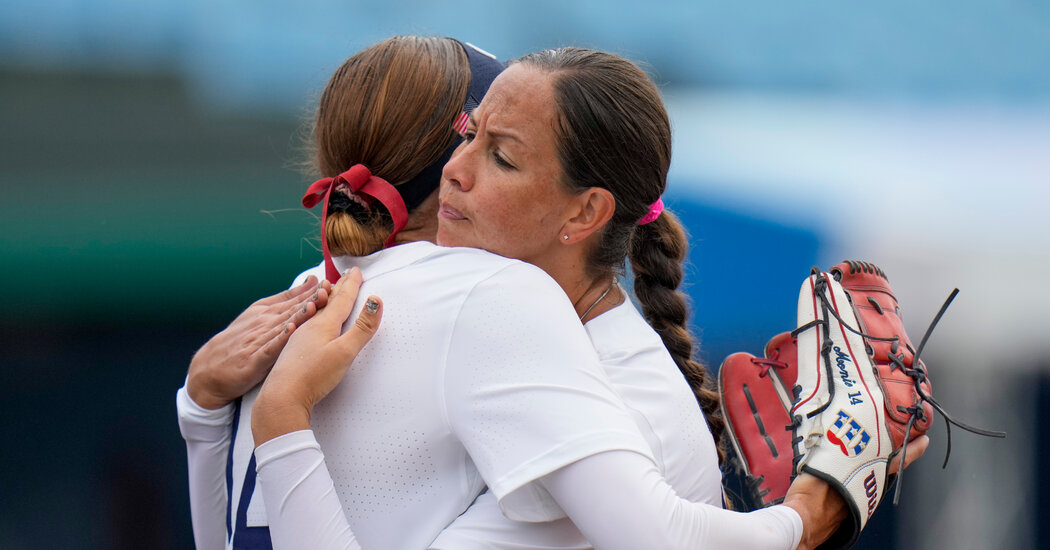 TOKYO — During the 2008 Olympics, Kaleigh Rafter was 21 and representing Canada even though she had not yet finished her college softball career. Still, she thought she probably wouldn’t have a chance to play in the Olympics much longer, because her sport had been voted out from the permanent program.

“I remember telling my roommate like, ‘I won’t be a 34-year-old on this team ever,’” Rafter, a catcher, recently recalled. “‘That’s not going to be me. I’m going to be out of the sport by then.’

“And then sure enough, here I am.”

Not only is Rafter back for the Olympics, but so are her Canadian teammates Lauren Regula, Jenn Salling and Danielle Lawrie. Yukiko Ueno, Eri Yamada and Yukiyo Mine from Japan are, too. And then there’s Cat Osterman and Monica Abbott of the United States, as well as Australia’s Stacey Porter. All 10 players are participating at this tournament more than a decade after they played in the 2008 Games.

“It’s a bit nuts that there’s 10, and really cool,” said Porter, 39, an infielder and the captain of Australia’s team.

For many Olympians, participating in the Games is the achievement of a lifetime. For the very best, an Olympic career can span two, three or even — in the case of the ageless Brazilian soccer player Formiga — seven appearances in the Games. But it is far more rare for those multiple trips to come a generation apart.

Life can move on. And for many of the softball players, it did. They went to school, they played professionally, they worked as coaches, they started businesses, they got married, they had children, they contended with injuries and other challenges and several retired.

But the 10 veterans of 2008 who are back this summer also kept playing for their national teams. That has made their return a testament to their talent and their dedication to a sport that was once unwanted by the Olympics.

Softball would not have been in this position if not for a tight vote by the International Olympic Committee in 2005 that cut the sport from the program for the 2012 London Games. The criticisms at the time were that softball — and its Olympic male equivalent of baseball — weren’t global enough.

When word of the I.O.C.’s vote reached Osterman, she called it “a blindsided sucker punch.”

“I thought 2008 was going to be it for me,” said Regula, now 39. “And I remember thinking that this was going to be a huge blow for softball. There’s so many softball players out there that are never — at the time, it felt like never since we didn’t know if it was going to come back — going to be able to have the opportunities that we had.”

Most of all, Regula worried that young girls would no longer aspire to play softball or dream of the Olympics.

Two years after Ueno, Japan’s ace, led her country to an upset of the United States for the gold medal in 2008, Osterman and Abbott, two of the most decorated pitchers in the world, stepped away from the U.S. national team. With no Olympics in sight, they focused on their professional careers. Both played in the United States and Abbott also played in Japan, and both supplemented their incomes with college coaching, clinics or motivational speaking.

In 2015, still uncertain when Olympic softball would be back, Osterman stepped away entirely from pitching. She was, she said, ready to “settle down, get married and have a life.”

Regula and Lawrie also retired after the 2008 Olympics for family reasons. Lawrie, now 34, left Team Canada in 2012 and professional softball in 2014 so she could give birth to her daughter. She said she was “really happy” with being retired, and if not for Salling and Rafter, two mainstays in the Canadian program, she wouldn’t have sacrificed time away from her family to rejoin them in 2018.

Regula retired after the Beijing Olympics because she had gotten married the year before, wanted to start her family (beginning in 2009, she had three children in three years) and soon owned a gym with her husband. She didn’t pick up a ball again until 2016, when she represented Canada in the Women’s Softball World Championship.

Even though she knew Olympic softball was back in 2020, Regula was busy juggling her family and business and retired again. The itch returned in 2019 when she was working as a broadcaster and was working the tournament during which Canada qualified for the Tokyo Games.

She was back on the mound the next year and named to the roster in May, a comeback sparked by watching her teammates play even as they got older. “Not even a thought then that I would ever be in this position right now,” she said.

From Japan’s team, Mine retired briefly in 2015 but returned when softball’s Olympic return was announced the next year. (Mine, Ueno and Yamada were not available for interviews ahead of the Olympics because they were busy preparing, a team official said.)

Over the years, Osterman said she and Abbott, 35, didn’t necessarily miss the Olympics because they were playing at a high level professionally. She did feel bitterness in 2012 over the exclusion. Abbott said it was hard to watch the Olympics after they dropped softball, and that it felt the efforts to get it reinstated were endless.

“There was definitely a kind of disappointment when the Olympics would happen, and people would be excited, and you didn’t get to go,” she said. “Not necessarily for me, but just that softball wasn’t there. We didn’t have that opportunity.”

After the 2008 Olympics, the Women’s Softball World Cup moved from every four years to two years. Coupled with the Pan American Games and other international competitions, the events helped satisfy only some of the players’ competitive urges.

“It kind of tastes like an Oreo when you know it’s not the real Oreo,” Rafter said of those other tournaments. “Nothing will ever be the Olympics. The Olympic medal is way different than a world championship medal, even though that became what we were playing for.”

Even after softball’s return for the Tokyo Games was confirmed, Osterman didn’t jump at the opportunity to return. She said she was content being retired but her former U.S. softball teammates Kelly Kretschman and Abbott kept pestering her to reconsider.

While players like Lawrie had serious doubts about sticking with the Olympics after the coronavirus pandemic forced a postponement of the 2020 Games, Osterman did not. She had done so much to reach this point — including coming out of retirement and resigning her position as an assistant coach at Texas State University to focus on training.

“There was no part of me that wanted to turn back,” she said.

During softball’s Olympic hiatus, many of the players said the quality of international play improved as more players developed in the American college and professional ranks. The U.S. and Japan, though, remain as the world powerhouses.

But the return for this Games, though, feels bittersweet. Softball will not be in the 2024 Games in Paris, because baseball and softball are not popular in France. Both sports, however, are widely expected to return in 2028 in Los Angeles.

Osterman and Abbott both said that if they were at the Olympics then, it would be perhaps as coaches, not players.

Asked in a recent video chat if they would carry on until then, the four veterans of Team Canada burst into laughter. What’s seven years after already waiting 13?“I don’t know if I can rationalize putting off life until 41,” Rafter said.