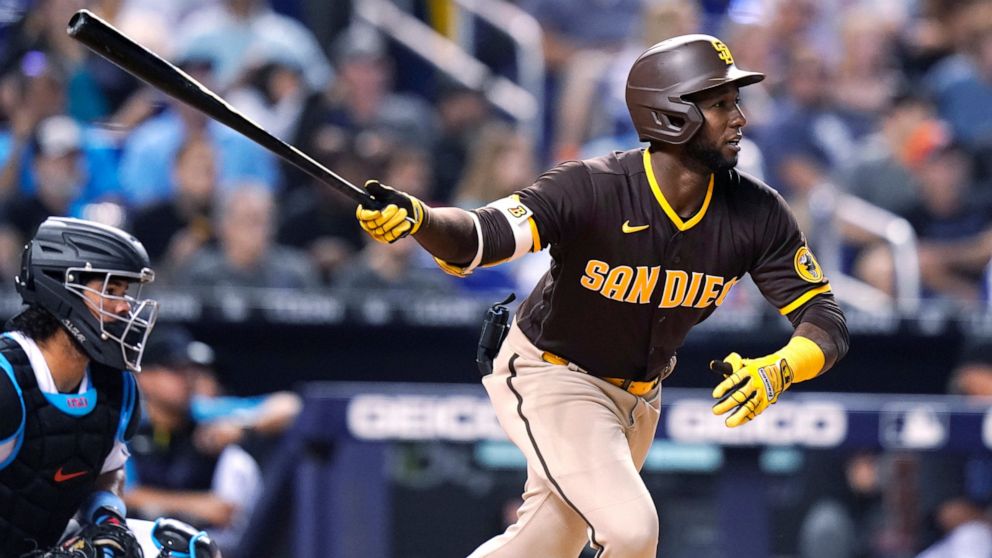 The Padres left-hander scattered three hits, struck out eight and walked three in his longest outing since June 4, when he pitched seven scoreless innings against the New York Mets. Snell (4-3) had not gone past four innings in his two previous starts. He was lifted after allowing a leadoff double in the seventh inning to pinch-hitter Isan Díaz.

“The first inning was really frustrating because I felt good and I was nowhere near the zone,” Snell said. “I finally got into a rhythm and started attacking the zone. The fastball-slider was a good mix today.”

Fernando Tatís Jr. struck out three times and was hitless in four at-bats. He walked in the fifth, stole his NL-leading 23rd base and eventually scored on Manny Machado’s sacrifice fly.

Austin Adams relieved Snell with a 3-0 lead and hit Jon Berti with a slider that bounced off the back of his head. An attentive Berti stayed on the ground while treated by Marlins training staff before leaving the game. He was replaced by pinch-runner John Curtiss.

Berti was diagnosed with a concussion and also sustained a laceration which required three stitches.

“It’s great to see him get up and walk but the news is not great,” Miami manager Don Mattingly said.

“He just didn’t have the command on the slider that has been so good for us,” San Diego manager Jayce Tingler said of Adams. “It was nice to see everyone pick everybody up tonight.”

Mark Melancon pitched a perfect ninth for his major-league best 29th save in 33 chances.

“We were hoping for that breakthrough and we finally got it,” Mattingly said “We weren’t able to scratch more after that.”

San Diego scored early on Profar’s RBI fielder’s choice in the second. Profar drove in Eric Hosmer, who walked and advanced two bases on a passed ball and wild pitch.

The Marlins unsuccessfully challenged that the relay throw from shortstop Rojas to first beat Profar for an inning-ending double play.

Profar increased the Padres’ lead in the fourth with his run-scoring single against Miami reliever Jordan Holloway (2-3).

Snell allowed Jorge Alfaro’s leadoff double and walked Berti in the second before striking out Lewis Brinson and retiring Panik on a double play. Brinson hit a one-out double in the fifth, but Snell retired Panik on a groundout and Sandy León on a fly to right.

“I’m pretty honest with myself,” Snell said. “I have to continue to get better, continue to stay in the zone and make them swing.”

The Marlins were 1 for 10 with runners in scoring position. The Padres were 2 for 13.

“We didn’t execute as we needed with runners in scoring position,” Tingler said. “We knew coming in with the Marlins situation it was going to be a bullpen day and sometimes those could be a little bit challenging.”

Rookie reliever Anthony Bender made his first major league start in the bullpen game for Miami. Bender pitched a scoreless first around a hit by pitch and struck out one.

The Marlins played their first home game in the aftermath of the pro-democracy protests in Cuba on July 11, and the club used the occasion to support the demonstrators. Behind the pitching rubber was the inscription “Patria y Vida” (Motherland and Life), the slogan which has become the rallying cry for those seeking an end to the 62-year dictatorship in the island nation. Between the top and bottom of the third inning, a music video was played featuring Cuban hip hop performers critical of the government. Miami is home to the largest Cuban-American community in the United States.

The Marlins optioned RHP Nick Neidert to Triple-A Jacksonville and recalled Holloway from the same club. Neidert started at Washington on Wednesday and allowed one run and three hits in five innings.

LHP Ryan Weathers (right ankle inflammation) is listed as the starter for Saturday. Weathers was placed on the injured list since July 13. … RHP Matt Strahm (knee) will pitch in a rehab game Friday at Triple-A El Paso. Strahm underwent patella tendon surgery last October and has yet to appear in a game this season.

Marlins: IF Jazz Chisholm (left shoulder contusion) took groundballs Thursday. There is no timetable on his return, although Chisholm said Thursday he is targeting rehab games early next week.