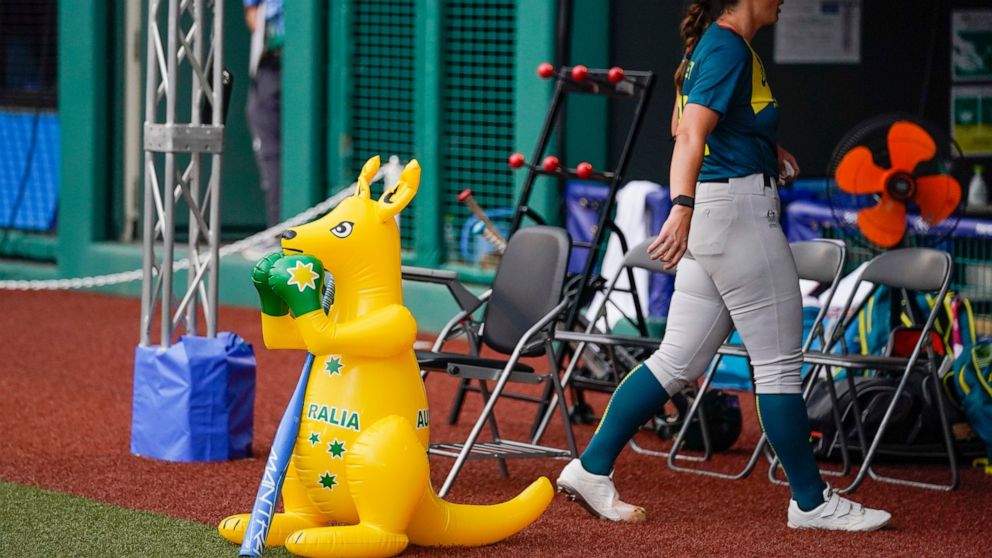 FUKUSHIMA, Japan — Skippy is getting an up-close view of the Olympics that fans aren’t getting to see.

A 3-foot tall yellow inflatable kangaroo with green paws has been a fixture at Australia’s softball games. He has a seat in the dugout and even accompanied coach Laing Harrow, pitcher Kaia Parnaby and left fielder Jade Wall to the postgame news conference after Thursday’s 1-0 victory over Italy.

“He loves to entertain, loves coming to the games. Everywhere we go he seems to be a fan favorite with the locals and it puts a smile on their face,” Wall said. “We want to bring entertainment on the field, and he’s got the enterainment off the field for us.”

Skippy is clean and shiny. He is not the original from 2009.

“I guess it’s a part of home for us. It’s a part of our coat of arms and it kind of puts a smile on our face, as well,” Wall said. “It can be quite a serious game, and you have a look at Skip, and you go, OK, now you’ve put a bit of a smile and get back out there.”

Wall said Skippy enjoyed his stay in Fukushima, with its woods and mountains in the background. The softball tournament’s first two days were at a ballpark about 150 miles north of Tokyo and will shift Saturday to Yokohama, near the capital.

“He feels quite at home here rather than the city of Tokyo,” Wall said.

Australia’s Commonweath Coat of Arms has a shield with symbols of the nation’s six states held up by a kangaroo and an emu.

“Skippy the Bush Kangaroo” was an Australian television series that aired from 1968-70 about a young boy and his brainy pet, and it was followed by the movie “Skippy and The Intruders.”

“They’re very special back home for us as Australians,” Wall said, “so to bring him on all of those trips, I know he gets a buzz out of it. We love him.”