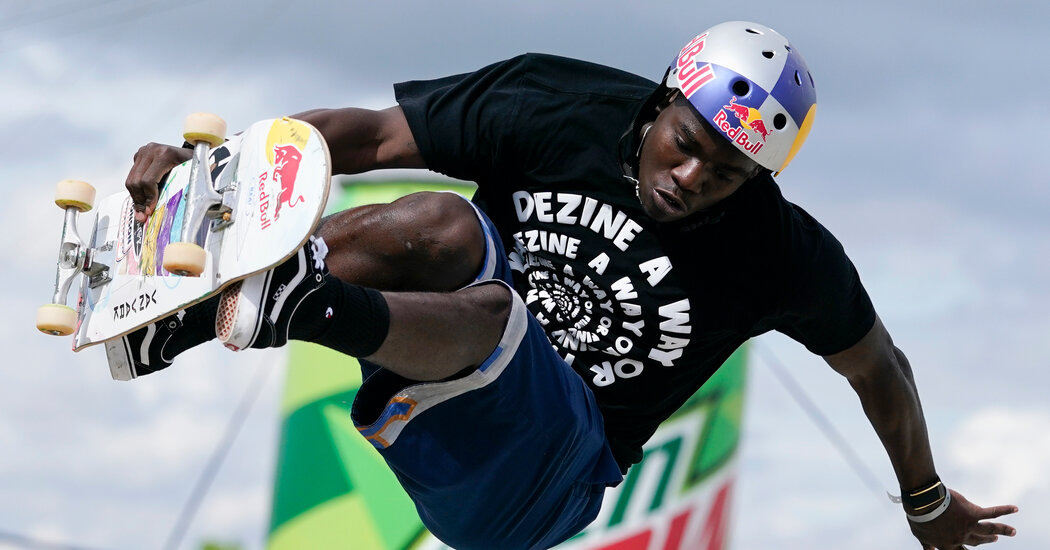 For the past three and a half years, Zion Wright, an Olympic-bound skateboarder, has been very serious about his training.

He eats right. He does strength training, cardio and physical therapy. Post-skate, he focuses on recovery: foam rolling, stretching, rehabbing. It’s befitting of an Olympic athlete. But the fact that he’s so open about his routine signifies a recent, radical shift in skateboarding — an activity that previous generations refused to even call a sport.

Skateboard training largely involves preparing the body for full-impact slams that can result in long spells off the skateboard. The carnage from what amounts to sprinting off a set of 10 stairs most often includes ankle sprains, fractures and “hot pockets,” where the toe compresses toward the shin. There are also heel bruises, knee sprains and ligament tears; hip and groin problems; and sprains and fractures to the wrists and shoulders from falling.

Everything Wright, 22, does off his board is to ensure he can get back on it as quickly as possible.

“Skating’s a rough thing,” Wright said. “We skate on asphalt, not on water. It’s going to come with some wear and tear.”

Messages promoting wellness feel inescapable these days, and it’s even slowly touching skateboarding — perhaps one the last sports to embrace otherwise ubiquitous practices of training, physical therapy and diet. But the larger health zeitgeist — or any zeitgeist, really — was never going to find a smooth road in skateboarding: Nihilism and going against the grain have long been part of its DNA.

“It was an insult to call skateboarding a sport because we didn’t want to be seen as jocks or anyone who had any type of authority figure over us,” Brandon Turner, a 39-year-old former youth prodigy, said of skateboarding’s tradition. “The whole point of skateboarding was that the power came from within, and it was up to you and your abilities.”

Working out was once verboten, because doing what archetypical jocks were doing was inherently understood as a betrayal of the skateboarding lifestyle. And for years, notions of wellness didn’t align with the skateboard industry’s glorification of alcohol and drug use.

Turner got sober several years ago, and became a Pilates instructor and a mentor for those recovering from addiction. He is enjoying an impressive late-career renaissance.

“You had to be almost secretive about doing things,” said Corey Duffel, a 37-year-old professional skater who has an exhaustive list of career injuries. When he was younger, he’d carefully choose his hotel roommate on team trips — one who knew Duffel was discreetly fond of stretching and doing push-ups or situps. When his teammates would be out drinking, he’d sneak in workouts at the hotel gym.

But all of that has been gradually changing. The younger generation is earnestly embracing wellness, and prominent legends in their 30s and 40s have gotten sober and embraced healthful lifestyles to keep skating at a high level.

“Back when I was growing up, skaters had a four- to five-year window where they could get away with not taking care of themselves and still skate at a really high level, but they end up deteriorating over time because of their body, or booze and cigarettes,” said Dr. Kyle Brown, a physical therapist and sponsored skateboarder.

For years, the old regimen was to smoke and drink your way through an injury while on the sofa, or on crutches while out partying. Now, Brown constantly gets inquiries from professional skaters, many of whom are seeking out physical therapy for the first time.

At 46, Chico Brenes has become a sort of elder statesman of skateboard style with his popular Instagram account. Following his second knee surgery several years ago, he quit drinking and took up surfing, yoga and now strength training. “I can still do the same tricks I could do in my 20s, and it’s all because I’m taking care of myself and my body,” he said. “I wish I would have done this a lot earlier.”

The younger generations are listening.

Jamie Foy, a past winner of Thrasher Magazine’s Skater of the Year — skateboarding’s only award that commands universal respect — began taking physical therapy seriously after many conversations with older skaters.

“They’ve shown there’s a better way to go about things, and if you truly love skateboarding and you want to do it for as long as possible, you should take in all stories from our elders and all the older skaters that you look up to,” Foy, 25, said.

It’s far from a complete transformation, though. Even with skateboarding’s Olympic debut this summer in Tokyo and its likely mainstreaming, hedonism remains popular.

“I go on skate trips, and there’s no early-morning wake-up where everybody’s doing jumping jacks,” said Ewan Bowman, a senior videographer for Thrasher. “It’s early-morning joint rolling and booze consumption before the engine even starts in the van.”

It’s still hard to imagine the local legend hitting the gym regularly, or dutifully doing physical therapy exercises before heading to the skate park. And seeing someone who doesn’t fit the look of an athlete skillfully throw themselves across the abyss of a perilous urban landscape has always been part of the magic and allure of skateboarding.

But Wright, who seems to be reaping an Olympic-size reward from wellness, said the trend was here to stay.

“If someone wants to continue to shred and they have this opportunity to get strong again, I think they’re going to pull up to the gym,” he said.

“For me it doesn’t matter, skater or not. Getting injured and knowing there’s actually a way to recover — why not, you know? You only live once.”