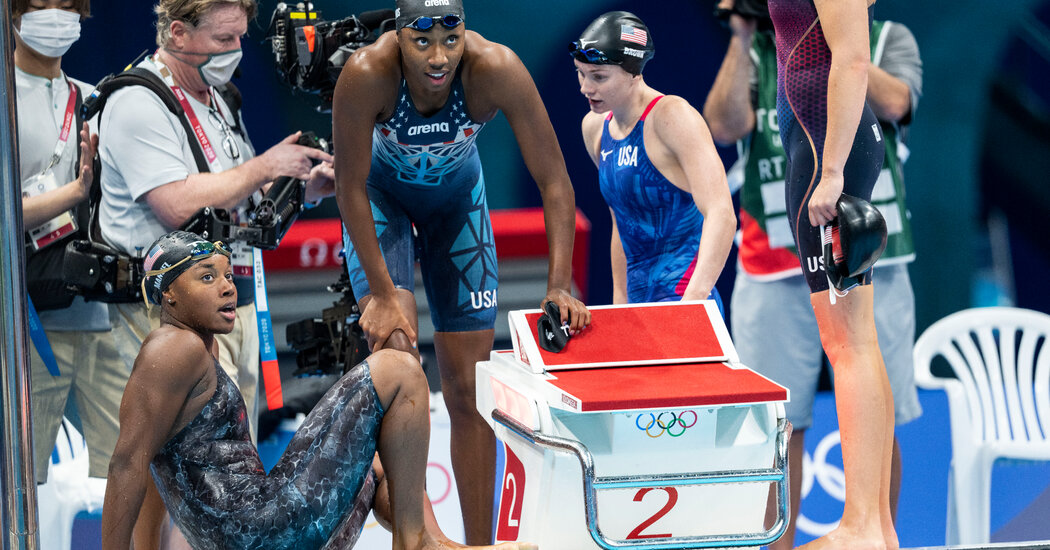 TOKYO — The United States, with Simone Manuel swimming the anchor leg, won the bronze medal in the women’s 4×100-meter freestyle relay on Sunday.

Manuel was making her first appearance at the Tokyo Games, and much earlier than some had expected. She did not swim in the semifinal on Saturday and will not swim again until the individual 50-meter freestyle this weekend.

Questions had swirled about whether Manuel would swim in the event at all after she failed to qualify in her signature event, the individual 100-meter freestyle, at the U.S. selection meet in June.

Her stunned expression after winning gold in the individual event at the 2016 Summer Olympics in Rio remains a lasting image from those Games. With that victory, Manuel became the first Black woman to win an individual Olympic swimming medal.

Her failing to qualify in the individual event for Tokyo was a shock, given that Manuel is the American record-holder in the event. Afterward, she revealed that she had been diagnosed with overtraining syndrome earlier in the year. Along with extreme fatigue, she had been experiencing depression and insomnia and had been required to step back from her normal, intense training routine.

Earlier on Sunday, Chase Kalisz, 27, of Bel Air, Md., won the first gold medal of the Games for the United States in the men’s 400-meter individual medley, pulling away from the pack just after the halfway mark and cruising to a 4:09.42 finish. As Kalisz, who won silver in the event in 2016, exited the pool, he sprawled onto his back and held his head in his hands for several seconds.

Jay Litherland, 25, an American swimmer born in Osaka, Japan, won silver, giving the Americans their first top-two finish in the event since Michael Phelps and Erik Vendt did so in 2004 in Athens.

Ahmed Hafnaoui, 18, of Tunisia, was the surprise winner of the men’s 400 free with a time of 3:43.36. Yui Ohashi of Japan sobbed after winning gold in the women’s 400-meter individual medley.