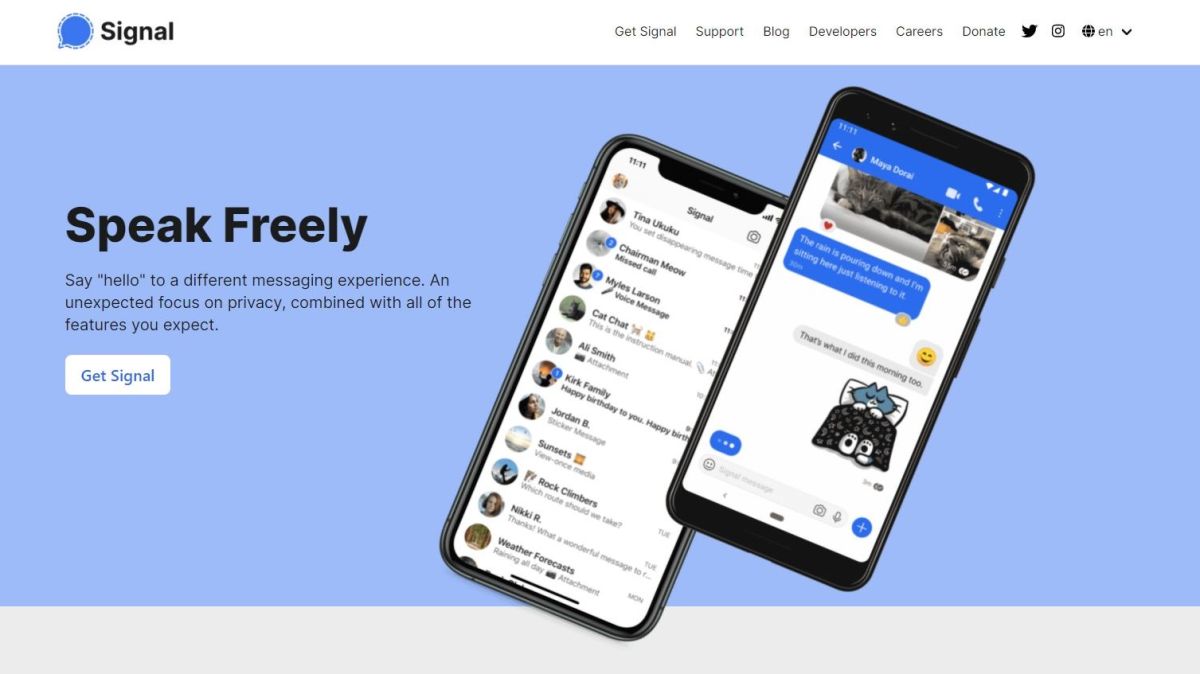 Many popular free-to-use messaging apps make money by collecting, utilizing, or selling user data. If you are concerned about privacy, security, and protection of data rights, then Signal makes for a useful alternative messaging app.

It promises robust end-to-end (E2E) encryption backed by peer-reviewed, open-source code that delivers an ad-free and tracker-free experience. In this Signal review, we will discuss the app’s main features, interface, and usability, and compare it to other popular messaging apps.

Signal is entirely free and available on both Android and iOS. Because The Signal Foundation is an independent non-profit organization supported by donations and grants, it is not beholden to corporate or government control. Signal users can donate to support the tech if they wish. However, there are no subscription plans, no ads, and no paywalls to unlock the full features of the app.

Although it has fewer bells and whistles than the more popular (and less secure) messaging apps, Signal is now adding more fun and expressive features like customizable stickers, wallpapers, chat colors, and themes.

Notably absent is the ability to create stories or reels, video chat backgrounds, and filters. It’s clear the developers of Signal value a minimalist and secure experience over frivolous features that may not appeal to its privacy-conscious user base.

Other than basic text messaging and media sharing, Signal supports voice and video calls. Setting up group calls with friends, family, or coworkers is easy with Signal’s intuitive interface, and a mobile data plan or Wi-Fi is all you need.

Another convenient feature of Signal is the ability to manually mark messages as read or unread. By highlighting a message, you can flag it as unread even after you’ve seen it or vice versa.

One of the main ways that Signal is different from the more mainstream messaging apps is its use of a personal PIN. Signal’s FAQ document states that “the PIN can be used to recover your profile, settings, contacts, and who you’ve blocked if you ever lose or switch devices.” It also works by adding an extra layer of security as you are periodically prompted to enter the PIN to access the app.

Not only can you send messages that automatically disappear, but you can also set a custom timer according to how long you want the message to be available to the receiver. Disappearing messages can be easily identified with a countdown timer that appears at the bottom of the message bubble. When the time expires, the message is deleted.

Of course, if the receiver really wants to save the message, they can take a screenshot before it expires. So disappearing messages should not be used against an adversarial party.

Signal’s group messaging feature is built to be non-intrusive. We’ve all experienced being automatically added to a messaging app group without our consent. Usually, it’s for promotional purposes, and sometimes it’s by an annoying friend or family member.

On Signal, you cannot be added to a group without your express approval. This is to be expected from an app whose main focus is on privacy.

Clean, modern, and minimal, Signal’s interface is intuitive and easy to understand. This aesthetic simplicity means that its primary purpose as a secure messaging environment always remains front and center. However, with the developers releasing new themes, colors, and customization options, Signal’s interface is set to become more appealing to the casual user.

Signal provides extensive documentation on its support page. Along with an FAQ list, there are troubleshooting articles and general support resources. If your question is not listed, you can contact the support team using a link on the website or through the Signal app interface.

We contacted Signal support with a question about our contact list. They responded within two business days with a detailed and helpful answer that quickly solved the problem.

Security is what Signal is all about. From asking to enter your PIN every time you open the app to encrypting your stickers and emojis, it’s clear that Signal takes user privacy seriously.

You can even turn on the incognito keyboard mode, which ensures that your keyboard does not learn from your typing style and commonly used words don’t get added to your personal dictionary. But, of course, the downside is more susceptibility to typos as autocorrection may not be functional.

Signal’s primary security feature is its all-encompassing end-to-end encryption technology. E2E encryption means that no one, not even the app developers, can read your messages or view your photos or other media.

WhatsApp has an existing user base that far surpasses any other messaging app. But constant privacy policy updates, government lawsuits to divulge user data, and the association with its parent company, Facebook, leave users suspicious about its commitment to privacy.

Another popular messaging app, Telegram, has every feature imaginable, including Telegram Channels that allow anyone to broadcast messages to an unlimited audience. Currently, Telegram has two levels of chat functionality: Cloud Chats and Secret Chats.

Telegram Cloud Chats are not end-to-end encrypted and, along with their decryption keys, are stored in numerous cloud data centers worldwide. As a result, multiple court orders from various jurisdictions are needed to access them.

On the other hand, Secret Chats are device-specific and end-to-end encrypted, creating a secure environment between the sender and receiver. However, a Secret Chat must be toggled on by the user as Cloud Chats remain the default chat option on Telegram.

Signal delivers a secure messaging experience with plenty of features to rival its more corporate competitors while keeping true to its core promise—uncompromising privacy and security.

It’s worth noting, however, that there have been reports of undelivered messages and other technical difficulties. These problems will likely diminish as developers iron out the bugs and continue to add servers to keep up with Signal’s burgeoning user base.

In the era of big data, when every app is trying to collect and store user information, Signal is a non-exploitative alternative. And when it comes to encrypted messaging apps, Signal is the gold standard.