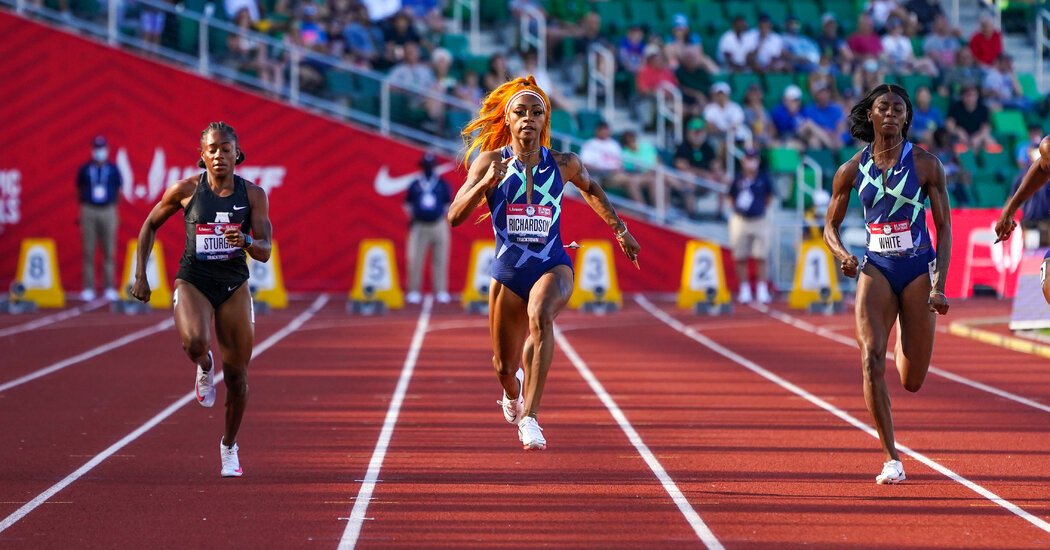 Sha’Carri Richardson, the American sprinter who lost her spot in the women’s 100 meters at the Olympics because she used marijuana before her qualifying race, will miss the Tokyo Games entirely after coaches decided not to put her on a relay team, American track officials announced Tuesday.

Richardson, who confessed to using marijuana to cope with the death of her biological mother and the pressure to perform at the U.S. track and field trials, could have been selected for the women’s 4×100-meter relay race, an event U.S. women are favored to win and her last option to compete in the Games.

Richardson, 21, the fastest American woman, was suspended 30 days for the drug violation, and her victory in the 100 meters at the trials was invalidated. To make the U.S. team in a track and field event, an athlete must finish in the top three in the trials meet and have met the Olympic standard.

However, track officials are able to pick at least two athletes for the relay regardless of their performance at the trials. Since the relay takes place after Richardson’s suspension ends, she could have been named to the team.

But the coaches had already selected the members of the relay squad and informed those runners of their selection before Richardson’s positive test became public. After Richardson’s disqualification, the coaches chose the next six finishers in the 100-meter race. The coaches decided it would be unfair to take a slot away from one of those runners and give it to Richardson simply because it was now the only way to get her on the team. Also, the organization’s selection criteria do not include a provision for that sort of substitution.

In a statement released Tuesday, U.S.A. Track and Field expressed its sympathy to Richardson and called for a re-evaluation of antidoping rules on marijuana use. However, the organization said it would harm its team if it amended its selection rules to make room for Richardson after the conclusion of the trials competition.

“All U.S.A.T.F. athletes are equally aware of and must adhere to the current antidoping code, and our credibility as the national governing body would be lost if rules were only enforced under certain circumstances,” the organization said. “So while our heartfelt understanding lies with Sha’Carri, we must also maintain fairness for all of the athletes who attempted to realize their dreams by securing a place on the U.S. Olympic Track & Field Team.”

Richardson’s agent, Renaldo Nehemiah, a former world-record holder in track, said Richardson was devastated when she learned she would not be going to Tokyo because of the drug violation and is now focused on competitions after the Olympics. Nehemiah said Richardson did not petition to be included on the relay team.

Richardson was competing in Oregon, where marijuana is legal for recreational use, at the U.S. trials last month when she said a reporter told her that her biological mother had died. She said the news blindsided her just days before the biggest race of her life.

Richardson, who makes bold statements about her performances and generally backs them up, burst onto the scene this spring with a series of lightning fast races that gave her the rightful claim to being America’s fastest woman. She has drawn attention not just for her speed but for her outspoken nature, her billowing, ever-changing-colors hair and her long fingernails and eyelashes.

Her time of 10.84 seconds in the 100-meter final at the U.S. trials instantly made her a gold medal favorite at the Tokyo Olympics that begin this month, mostly because it was not even the fastest race she has run this year. Richardson completed the distance this spring in 10.72 seconds, the sixth-fastest time in history.

She appeared perfectly positioned to become one of the breakout stars of the Tokyo Games, as well as the kind of celebrity runner that U.S.A. Track and Field, the sport’s governing body in the United States, has been craving for years.

But just days after that win, Richardson pulled out of the 200-meter qualification race, and last Thursday it became clear why — she had tested positive for marijuana after her victory in the 100.

Marijuana is on the World Anti-Doping Agency’s list of performance-enhancing drugs. The research on the drug is limited, but it can have both energizing and sedating effects, depending on the strain of the drug, and it could most often be used as a relaxation aid ahead of an intense moment like the U.S. trials.

Also, the list of banned drugs includes certain substances, the agency says, “because they are frequently abused in society outside of the context of sport.” In other words, doping officials do not want to be seen as giving approval to certain substances that have been historically viewed as damaging to society, even if those views have evolved in recent years.

Richardson’s suspension led to widespread claims of unfairness — though not by Richardson, who apologized for her mistake — because marijuana is legal in numerous states and has been significantly decriminalized in places where it is not legal. It is also viewed far differently by the general population than steroids like synthetic testosterone.

Richardson is one of four elite American runners to miss the Games because of a doping violation. Christian Coleman, the men’s world champion in the 100, is serving an 18-month suspension for missing multiple drug tests. Shelby Houlihan, the American record-holder in the 1,500, was suspended for four years last month after testing positive for nandrolone, an anabolic steroid.

On Friday, the Swiss-based Court of Arbitration for Sport, the highest arbiter of such cases, upheld a five-year suspension for Brianna McNeal, the 2016 Olympic champion in the 100-meter hurdles, for tampering with paperwork related to her explanations for missing a drug test.