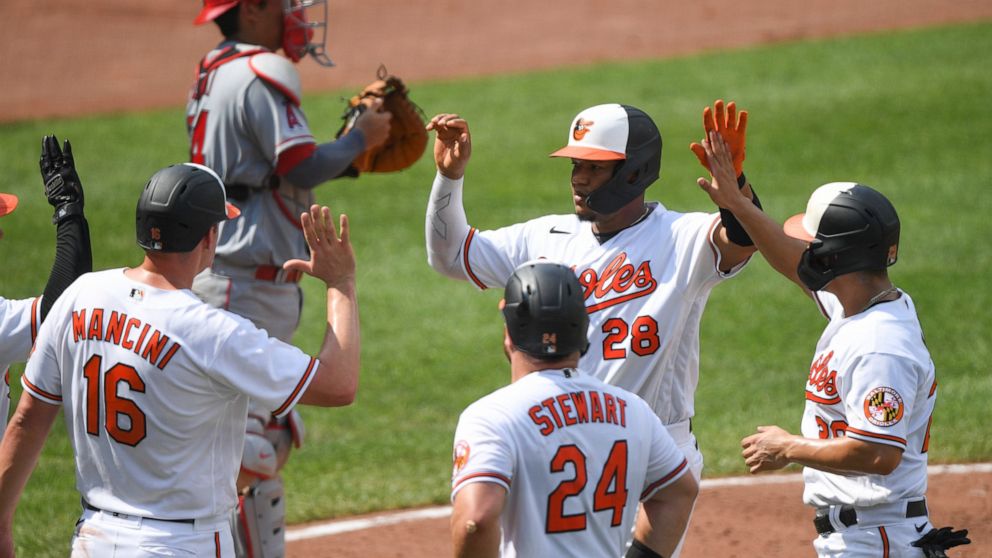 BALTIMORE — A day after ending a 19-game losing streak, the major league-worst Baltimore Orioles handled Shohei Ohtani and the Los Angeles Angels again, getting a grand slam and six RBIs from Pedro Severino in a 13-1 victory on Thursday.

Ohtani led off the game with a homer, his MLB-leading 41st, but that was the only highlight for the Angels, who have lost five of six.

Baltimore won two games in a row for the first time since July 30-31 and took its first series since a three-game sweep of Washington from July 23-25. The Orioles hit three homers off Ohtani a night earlier, although the two-way star left the mound with the lead.

Keegan Akin (1-8) picked up his second career win, allowing one run and three hits with six strikeouts and two walks over season-high seven innings. Baltimore had lost its last 12 games when Akin appeared as a starter or out of the bullpen.

The Orioles led 3-1 in the fifth when Severino hammered reliever Jake Petricka’s first pitch into the center-field bullpen. It was the second career grand slam for Severino and third for the team this season.

Elvis Peguero (0-1) was charged with five of the six runs the Angels allowed in the inning.

Severino added a two-run single in the eighth to score Baltimore’s final two runs. His six RBIs were a career high.

Orioles rookie Ryan Mountcastle went 2 for 4 with a walk and added a two-run single in eighth, extending his on-base streak to a season-high 17 games. Ramón Urias had three hits and two RBIs.

Ohtani hit a towering blast over the right-field wall on the game’s second pitch, his third leadoff homer this season.

The Orioles tied the game in the third on a run-scoring single by Kelvin Gutierrez that scored Jahmai Jones, who doubled off starter Jaime Barria.

The Orioles took a 2-1 lead in the fifth on an RBI single by Trey Mancini that bounced out of the infield. DJ Stewart followed with a run-scoring double.

Angels: OF Justin Upton did not start for a third consecutive game because of a left calf injury.

Orioles: OF Jorge Mateo did not play because of soreness in his lower back.

Angels: Manager Joe Maddon has not announced a starter for the opener of a series against the Padres on Friday. “There’s a lot of different options available to use,” Madden said.

Orioles: Matt Harvey (6-13, 6.27 ERA) gets his 26th start of the season Friday against the Tampa Bay Rays. He’s allowed 14 earned runs and 23 hits over 19 innings over his last four appearances, after throwing 18 1/3 scoreless innings over three starts coming out of the All-Star break.