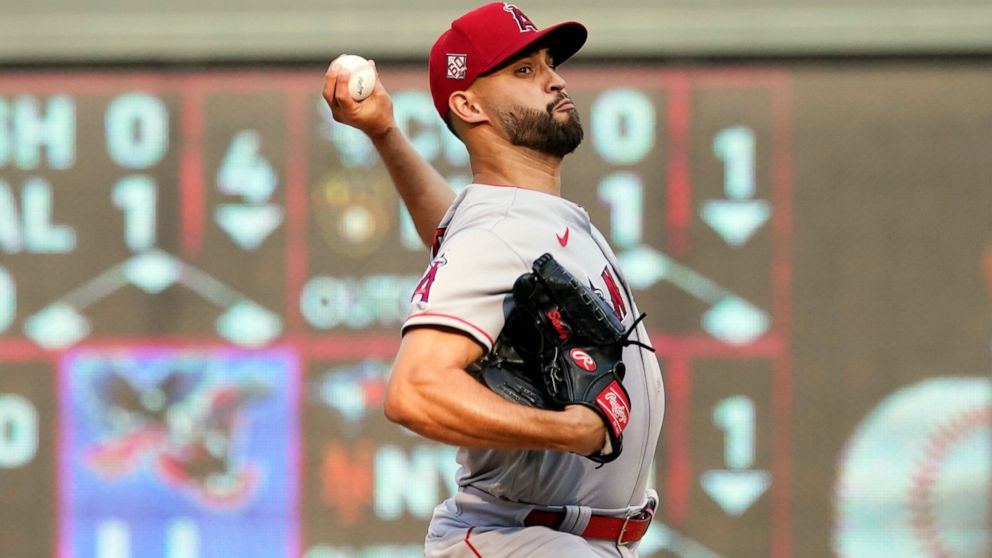 Patrick Sandoval had his no-hit bid broken up with one out in the ninth inning on a soft double by rookie Brent Rooker, and the Los Angeles Angels beat the Minnesota Twins 2-1

MINNEAPOLIS — Patrick Sandoval had his no-hit bid broken up with one out in the ninth inning on a soft double by rookie Brent Rooker, and the Los Angeles Angels beat the Minnesota Twins 2-1 Saturday night.

Sandoval, a 24-year-old lefty who began the game with a 3-13 career record, struck out a career-high 13.

There have already been seven no-hitters in the majors this season. The big league record of eight was set in 1884, the first year overhand pitching was permitted.

The Twins hadn’t come close to a hit until Rooker, who fanned his first three times up, flared an opposite-field fly that fell just inside the line in right.

Sandoval (3-4) smiled after the ball fell, retired the next batter and then was pulled after 108 pitches. He walked one and hit two.

Closer Raisel Iglesias allowed an RBI double to Josh Donaldson before getting his 21st save in 25 chances.

José Berríos (7-5) allowed two unearned runs in seven innings in perhaps his final start for Minnesota. Berríos, a potential trade candidate after being unable to come to terms on a contract extension, allowed three hits and struck out four.

But, in somewhat unexpected fashion, this was Sandoval’s night

He had made just 26 career starts in the majors. Acquired from the Houston Astros in 2018 in a trade for catcher Martin Maldonado, Sandoval has shown an ability to get swings and misses, but he displayed the knack for shutting a team down on Saturday.

Sandoval kept the struggling Twins at bay with a combination of his sinker, changeup and slow curveball.

Minnesota, who traded Nelson Cruz to Tampa Bay this week in the first of a likely sell-off situation, hardly challenged for a hit against Sandoval.

After Kepler was hit by a pitch with one out in the fourth, Sandoval got Donaldson to ground into a double play. Miguel Sanó reached base on a throwing error by shortstop José Iglesias to start the fifth, but Sandoval struck out the next three batters.

After getting out of another jam in the eighth after hitting Trevor Larnach with a pitch, Sandoval screamed out loud while walking on the mound. Over the final few innings, Sandoval sat alone at the end of the Los Angeles bench.

The Angels plated their two runs in the first off Berríos, who was undone by shaky defense.

Shohei Ohtani doubled and came around on an error by Sanó, who appeared to lose the throw from second baseman Jorge Polanco in the sun. Justin Upton, who reached on the error, scored on a double by Iglesias.

Twins: IF/OF Luis Arraez was placed on the 10-day injured list with a right knee strain. He sustained the injury in Chicago on July 19. OF Jake Cave was returned from his rehab assignment with Triple-A St. Paul and reinstated from the 60-day injured list. OF Kyle Garlick (sports hernia) was moved to the 60-day injured list. … CF Byron Buxton (left hand fracture) played catch on the field before the game, but he’s still wearing a splint on his injured hand. There is still no timetable for his return.

RHP Bailey Ober (1-1, 5.45 ERA) will start for Minnesota in Sunday’s series finale. Ober allowed three earned runs in five innings, tied for his career-high, in his last outing against the Chicago White Sox. Angels manager Joe Maddon had not declared a starter for Sunday, but said it will either be RHP Jamie Barria (0-0, 10.50) or a bullpen game. Barria is currently with Triple-A Salt Lake, where he has a 4.41 ERA.