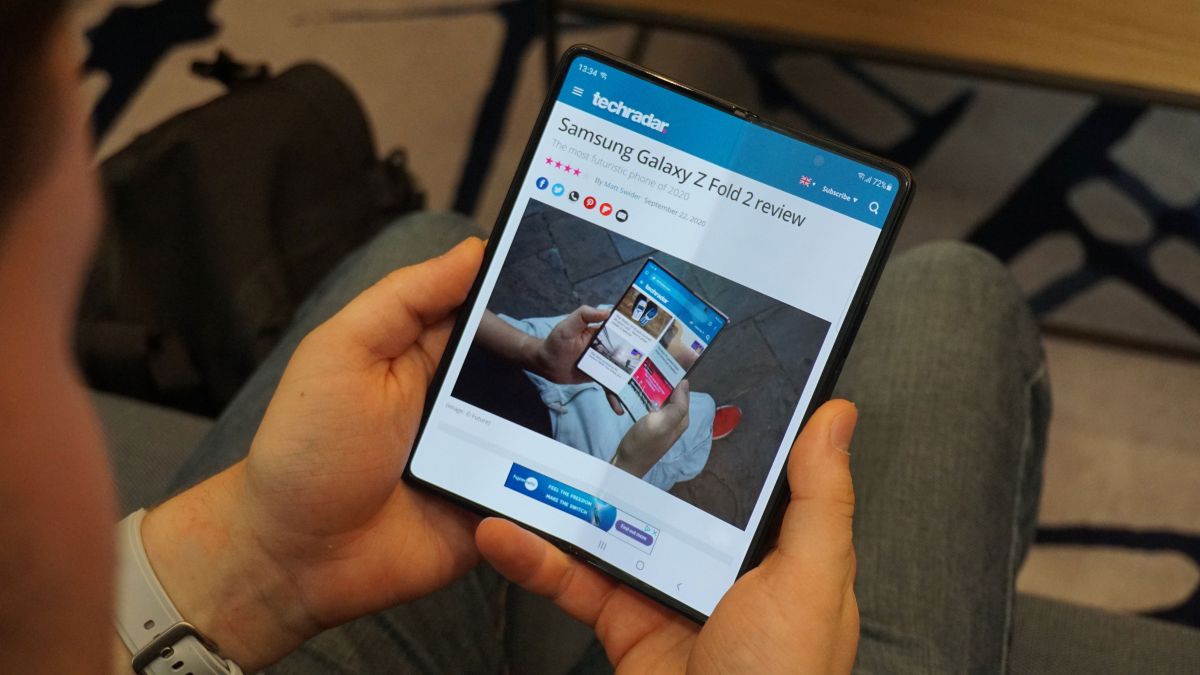 The Samsung Galaxy Z Fold 3 is the foldable phone that’s designed to convince you that the third time’s a charm when it comes to buying into the future of smartphones, and without a Galaxy Note 21, there’s a lot of pressure on Samsung to make good on that adage.

We’ve been hands-on with the Z Fold 3, testing its familiar 2-in-1 design, and determined to fold and unfold the 7.6-inch flexible display until someone told us to stop (no one did in the end). This foldable phone feels more durable than its two predecessors, and it’s waterproof this time around (Samsung did kindly ask us not to dunk it in water – yet), while its tablet-like inner screen withstood our meanest stylus strokes care of Samsung’s new S Pen and S Pen Pro.

S Pen support makes perfect sense on a screen of this size, and it was something that people were clamoring for with the first two Folds. There’s more writing and drawing real estate here than any Galaxy Note smartphone, yet it’s more convenient than a full-sized traditional tablet due to the fact that the Z Fold 3 can be closed to half its open size and stuck in a pocket.

It may well change the way you use your phone day to day, if you spring for the S Pen and a case to carry it in – the stylus is sold separately and doesn’t tuck inside the phone. That’s going to be jarring for long-time Note fans, even if we found the new stylus bigger and easier than the Note’s tooth-pick sized S Pen. Also, dial back your camera expectations: this is yet another foldable with cameras that are good, but which lack the zoom-in oomph of the Samsung Galaxy S21 and last year’s Note 20 Ultra.

The big hook is the slightly cheaper price next to the Galaxy Z Fold 2, and, maybe more convincingly, the excellent Z Fold 3 trade-in deals Samsung is offering in many regions. Those who would ordinarily consider themselves early adopters, but who had their doubts about the first two generations of Samsung’s foldable, were right to hold ‘em, but now it may be time to fold ‘em

The Samsung Galaxy Z Fold 3 release date is Friday, August 27 in the US and UK, while in Australia it’s September 10. Pre-orders are open now in all regions through Samsung’s website, and the phone is gently becoming available from other retailers and carriers in the coming weeks.

The Z Fold 3 price is cheaper than the launch price of the Galaxy Z Fold 2, but be warned: foldable phones are still notably more expensive than conventional top-end smartphones like the Samsung Galaxy S21 Ultra or iPhone 12 Pro Max.

In the US, Samsung is offering some tempting trade-in deals – up to $800 off if you turn in an older device, be it a phone, tablet or wearable, or any combination of the three, and you can add up to four devices to reach that maximum value. You could, then, get this phone for $1,000, and that’s a much more compelling price tag.

In the UK you’ll be able to get up to £250 trade-in on your phone, and pre-ordering will get you a Fold Starter Kit which comprises a charger, a case for your Z Fold 3 and an S Pen stylus.

In Australia, Samsung is offering trad-in discounts up to AU$500, along with a choice of bonus gift bundle, which varies between the two models. You could score Galaxy Buds Pro, Galaxy Buds Live, or one of the power or productivity packs that includes items like the S Pen, phone case and charging mat.

The Galaxy Z Fold 3 retains the book-like design and functionality of its predecessors, with a limited but usable 6.2-inch Cover Display on the outside of the handset that opens up to reveal a massive 7.6-inch display on the inside.

It’s remarkable, even if it doesn’t always seem practical to be carrying such a thick and long device when today’s thin-and-light smartphones are significantly cheaper – although some will believe it’s a price worth paying to get the inner 7.6-inch screen in their pocket and stay ahead of the technology curve.

That inner display uses the same AMOLED tech as on the last-gen smartphone, with a resolution of 2208 x 1768. This isn’t the crispest smartphone screen we’ve seen, but it’s bright, and offers a great picture when you’re watching video or just scrolling the display.

Running down the center of that screen you’ll see the fold where the handset pushes together. The on-screen image is still visible in this fold, but the crease is noticeable when you unfold the device and view the full-size display.

Samsung has made some improvements to the hinge here, and the materials being used are more durable than those employed in all previous foldable attempts. There’s a noticeable difference here when you unfold the phone, and it feels sturdier than the Galaxy Z Fold 2, although durability issues are likely to remain a concern for some.

You’ll get optical image stabilization in the telephoto and ultra-wide cameras on this device, and we found the image quality from the nearly identical Galaxy Z Fold 2 cameras to be good, but last year we noticed that the Note 20 Ultra outshone it noticeably.

Now that we’re in 2021, some Note fans may expect more – and the S21 Ultra, which also uses an S Pen stylus, may be an option for those who value camera capability over form factor. Foldable phones have just about everything except top-end camera prowess.

There are two further cameras on the Galaxy Z Fold 3, both of which are designed for selfies. On the phone’s outer screen you’ll find a 10MP f/2.2 shooter, which matches what we saw on the Z Fold 2.

More significantly, the Z Fold 3 also comes with Samsung’s first commercially available under-display camera, which is hidden under the screen on the right-hand side of the inner screen – although when we say it’s hidden, it’s not entirely invisible. You’ll be able to see the camera poke through when the screen is off, and when the screen is on there’s a slight matrixing effect that means you’ll always be aware of where the camera is.

This is a 4MP f/1.8 camera, and we found it to work notably less well than the camera on the front screen. Photos taken with this camera were much less sharp, and we can see a lot of people defaulting to the ‘regular’ option for their selfies.

The Galaxy Z Fold 3 runs on the Qualcomm Snapdragon 888 chipset – at least that’s the chip we’ve been told is in the variant that will be on sale in the UK, while Samsung hasn’t clarified the specs for the US model.

The Snapdragon 888 is the chipset we’ve seen in the vast majority of top-end smartphones in 2021, and it performs superbly in our experience, so we don’t expect any performance issues here. The processor is paired with 12GB of RAM.

You have the option of 256GB or 512GB of on-board storage, but there’s no Samsung including microSD support for extra space. That was the case for the Galaxy Z Fold 2, so it would make sense here.

Powering the Samsung Galaxy Z Fold 3 is a 4,400mAh battery, which is 100mAh smaller than the battery in the Z Fold 2 – we assume that Samsung has shaved a little off the battery’s physical size so that it can trim down the size of the handset a touch.

We can’t comment on the battery life of the Z Fold 3 yet, as we haven’t had the chance to use it extensively, but we found that the Galaxy Z Fold 2 was able to last a whole day, and we expect it to be a similar story here.

There’s no charger in the box with the Galaxy Z Fold 3, so you’ll want to keep your existing charger or buy one separately.

The Galaxy Z Fold 3 runs Android 11 with Samsung’s own One UI overlay on top. There are some optimizations here to suit the foldable design – for example, the keyboard on the screen appears in two separate sections – and it’s largely similar to what we’ve seen on previous foldables.

The S Pen is a major addition here – it’s the first time Samsung has included stylus support in a foldable phone –  but it isn’t a must-have feature from what we’ve seen so far.

If you enjoy using a stylus with your phone, you’ll love using the S Pen on this handset’s big screen. However, there isn’t a clear place to store your stylus – you’ll need to opt for a particular case to have a place to put it – and it costs extra on top of the handset.

Frustratingly, however, there’s nowhere on the phone to store the stylus – no slot, as on the Note series, and no magnetic connection, as on Apple’s iPads. Instead you’ll have to pay extra for a separate case that you’ll need to slip into your pocket alongside the phone.

The stylus worked well in our limited time testing the phone. It does feel a bit odd to run the pen over the middle element of the main screen, as you can feel where the handset bends, although as long as you don’t press too hard it doesn’t feel like you’ll cause any damage.

It’s also important to note here that the S Pen will only work with the main, inner display on this handset – you can’t use it on the outer screen.

The Samsung Galaxy Z Fold 3 could be the breakthrough device for those who’ve been on the fence about switching to a foldable phone over the last two years.

S Pen support, which everyone was clamoring for a year ago when the Z Fold 2 premiered, finally debuts on a foldable, with Samsung transferring stylus functionality to its foldable flagship as it looks set to discontinue the Note line.

You don’t get Samsung’s best cameras, but the slightly lower price compared to last year’s Fold (and, in some regions, excellent trade-in offers), make this foldable phone an accessible option for early adopters who previously hit snooze button on the 2-in-1 phone idea but now want some much-needed wow factor in 2021.