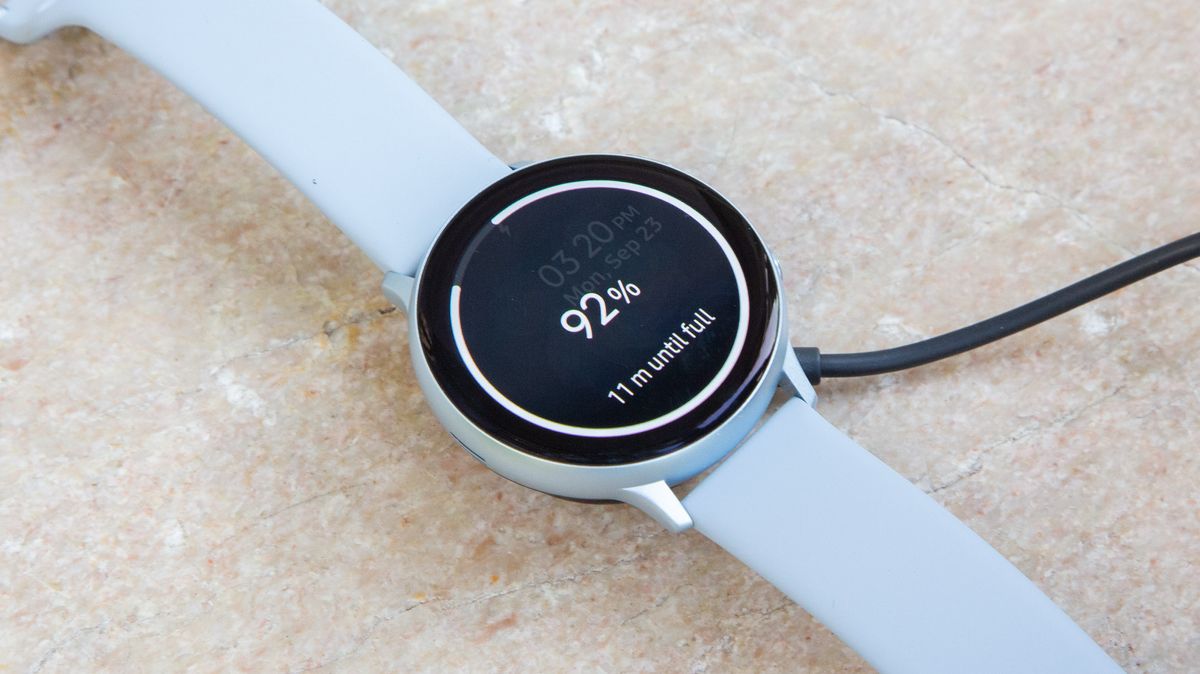 The Samsung Galaxy Watch Active 4 – not Watch Active 3 – could be Samsung’s next fitness-centric smartwatch. While the ‘Active 3’ suffix seems a no-brainer, given the last one was the Watch Active 2, rumors suggest Samsung is skipping the 3.

The Watch Active 2 landed well over a year ago now, and Samsung’s scattered smartwatch release schedule has left those clamoring for the next health device empty-handed.

Whatever it’s called, we could see it soon though – Samsung Galaxy Watch Active 4 rumors have been slowly increasing, hinting at an imminent release, perhaps as soon as June and almost certainly by August, at an anticipated product launch where the Watch 4, Galaxy Tab S7 Lite, Galaxy S21 FE, Galazy Z Flip 3 and Galaxy Z Fold 3 all have a chance at appearing.

A number of things have been leaked and rumored about the Samsung Galaxy Watch Active 4 (some of them when we thought it’d be the Active 3), all of which you’ll find below, along with more precise information on the likely release date.

Based on current leaks it sounds like the Galaxy Watch Active 4 could be visibly similar to its predecessor, but with some significantly upgraded internals, which could be enough to make it one of the most exciting smartwatches of the year.

The latest leaks around this Samsung smartwatch suggest that it’s going to come with a generous 16GB of RAM and that it will get its official unveiling on August 11.

There is evidence that a new Samsung smartwatch is coming soon though, as wearables with model numbers associated with such a device have recently been spotted.

What’s becoming increasingly clear though is that it now looks likely that the Galaxy Watch Active 3 will get skipped entirely (just like the Galaxy Watch 2 was), and that Samsung will start numbering its flagship watch and the Active variant in the same way in the latter half of 2021.

Indeed, a leak from May 2021 calls this wearable the Galaxy Watch Active 4 and says that it’s “coming soon”. Another tipster suggests that we’ll see the wearable launch alongside a bunch of other Samsung devices on August 3, 2021, while the slightly later date of August 11 has also been put forward by more than one source. We’ve also seen Amazon Canada list it with an August 27 release date.

On the other hand, it might be a lot further out – if it lands at all – as Evan Blass (a leaker with a great track record) has suggested that they don’t think it’s coming anytime soon. They made this claim in late June, 2021, so this is very much at odds with other leaks.

The biggest claim we’ve heard here is that an upcoming Samsung wearable might run Wear OS. This was first said by a leaker with a decent track record, but they didn’t name the wearable, so it might not be the Galaxy Watch Active 4.

Then, a Samsung wearable codenamed ‘Merlot’ was spotted alongside mention of Wear OS in some Samsung Galaxy S20 source code. So it’s looking very likely that such a device is in the works, but we’re still none the wiser from that as to exactly what smartwatch it will launch as.

Another source has also said that the Galaxy Watch Active 4 will run Wear OS, but that it will be overlaid with a new version of Samsung’s One UI, designed to make the interface reminiscent of the one on current Galaxy Watch models. Apparently the wearable might also have a walkie-talkie mode.

Some of the biggest news on this front though comes from Google itself, which has announced that the upcoming Wear OS update was made was Samsung’s help. That doesn’t mean the Watch Active 4 itself will switch to Wear OS, but it seems likely.

Samsung has also said that the ‘Galaxy Watch 4’ will run this new OS, though since Samsung is thought to have two smartwatches on the way and there’s some disagreement on what each is called, there’s still an outside chance that it won’t run Wear OS, though it looks incredibly likely to.

This comes from a leaker who also hinted at the colors, saying these wearables would come in the same shades as the next Galaxy Z – which rumors suggest could arrive in black, beige, green, and light violet (or some combination of that, depending on whether they’re talking about the Galaxy Z Fold 3 or the Galaxy Z Flip 3).

This source also said the hardware won’t be much different to the Galaxy Watch Active 2, and that like that wearable it won’t have a rotating bezel.

You can see this seems to be the case in renders posted early by Amazon Canada, which show the likely design, one of which you can see below.

This listing also included some details, such as 1.19-inch and 1.36-inch screen sizes and a 40mm or 44mm body in aluminum. Features meanwhile are said to include NFC, GPS, body composition analysis, advanced sleep tracking, V02 Max, blood oxygen monitoring, and a heart rate monitor.

We’ve also seen unofficial renders of the Galaxy Watch Active 4, one of which you can see below, and they do show a familiar design.

It’s not identical to the Watch Active 2 in these renders though, with different shaped buttons, a strap that joins the body with no gap, and flatter sides. The source of these images also claims that the Samsung Galaxy Watch Active 4 will come in black, silver, green and gold shades, and in the same 40mm and 44mm sizes as its predecessor.

We’d also previously heard that it might not look much different to the Samsung Galaxy Watch Active 2.

Another source has also said to expect aluminum and stainless steel models, but with smaller bezels than the Galaxy Watch Active 2 and – perhaps most excitingly – a new 5nm chipset, which could make for an enormous upgrade in power and efficiency.

We’ve now heard more about that chipset too. Apparently it’s called the Exynos W920, and it’s said to offer 1.25x faster CPU processing times than the chipset used in Samsung’s previous few smartwatches, as well as 8.8x smoother graphics performance. Apparently the wearable will also have 1.5GB of RAM.

Some leaks also point to there being two different screen sizes (supposedly 40mm and 42mm – making this smaller in the top size than the Watch Active 2, though this is at odds with a leak above), but with a bigger 330mAh battery in the smaller model (up from 247mAh in the Samsung Galaxy Watch Active 2).

It’s possible that there would also therefore be a bigger battery in the 42mm model, but we don’t know how much bigger yet, and given that this would be a smaller screen and case than the 44mm Watch Active 2 there might actually not be.

In terms of features, we’ve heard an upcoming Samsung wearable will have a glucometer for measuring blood sugar levels. It’s not clear if this is the Galaxy Watch Active 3 or Galaxy Watch 4 – maybe both – but as a health-related feature, it seems a good fit for the Watch Active.

There are a number of things we’d like Samsung to change, upgrade, and add for the Galaxy Watch Active 4. The following seven are the main ones.

Technically the Samsung Galaxy Watch Active 2 already has an ECG (electrocardiogram), but despite being advertised at launch, at the time of writing it has still not been activated.

So while we fully expect the Samsung Galaxy Watch Active 4 to have ECG hardware, we also want the software to be functioning from day one.

While no wearables are home to the same sort of app selection as you get on smartphones, the Samsung Galaxy Watch Active 2 is particularly lacking.

That’s thanks to Samsung using Tizen, which has a smaller app offering than Wear OS, which is in turn more limited than watchOS.

We’re not sure how much Samsung can do about this, but it could probably work to incentivize developers to make apps for the platform, so we’d like to see it try.

3. A rotating bezel or crown

With the limited space available on smartwatches, a physical rotating bezel or crown can be a great alternative to swiping across the screen to navigate the interface, but this isn’t offered by the Samsung Galaxy Watch Active 2.

Sure, there’s a digital dial, which is better than nothing, but this still involves interacting with the screen. So for the Samsung Galaxy Watch Active 4 we’d like to see this moved external.

The Samsung Galaxy Watch already has a rotating bezel, so imitating that would be an obvious option, but a rotating crown might be better – it’s a more compact solution, and would help differentiate the two devices.

An upgrade in RAM wouldn’t go amiss either, so that the Galaxy Watch Active 4 feels like a slick, speedy, flagship device.

The Samsung Galaxy Watch Active 2 is packed full of exercise-tracking features, but not everything is measured accurately. In our review we found that it struggled with certain exercises, despite having modes for them, with crunches for example only being registered when the hand (and therefore also the Watch Active 2) was extended far over the knees.

If an activity can’t be tracked reliably then there’s arguably not much point in tracking it at all, so we’d like to see this improved for the next model.

6. Make it fit for diving

The Samsung Galaxy Watch Active 2 can survive and even track a swim, but it’s not suited to diving, which, while not unusual, does slightly limit it in a pool.

So for the Samsung Galaxy Watch Active 4 we’d like to see its water resistance upgraded so that you won’t have to take it off before jumping in. Better yet, we’d like to see Samsung add a specific dive-tracking mode as well.