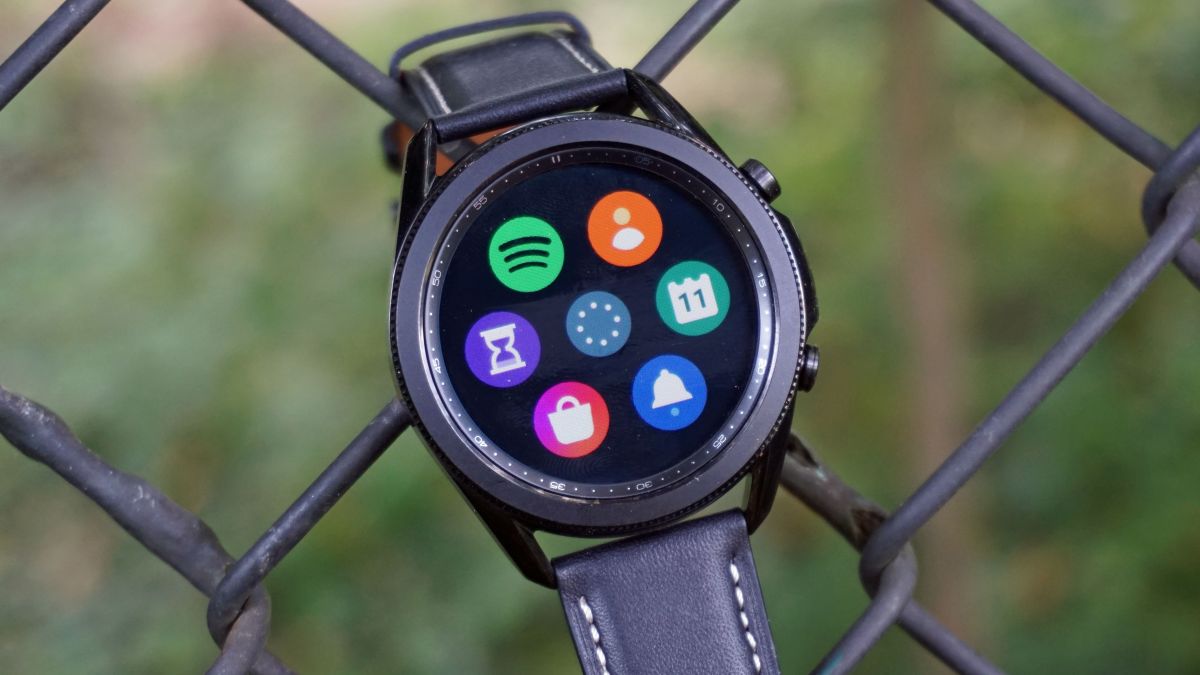 The latest news suggests Samsung’s two wearable lines, which have previously alternated in release, could launch together in 2021, while still sporting distinct designs and features.

This is just the latest of plentiful leaks and rumors that have emerged about the next top-tier Samsung smartwatch, and you’ll find them all below. Then further down you’ll find our wish list of all the key improvements that we want from the Samsung Galaxy Watch 4 Classic.

From features that actually work on day one to a better app situation, there’s a lot that could be improved for Samsung’s next smartwatch, as you’ll see below. There are a host of things that we wished were better on the Samsung Galaxy Watch 3, and we outline what’s left to improve on the new smartwatch.

We’ve also included an educated guess at when we’re likely to see the Galaxy Watch 4 – and what it might cost.

It sounds as though the Samsung Galaxy Watch 4 Classic will come with a hefty 16GB of RAM and be unveiled on August 11, according to the most recent rumors we’ve heard.

What is it? The next top-end smartwatch from SamsungWhen is it out? Perhaps August 11How much will it cost? We’re not sure, but probably a lot

Samsung has confirmed that the next Galaxy Watch will be unveiled “this summer”, which presumably means July, August or September.

Plus, a recent leak hints that August 3 is going to be the big day – and that the Galaxy Watch 4 will appear alongside the Galaxy Z Fold 3 and Galaxy Z Flip 3, among other devices. Another tipster says that August 11 will be the date, and that’s now been backed up by a second source.

Whenever it’s announced, it will probably be another two weeks or so from then to when it’s actually released, so don’t expect to have the Galaxy Watch 4 on your wrist before late August. Amazon Canada for its part has it listed as releasing on August 27.

There may be a watch that’s actually called the Galaxy Watch 4 too, but that’s now thought to be the Samsung Galaxy Watch Active 4 in all but name. In any case, that one could start at around 350-370 euros (roughly $425/£310/AU$570) according to this leak.

Samsung has confirmed that the Galaxy Watch 4 will run its new One UI Watch interface, which will be overlaid on top of the new version of Wear OS that the company has built with Google.

Samsung has also detailed some aspects of the software, saying for example that this will include access to the Google Play Store and Google apps, plus faster app load times and more accurate sensor readings.

If you pair the wearable with a Galaxy smartphone then you’ll also benefit from things like apps being automatically put on your wearable when they’re installed on your phone.

Prior to this announcement, the presence of this new operating system had been extensively rumored by numerous leakers, including in the tweet below from February, and there was even evidence of this found in Samsung source code, so it doesn’t come as much of a surprise.

We’ve now seen what’s close to an official look at the Samsung Galaxy Watch 4 Classic, as Amazon Canada has listed it early.

You can see it in the image below, and it matches previous leaks (more on which further down). The listing also included some details, such as 42mm and 46mm sizes, with 1.19 and 1.36-inch screens respectively and a stainless steel build.

You can see these below, and they show a rotating bezel, two large buttons on the right edge, and a choice of white, grey or black colors. Details mentioned alongside the renders include a choice of 42mm, 44mm and 46mm sizes, the use of standard 20mm watch straps, a choice of aluminum or stainless steel cases, and both 5ATM water resistance and MIL-STD-810G certification.

Similar images have now been leaked showing off the watch from all angles.

For another look at the Samsung Galaxy Watch 4 Classic, take a look at the rotating GIFs below. These come from a leaker with a great track record, and they match other leaks, so they’re likely accurate.

We’ve also seen leaked renders supposedly showing the standard Samsung Galaxy Watch 4, some of which you can see below. These show a sporty-looking watch that was previously thought to be the Samsung Galaxy Watch Active 4, but is now rumored to be dropping the Active from its name.

It’s worth noting that this probably isn’t the ‘Galaxy Watch 4’ that we’re mostly talking about in this article (which is now thought to be launching as the Galaxy Watch 4 Classic instead) but as there’s still some uncertainty we’ve included them.

In other design news, we could see the Galaxy Watch 4 have to change its shape and size to accommodate batteries from a new supplier. It’s yet to be seen if there are any benefits to the battery being changed, though it’s most likely part of an agreement between Samsung and ATL – who partnered up in 2019 again after the companies cut ties in 2017 over Galaxy Note 7 fires.

But the bulk of the leaked renders don’t show much change to the design, and indeed we’ve elsewhere heard from another source that the Samsung Galaxy Watch 4 will have a similar design to its predecessor, complete with a rotating bezel, and that it will be available in the same colors as 2021’s “Galaxy Z.”

That last bit is deeply unclear, both because no Galaxy Z models have launched yet this year, and because it’s not clear whether they mean the upcoming Galaxy Z Fold 3 or the Galaxy Z Flip 3.

However, rumored colors for those phones include black and green for the Fold 3, and black, beige, green, and light violet for the Flip 3.

We’ve also heard that the Samsung Galaxy Watch 4 may come in 42mm and 46mm sizes, both of which are 1mm bigger than the options on the Galaxy Watch 3, but they’re sizes that match what we’ve heard elsewhere.

That chipset has since been detailed in another leak. Apparently it’s called the Exynos W920 and it’s said to offer 8.8x smoother graphics performance and 1.25x faster CPU processing times than the Exynos 9110 in the Galaxy Watch 3. The wearable might also come with 1.5GB of RAM (up from 1GB in its predecessor), while storage space is tipped to come in at 16GB, a big upgrade.

On the battery front, a certification listing out of Finland mentions a 247mAh battery. That’s the same size the 41mm Galaxy Watch 3’s battery, and suggests that the larger Galaxy Watch 4 will also match its predecessor at 340mAh. The listing also mentions 5W charging.

One rumor also suggests an upcoming Samsung Galaxy smartwatch will have a glucometer, for measuring the blood sugar of the wearer. It’s not clear if this is for the Galaxy Watch 4 or Galaxy Watch Active 3, or both.

Another leak explicitly states that the previous one is wrong, though and that the Watch 4 won’t have a glucometer, so maybe it won’t.

Another rumored health feature is a BIA (bioelectrical impedance analysis) sensor, which could allow the wearable to measure your body fat and muscle mass. An Amazon Canada listing for the wearable also mentions body composition analysis, which sounds along the same lines.

As excellent as the Samsung Galaxy Watch 3 is, there’s always room for improvement, and we think Samsung would do well to start with the following five things.

Battery life is a problem with a lot of smart devices, and the Samsung Galaxy Watch 3 is no exception. While its life isn’t terrible, it does need charging every two to three days in our tests.

Worse still, the size of the battery and the life it delivers are both actually a step down from the original Samsung Galaxy Watch, so for the Samsung Galaxy Watch 4 we want to see a return to form, with a battery that can go four to five days between charges.

That might be tricky while keeping the wearable slim, but if any company can do it it’s one with the resources of Samsung.

So for the Samsung Galaxy Watch 4 we want a lower starting price, perhaps more in line with the original Galaxy Watch, which started at $329 / £279. At the very least though we really hope Samsung doesn’t further push the price up.

The Samsung Galaxy Watch 3 is packed full of health features, including an ECG (electrocardiogram), blood pressure monitoring, and an SpO2 monitor for detecting sleep apnea, but none of them were available in all regions at launch.

That’s because these features each need certifying by regulatory bodies in most countries before being activated in them, but it was a shame to have a premium product where many of its advertised features didn’t initially work.

So for the Samsung Galaxy Watch 4 we want these features to still be included, but we want them all to be active everywhere on day one.

For its Galaxy Watch wearables Samsung has opted to use Tizen, rather than Wear OS. That’s not entirely a bad thing since Tizen has a lot to like about it, but one area where it struggles even more than Google’s smartwatch operating system is apps.

As well as only offering a rather limited number of apps, it also lacks some of the most useful smartwatch ones, such as Google Maps.

We’d love to see this situation somehow improved for the Galaxy Watch 4, whether it’s through Samsung somehow incentivizing developers to bring more apps to its device, or producing more and better apps of its own to make up for the omissions.

5. A new chipset and more RAM

While performance is solid, it’s definitely time Samsung improved both the chipset and RAM situation, so we want a new one of the former and at least 1.5GB of the latter in the Samsung Galaxy Watch 4.