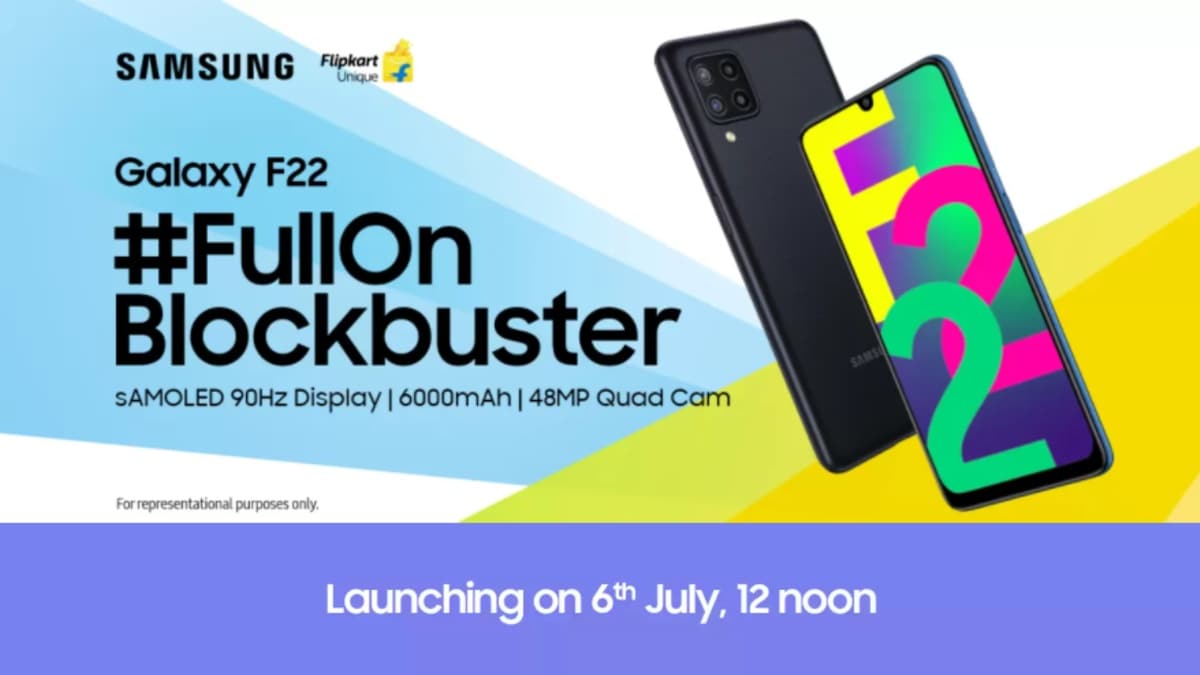 Samsung Galaxy F22 launch in India will take place today (Tuesday, July 6). The upcoming Samsung phone will be the fourth smartphone in the Galaxy F-series — after the Galaxy F02s, Galaxy F12, and Galaxy F62 — to debut in India in 2021. Ahead of the official announcement, Samsung Galaxy F22 specifications have also been revealed on Samsung’s official website and Flipkart. The handset is said to be a rebranded version of the Samsung Galaxy A22 that launched in Europe earlier this year.

Samsung Galaxy F22 price in India was suggested in a report by 91Mobiles that claimed the phone could be priced under Rs. 15,000.

Samsung is scheduled to launch the phone today at 12pm (noon). It will be available for purchase via Flipkart and Samsung India online store.

Some Samsung Galaxy F22 specifications have been revealed by the South Korean company. The handset will pack a 6.4-inch HD+ sAMOLED display with a 90Hz refresh rate. Samsung is offering a quad rear camera setup with a 48-megapixel primary sensor on the phone. The smartphone will come with a 6,000mAh battery. As per its Google Play Console listing, the smartphone could feature a display with a 720×1,339 pixels resolution and run Android 11. The listing also suggests that the phone will be powered by a MediaTek MT6769T, which is MediaTek Helio G80 SoC, paired with 4GB of RAM.

Sourabh Kulesh is a Chief Sub Editor at Gadgets 360. He has worked in a national daily newspaper, a news agency, a magazine and now writing technology news online. He has knowledge on a wide gamut of topics related to cybersecurity, enterprise and consumer technology. Write to sourabhk@ndtv.com or get in touch on Twitter through his handle @KuleshSourabh.
More