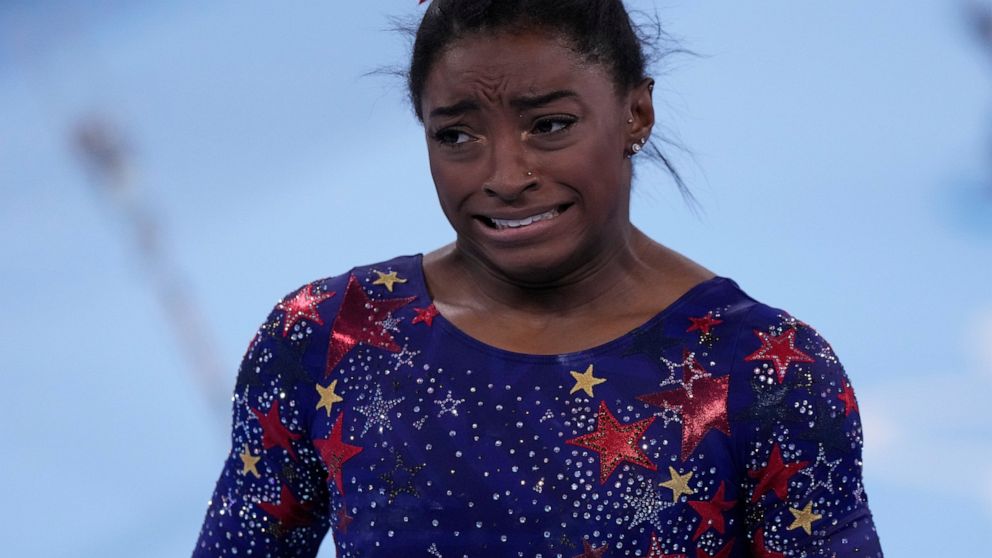 The U.S. women’s gymnastics team’s bid for a third straight Olympic title is off to a rocky start

By WILL GRAVES AP Sports Writer

TOKYO — The routines Simone Biles puts together are so difficult that she can afford a misstep or two and still dominate.

The country she represents? Maybe not so much anymore.

While the reigning Olympic gymnastics champion began her quest for a repeat by topping qualifying on Sunday, the four-woman U.S. team looks to have a serious fight on its hands if it wants to claim a third straight crown.

The Russians posted the top team score of 171.629 through the first three subdivisions at the Ariake Gymnastics Centre, the first time in more than a decade that the Americans failed to finish atop the standings during any portion of a major international event.

While Biles leads the all-around with a total of 57.731, it didn’t come easy. She stepped all the way off the mat following a tumbling pass on her floor exercise, then basically did the same on vault. She responded with a solid set on uneven bars, but a spectacular beam routine ended with her taking three major steps backward following her dismount.

The 24-year-old who came to Japan as the face of the U.S. Olympic movement saluted the judges with a wry smile, then walked off the podium with a smile that looked like a combination of relief, sarcasm and frustration.

There was a lot to go around.

Jordan Chiles’ remarkably consistent run that carried her to a spot on the four-woman team ended with a major mistake on bars and a fall on beam. Sunisa Lee overcame a so-so performance on floor to surge into second behind Biles with an electric bar routine.

The Americans arrived in Tokyo riding a decadelong winning streak, one fueled in large part by Biles’ unmatched brilliance. Her routines are packed with so much difficulty, it often becomes a matter of math.

For the first time in a long time, when the numbers were added up, the Americans found themselves looking up in the standings at someone else.

ROC’s performance’s offered proof that the former gymnastics superpower is in the midst of a resurgence led by 21-year-old Angelina Melnikova. Even better, the Russians survived the balance beam relatively unscathed.

The 4-inch piece of wood set 4 feet off the ground has been the place where the country’s gold-medal hopes have gone to die in recent years, yet there were no major issues during qualifying. The only major miscue came when Lilia Akhaimova fell off during the end of an acrobatic series.

No biggie. The Russians were allowed to drop her score. Things will be different in the finals, when the meet goes to a “three up/three count” format in which there is no margin for error. While Melnikova stressed that she was not going to forecast what might happen on Tuesday, she does believe what once was a walkover for the Americans will turn into something far more compelling.

“We hope that (we win),” Melnikova said. “We’re also going to struggle and fight. We have to. That’s the expectation for us.”

And for the first time since the 2010 world championships, it suddenly looks doable.