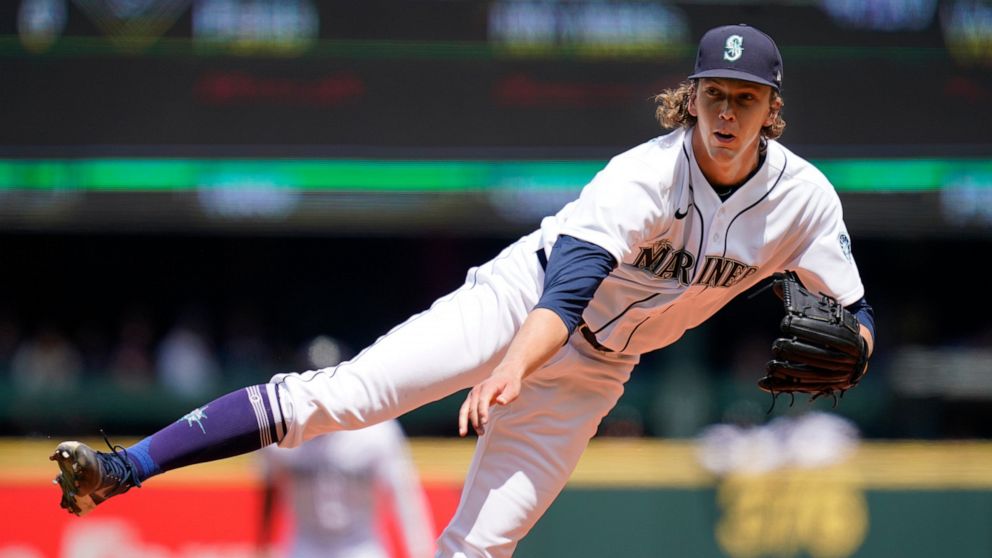 SEATTLE — After two straight days of watching their starting pitcher get battered from the outset, the Seattle Mariners were thrilled to see a clean opening inning from rookie Logan Gilbert.

Gilbert’s day only got better from there.

Gilbert pitched one-hit ball over seven innings in the best start of his young career, Kyle Seager and Dylan Moore both homered, and the Seattle Mariners beat the New York Yankees 4-0 on Thursday.

Seattle salvaged the final game of the three-game set with the Yankees behind a brilliant effort from the top pitching prospect in the organization.

Gilbert was dominant, allowing his only baserunner on Giancarlo Stanton’s double leading off the second inning. Luke Voit was hit with a fastball, but the Yankees were otherwise void of runners against Gilbert.

Gilbert (3-2) set a career-high with eight strikeouts and retired his final 18 batters.

“He was going to be aggressive and he went out and executed,” Seattle manager Scott Servais said. “Nothing really fazes Logan. I’ve said it many times before, he’s well beyond his years and it’ll serve him well in his career, there’s no question about that.”

Paul Sewald struck out a pair in the eighth and Kendall Graveman closed out the one-hitter in the ninth, extending the streak to 22 consecutive batters retired before hitting DJ LeMahieu with a pitch.

Aaron Judge hit into a game-ending double play, and Graveman got into a stare down with LeMahieu as the Yankees briefly milled on the field.

“I don’t want to get into it. He through one in on (Rougned Odor), he threw one in on me. It looks suspicious, but it’s just baseball,” LeMahieu said.

“Frustrating that we got held down but also credit to Gilbert. He was tough and on his game today,” New York manager Aaron Boone said.

After throwing mostly fastballs the first time through the Yankees order, Gilbert began spinning more sliders the second time through. The result was weak contact, uncommitted swings and a handful of strikeouts. Gilbert had 18 swings and misses, 11 coming on his slider.

New York threatened in the second after Stanton’s leadoff double, but J.P. Crawford made an excellent off balance throw to get Brett Gardner at first base for the final out and save a run.

Gary Sánchez hit one home run distance in the seventh but pulled it foul by a few feet down the left-field line.

“Sneaky fastball. He can get it up there on the radar gun. … He kind of settled in and start throwing some pretty good sliders and he shut us down,” LeMahieu said.

Seager’s homer came one day after the Mariners celebrated the 10th anniversary of his major league debut. Moore’s homer was more unexpected. Montgomery recorded the first two outs of the inning with ease, but gave up a two-out single to Luis Torrens and Moore followed with his eighth home run.

Mitch Haniger hit his 19th homer in the eighth inning off Wandy Peralta.

Gilbert is the first Mariners pitcher to throw at least seven innings, strike out at least eight, walk none and allow one or fewer hits since Felix Hernandez’s perfect game in 2012. Per Stathead’s database, Gilbert is the 17th pitcher under age 25 since 1990 to post a stat line with those numbers and first since Colorado’s German Márquez in 2019.

Yankees: Boone said OF Miguel Andújar reported some soreness in his hand and wrist from his final at-bat in Tuesday’s game. Boone said Andújar had X-rays and an MRI but the team was waiting for results. … RHP Michael King was played on the 10-day injured list due to a right middle finger contusion, retroactive to July 5. IF/OF Tyler Wade was recalled from Triple-A Scranton/Wilkes-Barre to take his place. … LHP Zack Britton threw to hitters before Thursday’s game and depending on how he feels coming out of it could be activated this weekend in Houston. Britton has been out since June 26 due to a left hamstring strain.

Mariners: Servais said it’s likely Seattle will have a bullpen day on Sunday when it faces the Angels after LHP Justus Sheffield went on the 10-day injured list with a forearm strain. Servais said an exact timeline on Sheffield is unknown but he’s not expecting him to be ready coming out of the All-Star break. General manager Jerry Dipoto told the team’s flagship radio station that Sheffield also has an oblique strain.

Yankees: LHP Nester Cortes Jr. (0-0, 1.29) will start Friday’s opener in Houston. It will be the second straight start for Cortes after working out of the bullpen previously.

Mariners: LHP Marco Gonzales (1-5, 5.82) tries to rebound from one of his worst starts as the Mariners open a series with the Angles. Gonzales lasted just 3 1/3 innings and allowed six earned runs and three homers in a loss to Texas last weekend.