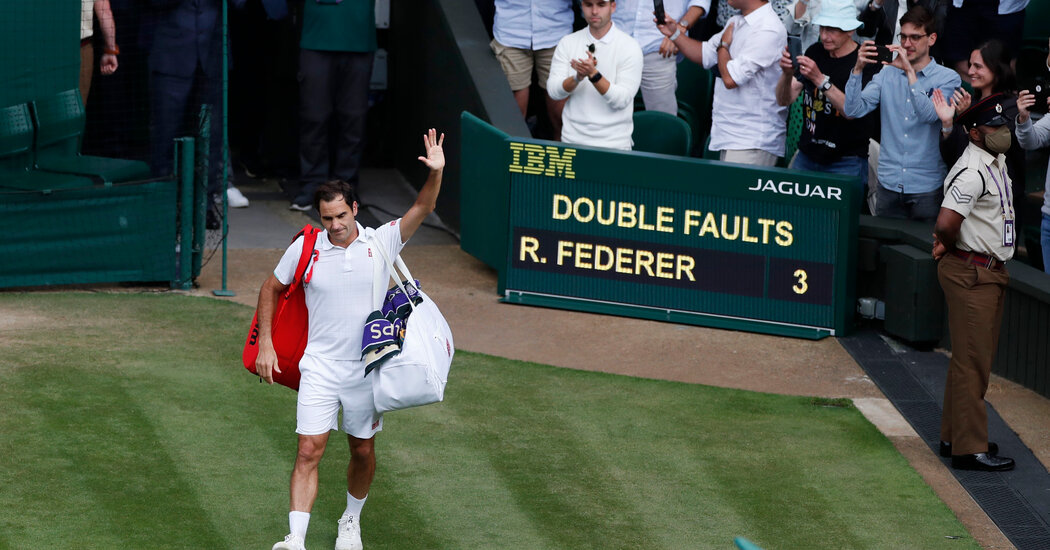 WIMBLEDON, England — On the grass court where he won a record eight men’s singles titles, Roger Federer was defeated, 6-3, 7-6 (4), 6-0, by Hubert Hurkacz on Wednesday in the quarterfinals of Wimbledon.

Shanking forehands and misjudging volleys, Federer, 39 and seeded sixth, was far from his finest on Centre Court, but Hurkacz, the 14th seed, still had to summon the power and gumption to knock him out.

Hurkacz, a good-natured Pole who is based in Florida, had never been past the third round at Wimbledon or any Grand Slam tournament before his visit this year to the All England Club. In 2019, he lost to Federer in straight sets in the quarterfinals of the BNP Paribas Open in Indian Wells, Calif., in their only previous singles match.

But this quarterfinal match, which lasted just 1 hour 49 minutes, will be the one that will remain in both men’s memories and quite a few more, if it turns out to be Federer’s final match here.

He first played here in 1998, winning the boys’ singles and doubles titles and became a star in 2001 by upsetting the seven-time Wimbledon champion Pete Sampras in the fourth round in his first match on Centre Court. In 2003, he won his first Grand Slam title at Wimbledon, defeating Mark Philippoussis in the final.

Though Federer is Swiss, Wimbledon has long felt like home turf with the largely British crowd warming to his elegant game and understated on-court presence. He has experienced great success here but also great disappointment. In the 2008 final, he lost to his younger rival Rafael Nadal in one of the best matches ever played. In the 2019 final, he was unable to convert two match points on his way to defeat against his other signature rival, Novak Djokovic.

The match could have been his last at Wimbledon. He lost the tournament at age 37. Instead, he chose to play on despite two knee surgeries and the long hiatus during the coronavirus pandemic.

Returning to Wimbledon was his biggest motivation, and though he was the oldest man in the Open era to reach the quarterfinals, he could not go further.

After losing the first set, he failed to maintain an early lead in the second set, mis-hitting his forehand and failing to return Hurkacz’s big first serve consistently. He finished with more than 30 unforced errors and could win only 35 percent of his second-serve points.

Hurkacz, 24, like Federer, is an all-court player with fine volleys and a taste for the trick shot: His tweener is one of the flashiest on tour. But it was still a surprise to see him finish off Federer in straight sets at the tournament Federer holds dearest.

After losing the second-set tiebreaker, the third set was over in what felt like a flash — just 29 minutes — after all the time Federer has spent on Centre Court.

This is a developing story.