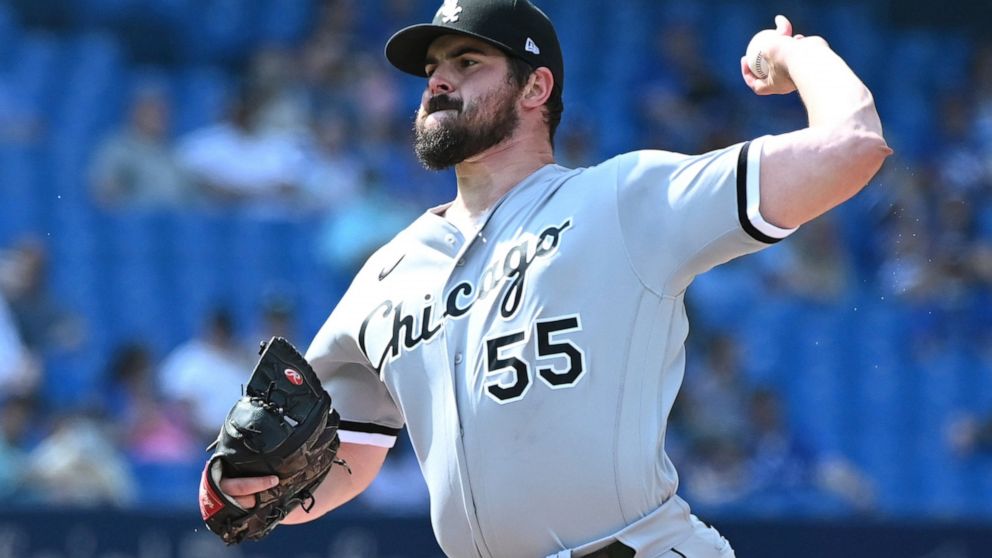 José Abreu, César Hernández and Eloy Jiménez each hit solo shots as the White Sox earned a split in the four-game series.

Rodón (10-5) allowed two runs and five hits in five innings. Activated off the injured list before the game, Rodón hadn’t pitched since Aug. 7 because of a sore shoulder.

Tim Anderson had three hits and two RBIs and Leury Garcia had two RBIs and scored twice as the White Sox held on after building a 9-2 lead.

Marcus Semien hit two home runs for the Blue Jays, a solo shot off Rodón in the first and a two-run blast off Michael Kopech as Toronto closed the gap with a five-run sixth. The homers were his 31st and 32nd.

Ryan Tepera and Garrett Crochet each pitched one scoreless inning of relief and Craig Kimbrel finished for his first save with the White Sox, his 24th in 27 chances this season.

Chicago’s first three home runs came off starter Hyun Jin Ryu (12-7). The left-hander had allowed just one home run over his previous eight starts but gave up three in a span of seven batters in the second and third innings.

Hernández hit a two-out solo shot in the second, his 21st. Robert connected after Anderson’s two-out single in the third, his fourth, and Abreu followed with his 27th.

It was the eighth time in his career Ryu has allowed three homers in a game. He last did it Sept 7, 2020, against the New York Yankees.

Jiménez connected off Trevor Richards in the ninth, his seventh.

The retractable roof was open when the game began but started swinging closed in the top of the fifth. By the bottom half, heavy rain had started falling into the stadium. After allowing three hits in a span of four batters, Rodón asked for the grounds crew to work on the soggy mound. By the time the game resumed, the roof was fully closed.

In July 2003, a game between the White Sox and Blue Jays was delayed for 26 minutes when a summer downpour soaked the field before the roof could finish closing.

Blue Jays: Manager Charlie Montoyo said OF George Springer (sprained left knee) could see more time at DH when he returns from injury, possibly as soon as this weekend. Springer ran the bases, hit in the cage and took batting practice before the game.