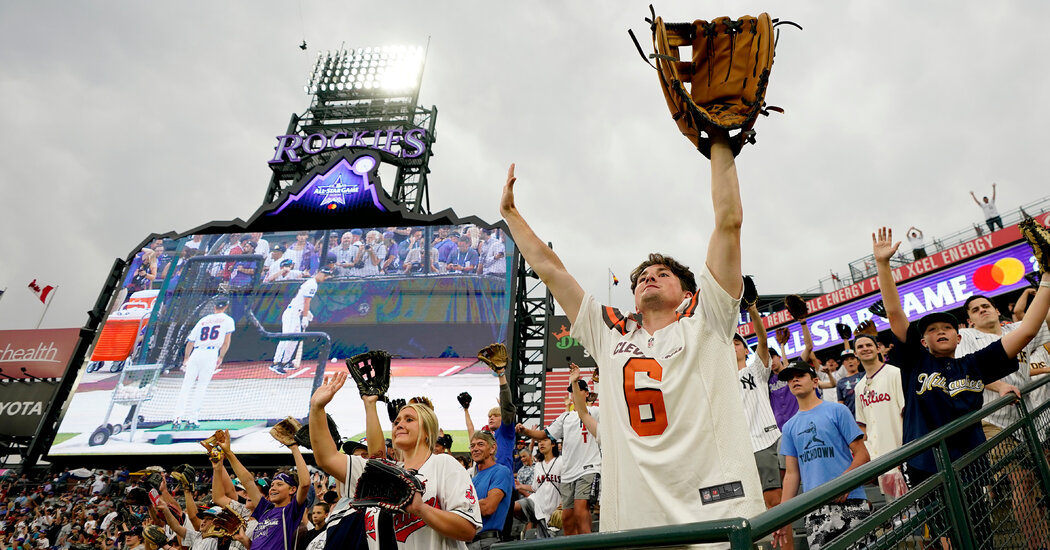 DENVER — Rob Manfred, the commissioner of Major League Baseball, rarely speaks romantically about his sport. But on Tuesday, with the All-Star Game a few hours away after a lonely 2020 summer without one, Manfred gave in to nostalgia. Fifty years ago, at a friend’s house on Brantingham Lake in upstate New York, an All-Star Game captivated him.

“I can vividly recall the great room that we were sitting in, and Reggie Jackson hitting the home run,” Manfred said at a luncheon with writers. “I was 12 years old then, and I don’t think I can remember a single other place where I was on a particular day when I was 12 years old. I think that maybe missing last year’s game has made me focus on how great an event the All-Star Game can really be.”

Alas, even the gauzy return of the midsummer classic, after the pandemic canceled last year’s event, could not escape controversy. In April, Manfred moved the game out of Atlanta in response to Georgia’s restrictive new election rules. The sport’s showcase event shifted here, to Coors Field, and Manfred all but sighed when asked if he would reconsider putting league events in Texas, with lawmakers there pushing for their own overhaul of election rules.

“The decision with respect to Atlanta is probably the hardest thing I’ve been asked to do so far,” Manfred said. “I’m kind of hoping it’s the hardest thing I get asked to do, period. Having said that, I’m not going to speculate on who’s going to pass what law and where we’re going to take jewel events. It’s hard enough to deal with in concrete, real time.”

Manfred and Tony Clark, the executive director of the players’ union, have more pressing matters on their agenda. The sport’s collective bargaining agreement expires on Dec. 1, and while Manfred pointed to his track record — there have been no work stoppages in his 23 full-time years with Major League Baseball — the sides are nearing a critical crossroads.

Players have been skeptical in recent years about owners’ competitive intentions, reflected in lukewarm free-agent offers. Owners have been worried about the entertainment value of a game with more strikeouts and less action on the field and the bases. Players have been hesitant to accept sweeping rule changes, and Manfred has held off on unilaterally introducing some ideas he favors.

“Every conversation about changing the game is implying, on some level, that something’s wrong with it,” Clark said. “For me, the question is: What has changed, why has it changed? When you answer that question, then you can talk about what may need to be adjusted from there. Players are willing to talk about adjustments. Players are also interested in protecting the integrity of what the game has always been.”

Manfred’s office has been actively seeking ways to stimulate offense, installing several rule changes in the minors. He said on Tuesday that he was strongly in favor of eliminating infield shifts (now banned in Class AA), which turn more grounders into outs and encourage hitters to swing for the fences.

The negotiations, Manfred said, offer a chance to reimagine the sport and “restore it to being played in a way that is closer to what many of us have enjoyed historically. The game evolves. What we play today won’t look all that much like 1971. The question is: Which version would you like to get to?”

Recent innovations brought on by the pandemic, he said, are unlikely to last. Extra-inning games have started with a runner on second base for the past two seasons, and games played as parts of doubleheaders have lasted only seven innings each. Both, he said, are “much less likely to become part of our permanent landscape” — though he stopped short of mandating that teams at least offer coupons or discounts as goodwill gestures to fans who bought tickets for nine-inning games that were changed to seven innings.

“Those are things that sound easy,” Manfred said. “They are a lot harder to execute in real life.”

M.L.B. initially wanted to delay the start of the season until early May, but the union rejected the idea, which has proved to be wise. Yet even now, only 23 of the 30 teams have reached the 85 percent vaccination threshold needed to loosen coronavirus restrictions. Before Sunday’s game in Boston, four Philadelphia Phillies players were placed on the Covid-19 injured list.

Clark, who is vaccinated, said the union had not pushed its members to get the vaccine, but had tried to emphasize the importance of doing so.

“Vaccination is important; it’s afforded us an opportunity to keep the wheels on the track,” Clark said. “The more that are vaccinated, the better off we’re going to be. Our players have heard us say that, too. But the idea that there are still games being adjusted — and we’re contact tracing even as we stand here — it is a daily consideration.”

Last winter, Manfred cited the uncertainty over the pandemic as a reason for tabling plans for expansion. On Tuesday, though, he suggested strongly that one franchise could soon be moving.

Three years ago, Manfred said that no other market had the upside of Oakland, where the Athletics have played since 1968, and that the league would regret it if the team ever moved. But the Athletics have soured on the idea of building a new park on the land around their existing stadium — as Cincinnati, New York, Philadelphia and others have done — and a proposed site at Howard Terminal faces a critical vote next week by Oakland’s City Council.

“The Oakland process is at the end,” Manfred said, adding later: “Las Vegas is a viable alternative for a major league club, and there are other viable alternatives that I haven’t turned the A’s loose to even explore at this point. So thinking of this as a bluff is a mistake. This is the decision point for Oakland as to whether they want to have Major League Baseball.”

Manfred may want to return the sport to the way it looked in 1971, but he could not fully do so if the A’s move. The team Jackson played for when he hit his famous All-Star homer? The Oakland Athletics.