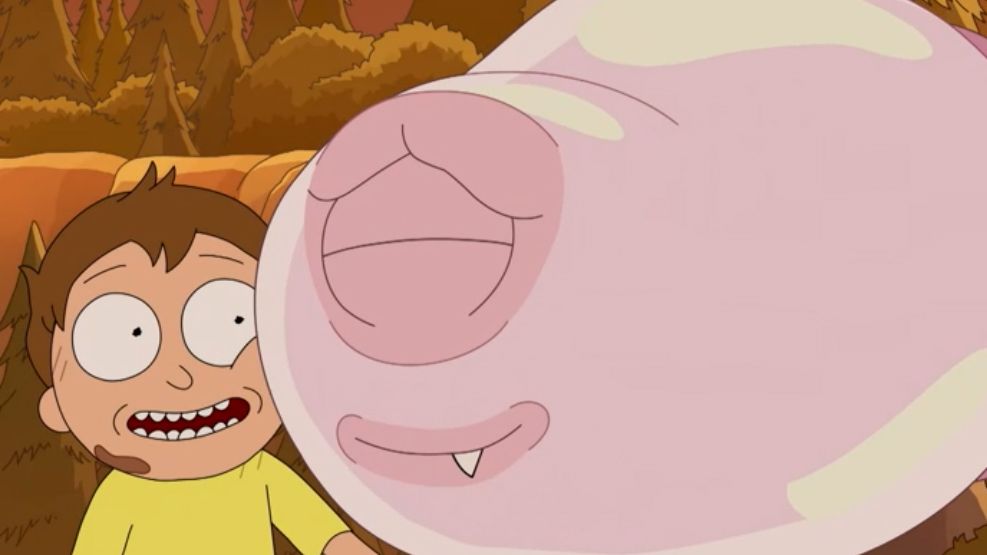 Spoilers for this week’s episode of Rick and Morty follow.

This week’s episode sees Morty on a sort of ‘take your son to work day’ with Beth at the Horse Hospital. When Morty discovers the breeding mount (we’ll let you look that one up), the obvious happens and shows us that Morty really has no limits to how far he’s willing to let his teenage hormones take him. After a week of using the machine for self-pleasure, Morty discovers Rick using one of the barrels of ‘horse’ semen for an experiment that can only go wrong if you’re not using horse semen. And because Morty would rather do anything than own up to his shame, boom – monster sperm alien invasion.

Last week’s ‘A Rickconvenient Mort’ missed the mark because it didn’t go far enough with its concept and environment themes. ‘Rickdependence Spray’ might be disgusting, but it has the opposite effect. It’s outlandish, funny and raunchy enough for you to keep watching with your jaw to the floor, just to see how far the show is willing to take its gross premise. this episode proves there is no limit to how far the Rick and Morty writers will go for some A-grade comedy.

I’m not saying that this episode doesn’t hit the same issues as last week’s. We’ve seen plenty of plots where the Earth is threatened by one kind of invasion or another. Even this season’s ‘Mortiplicity’ starts with a similar premise. The plot is familiar, but the execution is terrific. It plays with fans’ expectations that the show has no boundaries and, for better or worse, it delivers. Every time you think it can’t get any worse than giant flying sperm, there is something in the next scene to top it.

What works especially well about this episode is that it’s driven by one of Morty’s screw-ups; a screw-up so bad it might be worthy of being cataloged as one of Morty’s Mind Blowers. The nice twist is, nobody else but Morty knows that the situation is his fault. Since Morty is the opposite of Rick, there’s never any clever solution. It just gets a lot worse before it gets better.

There are a few Rick-focused elements in the episode, but it’s never the point of ‘Rickdependence Spray’. The CHUD – AKA the underground horse people – reveal is a classic Rick moment, but pretty brief. As we’ve seen many times, he has lots of enemies. Moments like those only work best when they show how far in the deep end he is, and when the episode functions as a smart commentary on Rick’s depression and loneliness. Instead, in this episode, it just adds to Morty’s larger story.

That said, there is a limit to how far the show’s crass humor can go. I could have done without Beth and Summer’s ‘men don’t listen to women’ storyline. It’s a very obvious B plot that doesn’t hold as much weight as the rest of the episode. In fact, it’s probably more cringeworthy than the flying sperm, horse pregnancy, or the incest space baby that caps off the end of the episode – and that’s saying something. The jokes don’t land particularly well and if anything, it just feels tired and uncomfortable to watch the president and his council ignore Beth and Summer’s ideas.

‘Rickdependence Spray’ is an episode you have to see to believe. I appreciate that despite the episode’s namesake, it’s less focused on being a pop culture parody and more determined to be its own extremely weird thing. While some of parts of this episode are predictable, being a witness to the show’s brand of debauchery still has its moments, especially when it decides that nothing is taboo.

Sometimes, it just pays off to be juvenile when it’s genuinely funny. You’ll never be able to look at the Grand Canyon the same way again after this episode.

Rick and Morty season 5 airs every Sunday on Adult Swim in the US, and every Monday on E4 in the UK.