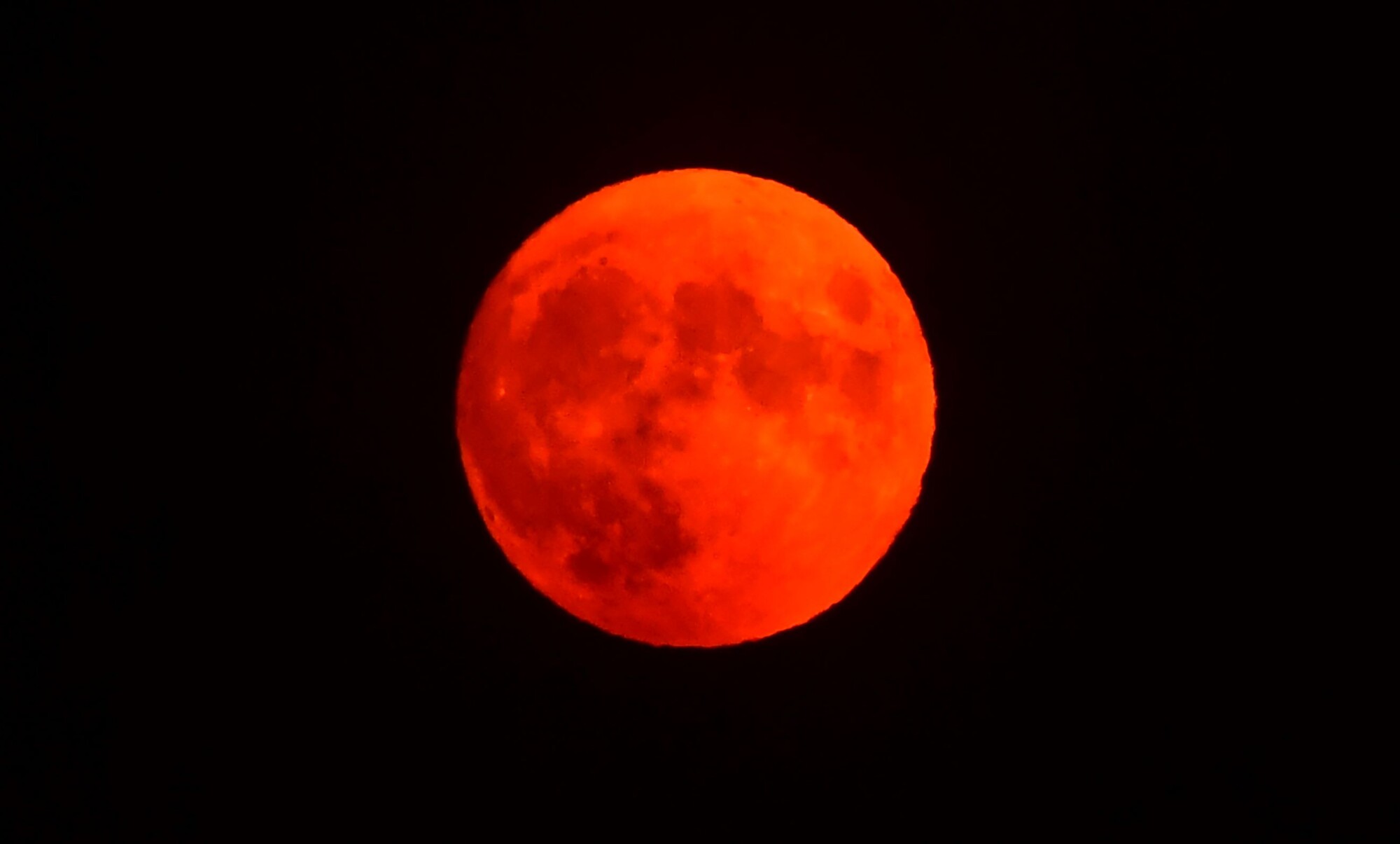 A stunning blue moon illuminated the sky over the weekend.

A blue moon is the third full moon in a season containing four full moons, rather than the usual three, according to Sky & Telescope magazine.

People in the Americas were able to see a nearly full moon Saturday night, before the true blue moon reached its highest point in the sky early Sunday morning at around 1 a.m. ET. The moon reached peak illumination at around 8 a.m. ET Sunday and appeared close to full after dusk that day.

The full blue moon, which happens about once every 2.7 years on average, didn’t actually appear blue, though—that only happens even more rarely, when “volcanic eruptions or forest fires send lots of smoke and fine dust into the atmosphere,” according to Sky & Telescope.

NASA has reported the first recorded use of “blue moon” occurring in 1528, while Sky & Telescope has traced the term’s origin back to the Maine Farmers’ Almanac published in the 1930s.

“Introducing the ‘Blue’ Moon meant that the traditional full Moon names, such as the Wolf Moon and Harvest Moon, stayed in (sync) with their season,” said Diana Hannikainen, Sky & Telescope’s observing editor, in a news release. This was before late amateur astronomer and Sky & Telescope contributor Hugh Pruett incorrectly understood the definition in 1946, and ultimately helped circulate the popular definition of blue moon: the second full moon within a month, the last of which occurred on Halloween 2020, according to Sky & Telescope.

This moon has had many different names. The Maine Farmers’ Almanac first published Native Americans’ terms for the full moons in the 1930s, according to NASA—including the Algonquin tribes’ “Sturgeon Moon,” named after large fish that were more easily caught in the Great Lakes and other bodies of water during this time, and the “Green Corn Moon.”

See all of the Native American names for this full moon on the Western Washington University Planetarium website.

Throughout the remainder of 2021, you might be able to catch these space and sky events depending on your location.

The full moons and their names, according to The Old Farmer’s Almanac:

Solar and lunar eclipses, according to The Old Farmer’s Almanac:

Nov. 19: A partial eclipse of the moon, which people in North America and Hawaii will see between 1 a.m. Eastern time and 7:06 a.m. Eastern time.
Dec. 4: A total eclipse visible for those in the Falkland Islands, the southern tip of Africa, Antarctica and southeastern Australia.

When Planets Will Be Visible

Skywatchers will have multiple opportunities to spot the planets during certain mornings and evenings throughout the rest of 2021, according to the Farmer’s Almanac planetary guide.

Seeing most of these—except Neptune—with the naked eye is possible, but binoculars or a telescope will provide the best view.

Venus, our closest neighbor in the solar system, will appear in the western sky at dusk in the evenings through Dec. 31. It’s the second-brightest object in our sky, after the moon.

Mars makes its reddish appearance in the morning sky between Nov. 24 and Dec. 31, and it will be visible in the evening sky through Aug. 22.

Jupiter, the largest planet in our solar system, is the third-brightest object in our sky. Look for it in the evenings of Aug. 20 to Dec. 31—but it will be at its brightest until Sept. 2.

Saturn’s rings are only visible through a telescope, but the planet itself can still be seen with the naked eye in the evenings until December 31.

Binoculars or a telescope will help you spot the greenish glow of Uranus in the mornings through November 3 and in the evenings from Nov. 4 to Dec. 31. It will be at its brightest between Aug. 28 and Dec. 31.

And our most distant neighbor in the solar system, Neptune, will be visible through a telescope in the mornings through Sept. 13 and during the evenings Sept. 14 to Dec. 31. It will be at its brightest until Nov. 8.