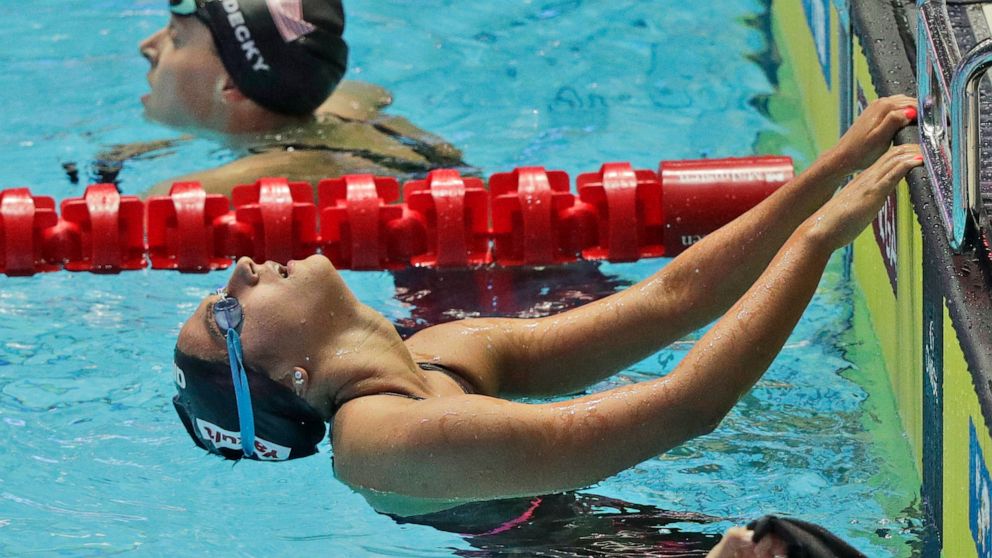 She’s also one of the few swimmers capable of challenging American standout Katie Ledecky in the longest pool races at the Tokyo Olympics.

“She’s impulsive. She’s not someone who thinks a lot about what she’s doing. She acts depending on how she feels,” says Christian Minotti, who has been coaching Quadarella since she was 12. “I try to make her think more.”

Ask Quadarella what tactics she might employ to stay close to Ledecky in the 800- and 1,500-meter freestyle races and it becomes clear that planning isn’t her priority.

“I’ve got to try to stay near but not ahead of her in the first laps. That’s for sure,” Quadarella told The Associated Press in a recent interview. “Because she starts really strong. But she also finishes really strong. So I really don’t know. We’ll see when we’re there. Every race is different.”

Looking back to the 2019 world championships, when Ledecky withdrew from the 1,500 final due to illness and Quadarella swam to gold, it’s hard to argue with Quadarella’s strategy — or lack thereof.

Especially amid a pandemic.

Quadarella was among more than 10 Italian swimmers who were quarantined in their hotel rooms for several weeks during an altitude training camp that was halted by a coronavirus outbreak toward the end of last year. Minotti left meals for Quadarella on the floor outside her room.

Making matters more complicated is Quadarella’s departure for Japan was delayed by a few days because she picked up a stomach bug.

“The way coaches operate has really been thrown upside down over the last year and a half,” Minotti says. “You’ve got to go day by day. Nobody knows what will happen tomorrow.”

For all that Quadarella has accomplished, it seems strange that these will be her first Olympics.

She’s won six gold medals at European championships and a medal of each color at the worlds, starting with a bronze in the 1,500 in 2017 — a performance that came a year after she narrowly missed out on qualifying for the 2016 Olympics at age 17.

“It’s been really long (to get to Tokyo),” Quadarella says. “It was five years (between Olympics) instead of four and last year was a complicated and tough year. … So these first Olympics mean a lot to me not just because it’s the first but also because it’s a chance for a new beginning.”

While Quadarella will likely race only the 800 and 1,500 in Tokyo, Ledecky has a much bigger program — which means the American should be competing in the final of the 200 free on the same morning of the 1,500 final.

“I really don’t think a 200 will tire Ledecky out,” Quadarella said. “Considering she’s always been able to race multiple events and always do well in them, she’s definitely going to be fresh and ready for the 1,500 — even with a 200 raced a short time earlier.”

July 28 could be a big day for Italian swimming, as Federica Pellegrini is among the medal contenders in the 200 at her fifth Olympics.

But the 32-year-old Pellegrini acknowledges her “first goal” is just to qualify for the final. Ariarne Titmus nearly broke Pellegrini’s 2009 world record in the 200 (the longest-standing women’s mark in swimming) at the Australian trials and several other challengers have also emerged recently.

“The 200 at the Olympics will definitely be the fastest ever swum” Pellegrini says. “Already at the (2019) worlds, the average speed was the fastest ever, so it’s going to be tough just to qualify.”

At the 2019 worlds in Gwangju, South Korea, Quadarella stayed with Ledecky until the very last lap of the 800 and came away with silver.

Ledecky, however, was still dealing with nausea during that race.

Can Quadarella challenge Ledecky when the American is healthy, too?

“I don’t know,” Quadarella says. “She’s a great athlete and I’m just honored to be able to compete with her. That 800 was a really emotional race and I remember it really well. We’ll see in Tokyo. But on paper, she’s faster.”