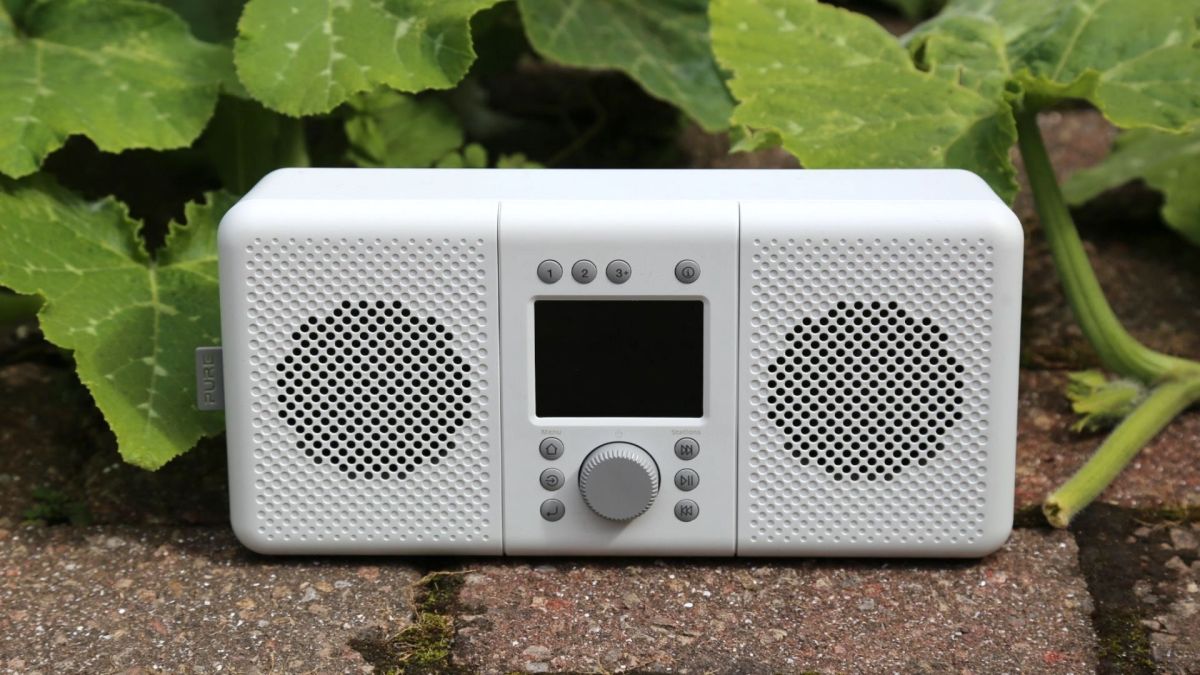 Love listening to radio, podcasts and Spotify? Then how about a product that can deliver all of them in one unit. Easily one of the best DAB radios available if judged largely on value, Pure’s Elan Connect+ offers DAB/DAB+/FM, internet radio – including scrollable lists of mainstream radio podcasts – and impressive streaming from a smartphone over Bluetooth.

The latter works better here than on most DAB radios, and the Pure Elan Connect+ is all-round easy to use. However, there are a few things to note when it comes to the hardware.

The Pure Elan Connect+ looks a little plasticky, with a build that feels slightly hollow. A press of the main menu button creates a very loud click, which can be annoying. It doesn’t have the audio capabilities to pump out refined and/or powerful tunes; we’re talking voice radio and background music here.

So why do we love the Pure Elan Connect+? Value, plain and simple. It’s an easy-to-use DAB radio, Bluetooth streamer and podcast-player in one.

It features a large, cute colour display. It can work off four AA batteries. At just 82mm deep, it will easily slide onto any kitchen worktop or bookshelf without dominating – and it’s powered by a micro-USB cable, which saves on having to use a big heavy powerpack (although why not USB-C?).

It’s far from perfect, then, and its utilitarian design will be off-putting to some – but the Pure Elan Connect+ seems to us to be a great value all-in-one for kitchens, bathrooms and the occasional patio, too.

Originally launched in October 2020, the Pure Elan Connect+ costs £99.99 from the manufacturer’s website, but keep an eye out for deals and discounts online.

All products feature colour displays, are powered by a micro-USB cable and/or four AA batteries, and come in either Stone Grey or Charcoal finishes.

The Pure Elan Connect+ isn’t going to win any awards for its design. It’s far from ugly, but compared to the faux leather and wood panelling that features in the design of rival DABs, the Stone Grey (an off-white) or Charcoal-coloured plastic chassis is utilitarian.

That comes with advantages, however – not least a 643g weight (around 770g, if you insert the four AA batteries to make it portable). We also liked its unusually small depth; measuring 115 x 82 x 247mm, it’s far less dominating on a kitchen workshop than some rival DABs.

On the front of the Pure Elan Connect+ you’ll find a simple setup: three preset buttons above the 2.4-inch colour screen, and six buttons below. The buttons below the panel are arranged either side of a click-wheel that can be turned to scroll through menus and adjust volume, and pressed to select things. However, the click-wheel makes a loud and hollow noise that quickly becomes annoying.

On the rear of the Pure Elan Connect+ is a telescopic aerial that unfurls to 52cm, a 3.5mm headphones jack, battery compartment and a micro-USB slot for attaching the product to a power source. There’s a 1m micro-USB cable included (a little old-school given the rise of USB-C), but no USB plug; you’ll need to supply your own.

Initial setup is a bit fiddly. A setup wizard first presented a weblink to take you through the privacy policy, which self-scrolls extremely slowly. Following this are rudimentary on-screen menus for getting the Pure Elan Connect+ online.

The Pure Elan Connect+’s 2.4-inch display may be colour, but it isn’t a touchscreen. There’s no app, so it connects to your home’s Wi-Fi network via the WPS button on a Wi-Fi router. Easy if you know what you’re doing – and it worked fine in our test – but this isn’t ideal if you’re gifting this product to someone who may be less tech-savvy.

The graphical presentation on the unit’s screen is decent, with the title of the podcast sitting over a small colour icon and a timeline showing the duration of the episode and how far you’re into it. It’s possible to go back and scan through all available podcasts while you continue to listen – although there’s only space for five titles to be listed simultaneously on the small screen, with only enough room for about 28 characters.

It’s a bit of a squeeze, then, but we found it relatively easy to locate and play podcasts, even if the constant clicking on the wheel did become annoying. Crucially, it’s easier to find a mainstream podcast on the Pure Elan Connect+ than messing around with a smartphone.

Note that there is a home button, but it merely takes you to the hub screen for the source you’re already on. You have to hit the source button to reach the ‘real’ home screen that hosts four icons: internet radio (a globe), DAB (the DAB logo), FM radio (an image of a small radio) or Bluetooth (the Bluetooth logo).

We selected DAB and it immediately tuned-in dozens of stations, presenting them in a linear list that was easy to scan through. Each channel features a colourful display that shows an icon and scrolling text, although the text is reduced to a size where most of it can be presented at once.

With Bluetooth selected, the display flashes-up ‘Bluetooth discoverable’ on its screen, and it’s then a cinch to pair from a smartphone.

The Pure Elan Connect+ isn’t really designed for parties or even BBQs, although it does a reasonable job outdoors. However, even with basic stereo imaging from its two speakers, the 3W units don’t provide much power.

You can make adjustments to the sound via the ‘My EQ’ area, where you can play with the bass and treble. There’s a ‘loudness’ option, too – this adds some depth, but also some muffle. That equaliser also presents presets, including flat, jazz, rock, movie, classic, pop and news. None were particularly stand-out, although across all sources we found sound quality was more than acceptable.

Perhaps the clearest sound comes via Bluetooth streaming, which was a surprise (it’s so often the low point of DAB radios attempting to also be streaming devices). So if you mainly listen to podcasts that aren’t accessible via internet radio, then this unit could work well for you.

Switch back to DAB and the volume remains at the same volume as you had it on Bluetooth streaming, which is another rarity in the DAB world.

Should I buy the Pure Elan Connect+?

You want a lot of bang for your buckThe Pure Elan Connect+ may not be the very best-sounding DAB in the world, but with DAB/DAB+/FM, internet radio and a slick Bluetooth streaming option, there isn’t much this little unit can’t do.

You insist on impeccable sound qualityThe 3W digital amplifier inside this unit is pretty basic, supplying enough audio prowess for voice radio, podcasts and background music, but not much refinement.

You want something beautiful The Pure Elan Connect+ is a utilitarian kind of product; it’s affordable, does the basics and looks inoffensive. However, if you’re not a fan of stark plastic and buttons that make slightly hollow noises when you press them, look away now.