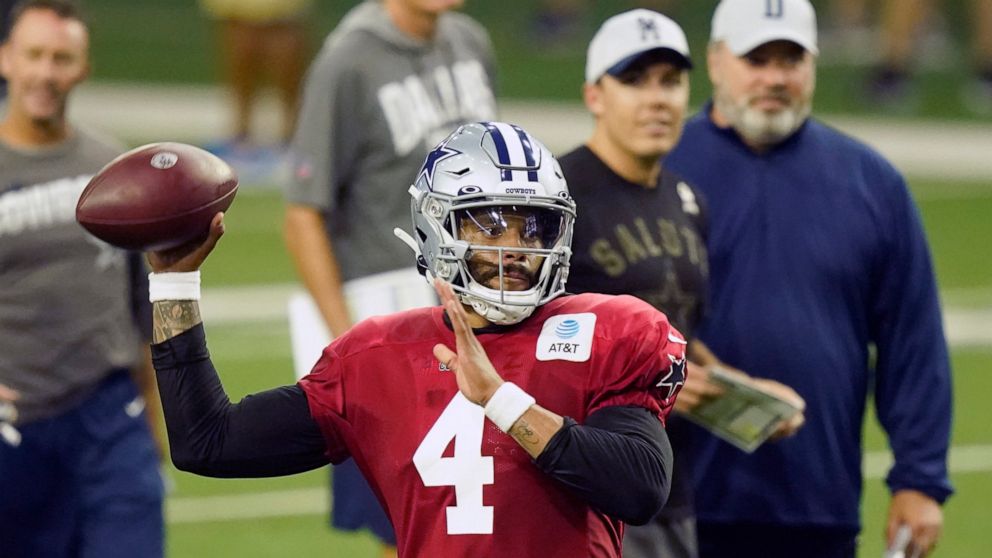 FRISCO, Texas — Dak Prescott’s only chance to play in the preseason will be this week, and the star quarterback of the Dallas Cowboys still isn’t fully cleared after pulling himself from practice at training camp in California on July 28 with a right shoulder injury.

There’s a chance Prescott will go into the opener against Super Bowl champion Tampa Bay without having taken a snap in a game since the severe ankle injury that ended his 2020 season in Week 5.

Before the club’s first camp practice at team headquarters Monday night after three weeks on the West Coast, coach Mike McCarthy said Prescott won’t play in the preseason if he doesn’t get into the home exhibition opener against Houston on Saturday night.

“We’ll see how the week goes, but there’s no urgency from my perspective to see Dak play against Houston,” McCarthy said. “This is more about we don’t want to create a setback possibly.”

Prescott, who signed a club record $160 million, four-year contract in March, is throwing more in practice than he did for the first two weeks after feeling pain in his throwing shoulder while warming up for practice.

The 2016 NFL Offensive Rookie of the Year made about two dozen throws during individual work at the team’s indoor practice facility before sitting out the 11-on-11 work again.

Prescott had his second MRI over the weekend, and the injury is progressing as planned after the Cowboys consulted the medical staffs of the New York Yankees and Texas Rangers and followed their recommendation of rest.

Before the Cowboys left California, Prescott said he hoped to play against the Texans. That appeared less likely with him still watching team drills Monday.

“I’m a go-go-go guy. I always want to be in the action,” Prescott said last week. “I think the more reps are better, better for me. But something like this you can’t stress it too fast. It’s just the risk versus the reward at this point, and I’ve got to know what I’m playing for, and that’s to be ready for this season.”

Prescott said doctors believe the injury “was a little bit of a freak thing,” although the two-time Pro Bowler also says it could have been an aggressive plan with throwing, including in the early stages of rehab from the compound fracture and dislocation of his ankle that led to two surgeries.

The first camp practice for fans at home in two years included the return of receiver Amari Cooper, who had offseason ankle surgery. Defensive end DeMarcus Lawrence joined Cooper on the physically unable to perform list at the start of camp and still hasn’t worked back into team drills.