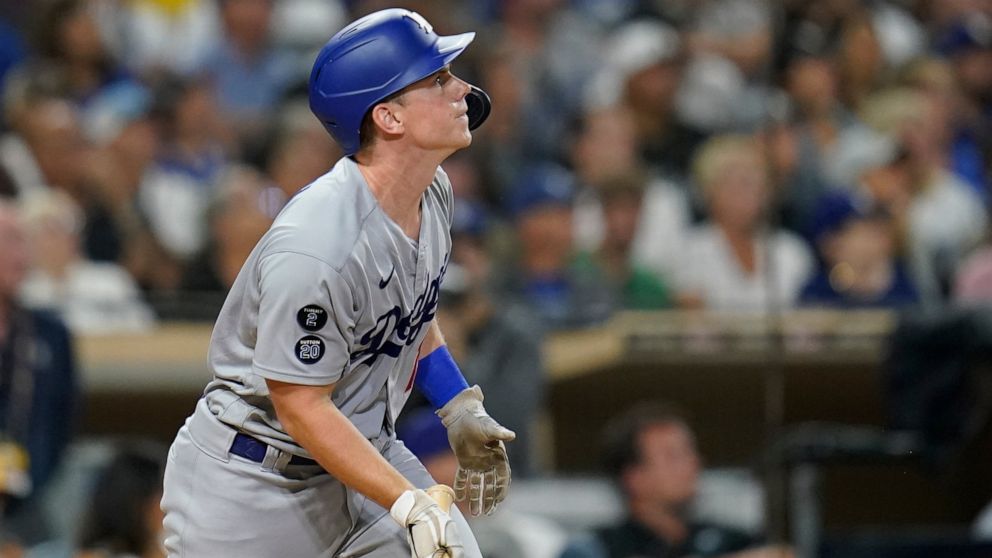 No game had lasted longer than 13 innings since MLB began putting an automatic runner on second base to start extra innings during the shortened 2020 season.

Pollock’s 16th homer came off rookie reliever Daniel Camarena (0-1), the ninth Padres pitcher. The Dodgers used 10, including winner Corey Knebel (4-0) and Shane Greene, who worked the 16th for his first save.

Greene was the 47th player of 52 on the two active rosters to appear in the game.

Pollock also had a big game in a 5-2 win in the series opener Tuesday night, robbing Manny Machado of a two-run homer and hitting a two-run single.

Pinch-hitter Billy McKinney and Trea Turner gave the Dodgers a 3-1 lead with consecutive RBI singles in the 15th.

Fernando Tatis Jr. tied it with a two-run homer to right field off Knebel in the bottom half, his NL-leading 35th.

Tatis’ home run was just the fourth hit for the Padres and their first since the fifth. It came an inning after the 14th-inning stretch.

The Dodgers won for the 11th time in 12 games. The Padres, who wasted a brilliant start by Blake Snell, have lost three straight and 11 of 13.

There were 11 intentional walks, eight by the Dodgers — most by a big league team since 1955.

Snell and Dodgers ace Walker Buehler were both outstanding but were long gone by the time the game ended.

The Padres ran out of position players in extra innings and had to have pitchers Ryan Weathers and Joe Musgrove pinch-hit. Musgrove struck out with the bases loaded to end the 11th and Weathers hit into a force to end the 13th. Each time, Dodgers manager Dave Roberts had Machado and Jake Cronenworth intentionally walked to load the bases with two outs.

Each team had chances to win it earlier in extras.

The Dodgers had two runners thrown out in rundowns between third and home, Max Muncy in the 12th and Will Smith in the 13th. San Diego’s Austin Adams got out of a bases-loaded jam in the 12th when Smith flied out to center.

The Padres got Kim Ha-seong to third base with one out in the 10th but couldn’t bring him in.

Dodgers closer Kenley Jansen pitched a perfect ninth to keep the score tied at 1 and send it into extras after fanning Austin Nola for his 1,000th career strikeout.

Snell kept the Dodgers in check until Smith homered to left-center on the lefty’s 116th pitch to tie the game at 1 with one out in the eighth. After notching his 10th strikeout, against Cody Bellinger, Snell got the hook from manager Jayce Tingler. Daniel Hudson came on and struck out pinch-hitter Albert Pujols.

Snell threw a career-high 122 pitches in 7 2/3 innings, the longest outing of his career. He retired the first 11 batters before Justin Turner singled. The lefty allowed three hits and walked none. It was his first outing without issuing a walk since the fateful Game 6 of the 2020 World Series, when Tampa Bay manager Kevin Cash pulled him with a 1-0 lead against the Dodgers. Los Angeles rallied to win the game and the Series.

Snell’s terrific start came two days after the Padres fired pitching coach Larry Rothschild. The lefty, obtained in a trade with Tampa Bay just after Christmas, has been up and down all season.

Buehler also pitched brilliantly, allowing an unearned run and three hits in 6 2/3 innings while striking out eight and walking one. He was pulled after issuing the game’s first walk, to Wil Myers with two outs in the seventh, and replaced by Joe Kelly, who came off the injured list before the game.

A night after Pollock robbed Machado of a two-run homer, the Padres returned the favor. Myers made a spectacular leaping grab at the left-field fence to deny Seager of an opposite-field shot in the second, and Gold Glover Trent Grisham caught Muncy’s smash at the top of the fence in the fourth.

Myers beat out a chopper down the third-base line for an RBI infield single with two outs in the second.

Dodgers: Activated Kelly from the injured list and optioned LHP Victor González to Triple-A Oklahoma City. The Dodgers never disclosed why Kelly missed 14 games. … OF Mookie Betts (hip) is expected to be activated for the series finale Thursday night.

Dodgers RHP Max Scherzer (11-4, 2.65 ERA) will try to go 8-0 over 13 starts when he opposes RHP Yu Darvish (7-7, 3.70), who is scheduled to come off the injured list. Scherzer, obtained from Washington at the trade deadline, hasn’t lost since May 30 against Milwaukee. He has allowed 11 runs in 10 2/3 innings in two starts against San Diego this season, both no-decisions.