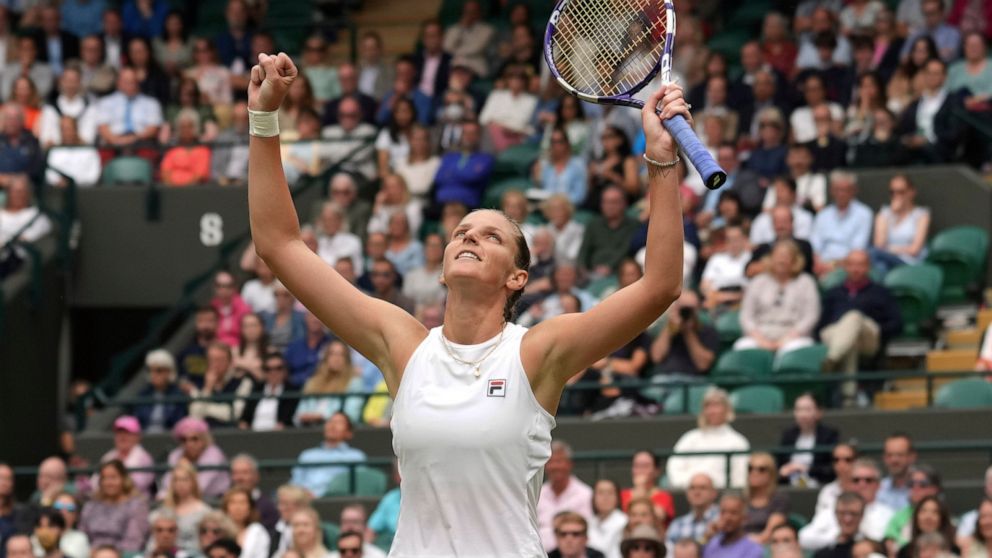 WIMBLEDON, England — Karolina Pliskova’s tennis success is predicated on a big serve, which rewards her with plenty of easy points and can get her out of trouble when needed.

Thanks largely to that stroke, she is headed to the Wimbledon semifinals for the first time.

Pliskova claimed 24 of 26 points on her serve in one stretch, hit eight aces and saved the only three break chances she faced on the way to a 6-2, 6-2 victory over Viktorija Golubic on Tuesday at the All England Club.

“I feel like I’m improving with every match. … Everything today was working quite well,” said Pliskova, the 2016 U.S. Open runner-up and a former No. 1-ranked player. “I just feel my game is good the last two weeks, even in the practices.”

She averaged 106.5 mph on her first serves, 20.5 mph faster than Golubic, with the retractable roof at No. 1 Court shut because of rain.

The crowd there — and at Centre Court — was allowed to be at full capacity Tuesday for the first time during the tournament after COVID-19 restrictions placed a 50% cap on attendance when the fortnight began.

“Roger, what he does, the way he plays, the titles he has won — he has inspired so many people,” said Hurkacz, a 24-year-old from Poland. “It’s going to be fun. I’ll be hoping to get a little bit of support.”

Pliskova has been broken only three times through five matches so far and she has not dropped a set. She also hasn’t played anyone ranked better than 47th yet, but will meet either No. 2 seed Aryna Sabalenka or No. 21 Ons Jabeur for a berth in the final.

The other women’s quarterfinals, scheduled for later Tuesday, were No. 1 Ash Barty vs. Ajla Tomljanovic, and 2018 champion Angelique Kerber vs. No. 19 Karolina Muchova.

This is the first time in the Open era, which began in 1968, that there were six first-time women’s quarterfinalists at the All England Club. That group included both the eighth-seeded Pliskova, a 29-year-old from the Czech Republic, and the unseeded Golubic, a 28-year-old from Switzerland.

Pliskova served first and got pushed to deuce in the opening game, when she was called for a second-serve foot fault. But from there, she kept Golubic at a safe distance, dropping a total of two points in her following half-dozen service games combined.

Only with Pliskova up a set and a break at 4-2 in the second did the 66th-ranked Golubic, who uses a one-handed backhand, make a bit of a stand. In a game that lasted more than 10 minutes and included Golubic’s full trio of break points — the first set up by another foot-fault double-fault — Pliskova was put to the test.

She erased the first break point with a 113 mph service winner, the second with a 101 mph ace and the last with a quick-strike forehand winner set up by a 115 mph serve.

This is not meant to say that Pliskova can do nothing but serve. She did plenty else to accrue a 28-10 edge in winners, including volleying her way to grab 17 of the 21 points that she finished at the net.