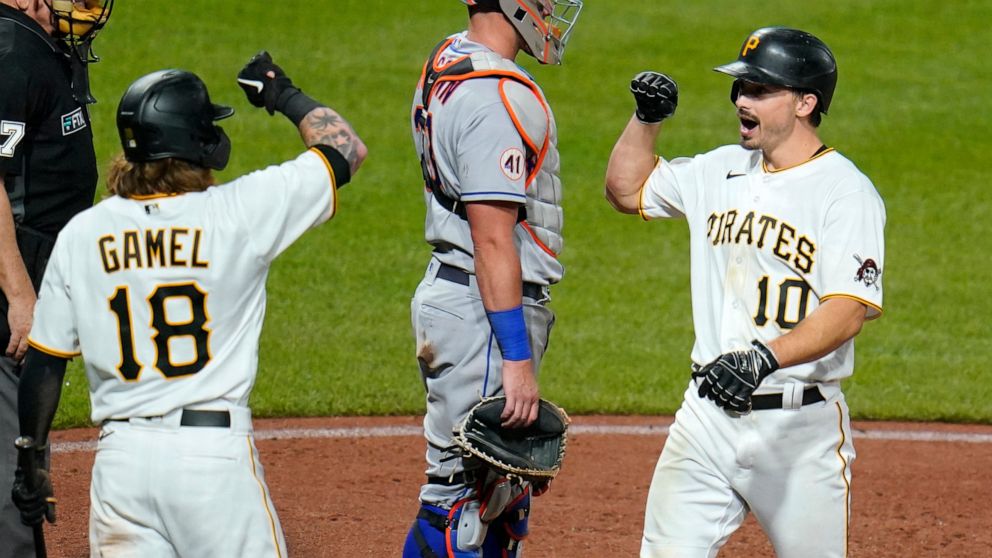 PITTSBURGH — Francisco Lindor left injured moments before Marcus Stroman and his New York Mets teammates got into a heated shoving match with Pittsburgh during the Pirates’ rain-delayed 4-1 victory Friday night.

Coming off their first All-Star appearances, Bryan Reynolds homered and Adam Frazier hit a two-run single to lead the Pirates in a game delayed 39 minutes by showers in the bottom of the second inning.

Lindor exited in the fifth with soreness on his right side. Mets manager Luis Rojas had no further update following the game other than to say the star shortstop would be examined in the morning.

Lindor winced after grounding out to second base in the fifth. The four-time All-Star took a few steps out of the batter’s box but then peeled off toward the Mets’ dugout on the first base side.

“You never want to lose anyone in your lineup, but especially Francisco Lindor,” Mets catcher James McCann said. “That’s a guy you hope everything is OK and he’s back out there soon.”

In the bottom half, tempers flared and the benches cleared after Stroman jumped high in the air when John Nogowski lined out to first base to end the inning.

Nogowski began shouting and pointing at the New York starter, who walked toward him and barked back. It appeared no punches were thrown during a large scrum on the field, and there were no ejections.

McCann said the dustup was a “miscommunication” and that Stroman was initially upset with plate umpire Larry Vanover. Stroman, though, called Nogowski “a clown” following the game.

“That was uncalled for,” Stroman said. “I’ll never let any man talk to me like that. I’m not scared of anyone. Hitters get on first base and do the macarena when they get a broken-bat single. I don’t say anything. If he has a problem with it, I’m right here. I’m 60 feet, 6 inches away.”

Nogowski called it “no big deal.”

“That was a huge out for him to keep his team in the game,” Nogowski said. “Reynolds hit a big home run. Frazier had his big hit. That’s the focus for me.”

Reynolds’ homer came in the seventh and pushed the lead to 4-1. It was his 17th of the season, setting a career high.

Frazier’s hit in the second opened the scoring. He and Reynolds became the first Pirates teammates to start in an All-Star Game on Tuesday since Barry Bonds and Bobby Bonilla in 1992.

Chad Kuhl (3-5) got the win despite issuing five walks in five innings. He allowed one unearned run and two hits while striking out three.

“You just have to keep trying to execute pitches even when you’re walking guys,” Kuhl said.

NL East-leading New York managed only three hits against the Pirates, who are last in the NL Central. The teams split four games last weekend in New York.

Stroman (6-8) gave up just the two runs on Frazier’s single in five innings while scattering eight hits. He struck out two and walked none.

Richard Rodriguez pitched a scoreless ninth for his 13th save in 15 chances.

Wilmer Difo also homered for Pittsburgh, a drive to the back of the right field stands in the sixth off Drew Smith that made it 3-1. Difo, Reynolds and Jacob Stallings each had two hits for the Pirates.

The Mets got their run in the fourth when Pete Alonso walked and scored on Jonathan Villar’s groundout. After winning his second consecutive All-Star Home Run Derby on Monday night, Alonso reached base four times on a double and three walks.

The Mets have yet to determine when ace Jacob deGrom will make his next start.

He threw a light bullpen before the game, which would line him up to pitch Monday at Cincinnati. However, the Mets have not announced a starter for Sunday’s series finale with the Pirates and deGrom could get the nod.

DeGrom is 7-2 with a major league-leading 1.08 ERA in 15 starts this season despite being hampered by multiple ailments. He last pitched July 7 against Milwaukee.

“We want him to take the time off from a medical standpoint to come in fresher for the second half,” Rojas said.

Mets: Activated INF J.D. Davis from the injured list and designated OF Billy McKinney for assignment. Davis had been out since May 2 with a hand injury.

Rojas has no set plan on how he will divide playing time at third base between Davis and Villar, who started there Friday.

“When I get the opportunity, I’ll bang,” said Davis, who struck out in the seventh as a pinch-hitter.

McKinney hit .220 with five home runs in 39 games after being acquired from Milwaukee on May 26 in a trade.

LHP Stephen Tarpley was released. He allowed two runs without getting an out in his lone relief appearance.

Pirates: INF/OF Philip Evans was activated from the concussion IL and RHP Nick Mears was recalled from Triple-A Indianapolis, while INF/OF Cole Tucker was optioned to Indianapolis. Evans had been sidelined since July 6.

The Pirates had a roster spot open after placing LHP Sam Howard (right oblique strain) on the injured list Tuesday.

Mets: RHP Carlos Carrasco (strained right hamstring) is tentatively scheduled to make a rehab start Tuesday for a farm club to be determined. On the IL since the beginning of the season, Carrasco pitched two scoreless innings for High-A Brooklyn on Thursday in his first rehab outing, allowing one hit and striking out two. … RHP Corey Oswalt (right hamstring strain) is rehabbing at the spring training facility in Port St. Lucie, Florida, and had an injection to reduce swelling in his leg.

It will be a matchup of rookie right-handers Saturday night when the Mets’ Tylor Megill (0-0, 3.50 ERA) faces Wil Crowe (1-5, 6.05). Megill will be making his fifth career start. Crowe has given up a run in the first or second inning in 11 of his 12 starts this season.