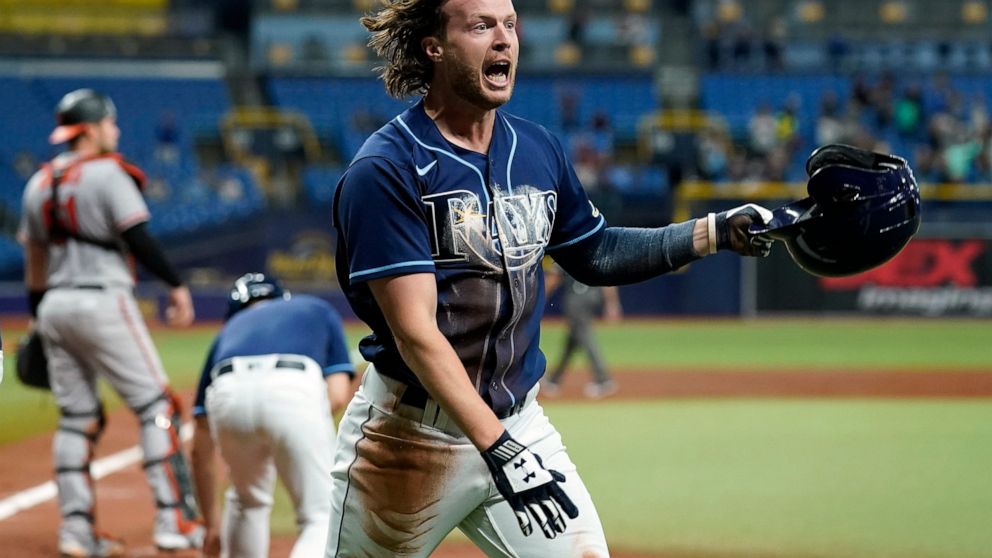 Kevin Kiermaier and Mike Brosseau also homered for the Rays, who are 12-1 against the Orioles this season. Tampa Bay has outscored Baltimore 103-51, and has had nine runs or more in eight of the games.

McHugh struck out one over two perfect innings. He has not allowed an earned run in 16 consecutive appearances, spanning a team-record 32 straight innings.

Phillips sent a leadoff drive in the sixth off Paul Fry to the left-center field wall that bounded past center fielder Cedric Mullins and was retrieved by left fielder D.J.Stewart. The speedster ended his dash around the bases with a head-first drive to beat a relay throw at the plate.

The announced crowd for the opener of a seven-game homestand for the Rays was just 5,460.

Lowe hit his second homer of the game and career-high 28th, a two-run shot off Fry later in the sixth to put the Rays ahead 8-1.

Austin Meadows put the Rays up 2-1 with a two-run triple off Matt Harvey (6-12) in the fourth. Meadows was thrown out at the plate when Harvey came off the mound to field Brosseau’s chopper barehanded and flip the ball to catcher Austin Wynns.

Kiermaier and Lowe had solo drives during a three-run fifth to make it 5-1.

Brosseau homered in the seventh.

Harvey, who entered 3-1 with a 1.65 ERA in five starts since the All-Star break, allowed five runs and five hits in 4 ⅔ innings.

After fouling a pair of balls off his legs, Baltimore’s Trey Mancini had an RBI double in the eighth.

Baltimore had runners on first and third with no outs in the third, but scored just once on Mullins’ sacrifice bunt.

The Rays signed RHP David Robertson to a major league contract, and will have him report to Triple-A Durham. The 36-year old reliever pitched for the silver-medal winning USA team in the Tokyo Olympics.

OF Colton Cowser, taken fifth overall in this year’s draft by Baltimore, was promoted to Class-A Delmarva from the rookie-level FCL, where he went 11 for 22 with a homer and eight RBIs in seven games.

Orioles: OF Ryan Mountcastle (concussion) may be back in a couple days.