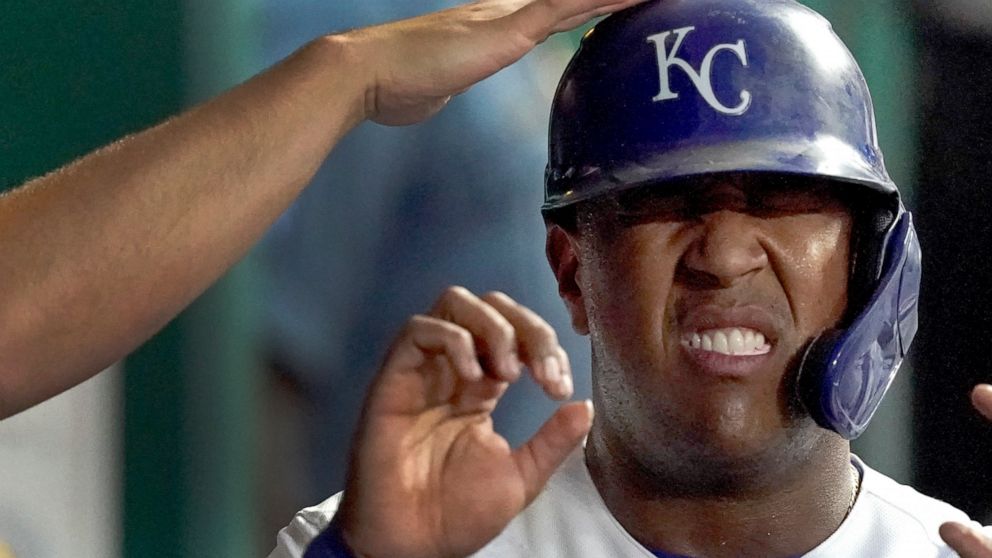 Salvador Perez drove in the go-ahead runs with a two-out single in the eighth inning, helping the struggling Kansas City Royals to a back-and-forth 7-6 victory over the AL West-leading Houston Astros

KANSAS CITY, Mo. — The Kansas City Royals had shown very little fight in a three-game sweep by the St. Louis Cardinals over the weekend.

They showed about three games’ worth of it Monday night.

After answering about every time the Houston Astros tied the game or pulled ahead, Salvador Perez capped the back-and-forth affair with a two-out single in the eighth inning that lifted the Royals to a 7-6 victory over the AL West leaders.

“We just played three games that I felt were very uncharacteristic. We didn’t display any kind of whatever,” Royals manager Mike Matheny said. “It wasn’t like us, and to see them come out — we talk about teams having short memories and it’s pretty amazing how these guys forget about the last one and come back and keep going.”

Whit Merrifield and Nicky Lopez produced back-to-back two-out singles off Astros reliever Yimi Garcia (3-8) before Perez came to the plate. The big catcher got just enough of a slider off the handle of the bat to drop it down the right-field line, allowing Merrifield and Lopez to score the go-ahead runs — and both would be important.

Scott Barlow (5-3), who who unable to preserve the lead in the eighth when he allowed an inherited runner to score, also gave up a homer to Jason Castro in the ninth. But he got a spectacular defensive play from Lopez at second base to retire Jake Meyers, and Jose Altuve popped out to end the game along with Kansas City’s four-game losing streak.

“Just trying to get on base, keep it moving and turn it over to Salvy,” said Lopez, who also stole three bases in the game.

“I mean, that’s their game. That’s the tendency of the Royals as long as I can remember,” Astros manager Dusty Baker said. “Not only are they aggressive, they have speed. They’re leading the world in stolen bases.”

Aledmys Diaz and Carlos Correa went deep for the Astros, whose bullpen had put together a sterling 1.85 ERA since the trade deadline. But reliever Ryne Stanek coughed up a run in a messy seventh inning that included a walk, a single and a hit batter, and Garcia allowed three straight hits in the eighth to take the loss.

Stolen bases aside, both teams had trouble on the base paths.

The Royals had runners thrown out at the plate in each of the first two innings. And in the fifth, Carlos Santana was caught wandering off second on a comebacker to the pitcher.

That wasn’t the end of the teams mimicking each other.

Correa broke a 3-all deadlock with his shot to left leading off the sixth, only for Dozier to answer with his home run in the bottom half. And when Lopez swiped two bags after a walk to manufacture a go-ahead run for Kansas City in the seventh, pinch hitter Taylor Jones doubled and scored on Diaz’s single to knot the game again.

Royals: SS Adalberto Mondesi has backed off left-handed swings after some scar tissue from a previous oblique injury was found on that side. Mondesi is still doing some fielding work, throwing and swinging right-handed as he tries to come back from his third injured list stint of the season. His strained left oblique landed him on the IL on June 21.

“There’s some deep frustration. This guy wants to play,” Matheny said. “That’s the thing that gets lost in this. As much as we want to see him out there, he wants to be out here more.”

The Royals placed RHP Greg Holland on the IL with a right shoulder impingement and recalled RHP Joel Payamps from Triple-A Omaha. Holland is 2-5 with a 5.79 ERA and seven saves in 50 appearances.

“It’s been something he’s been trying to fight through,” Matheny said. “We weren’t gaining ground.”

McCormick and Meyers flip-flopped what have become their normal spots in the outfield. McCormick moved to right field for the 15th time this season while Meyers made his first career start in center.

“I just felt like it was better for McCormick to play right and Meyers to play center,” Baker said.