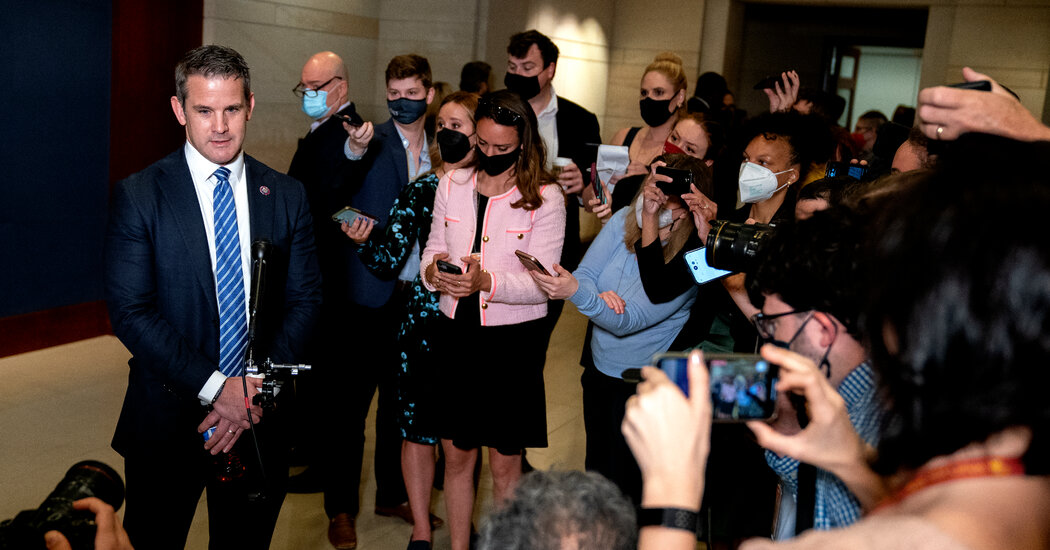 Mr. Kinzinger, who broke with his party to support investigating the Jan. 6 assault, has made clear for weeks that he would be willing to serve. But Democrats began more seriously weighing the possibility of naming him after the House Republican leader, Kevin McCarthy of California, said on Wednesday that Republicans would boycott the investigation because Ms. Pelosi rejected two of the five members he had recommended.

“We’ll see,” Ms. Pelosi said on Thursday, when asked about the possibility of going around Mr. McCarthy to directly appoint additional Republican members. “There are some members that would like to be on it.”

Separately, Ms. Pelosi was seriously considering naming Denver Riggleman, a former Republican congressman from Virginia, as a senior adviser to the committee, according to the officials, who requested anonymity to speak frankly about the deliberations. Mr. Riggleman is a former a former Air Force intelligence officer, who emerged from a G.O.P. primary lass last year determined to try to fight disinformation, like QAnon, from overtaking his party.

Because the investigation is being handled by a select committee, Ms. Pelosi has the final say over its membership, in consultation with the Republican leader. She has already given one of the eight seats normally reserved for the majority party to Representative Liz Cheney of Wyoming, a former member of Republican leadership who was ousted for criticizing Donald J. Trump and her party for trying to undermine the 2020 election results. The addition of Mr. Kinzinger would make the panel more bipartisan and better ensure at least some Republicans support its work.

Like Ms. Cheney, Mr. Kinzinger has been unsparing in his criticisms of Mr. Trump and his own party after a mob of pro-Trump supporters, egged on by the president, stormed the Capitol and tried to stop Congress from finalizing President Biden’s victory. He has argued that unless Republicans seriously reckon with the former president’s trail of lies about a stolen election and the dangerous forces it unleashed in the country, they risk undermining American democracy.

Representative Bennie Thompson, the Mississippi Democrat who will lead the committee, confirmed to CNN on Thursday that Mr. Kinzinger was being considered. He said the 43-year-old Illinois Republican and Air Force veteran would be a “welcome addition.” (A previous version of this item misspelled Mr. Thompson’s surname.)

Democrats have discussed the possibility of adding other Republicans whom they trust to take the committee’s work seriously. But several conceded that Mr. Kinzinger may be the only one other than Ms. Cheney willing to buck Mr. McCarthy, who suggested in recent weeks that any Republican member who accepted an appointment from Ms. Pelosi would lose their seats on other committees.

The latest spat over its members began this week when Mr. McCarthy recommended the appointment of five Republicans, including two staunch allies of Mr. Trump who supported the bid to overturn the election results in Congress on Jan. 6 and equated the riot to racial justice protests.

Normally, the speaker would simply rubber stamp the choices of a minority leader for such a committee. But Ms. Pelosi said she could not allow the two Trump loyalists, Representatives Jim Jordan of Ohio and Jim Banks of Indiana, to serve. Mr. McCarthy responded by saying Republicans would not participate.

On Thursday, Ms. Pelosi made clear she would not reverse course, citing statements by the two Republicans dismissing the investigation as “impeachment round three” and suggesting it was Democrats who ought to be scrutinized for not properly defending the Capitol.

“Nobody is saying it should all be on the same point of view going on the committee,” Ms. Pelosi said. “But when statements are ridiculous and fall into the realm of ‘You must be kidding,’ there is no way that they are going to be on the committee.”

Democrats also began locking in the committee’s professional staff on Thursday, turning to seasoned government investigators. They announced that David B. Buckley, a former inspector general for the C.I.A., would lead the staff. Kristin Amerling, a longtime congressional investigator who scrutinized the Iraq War and the federal response to Hurricane Katrina, will be his deputy; Tim Mulvey, a former House and State Department aide, will be the committee’s chief spokesman.