Part I – Dumbing Down Students 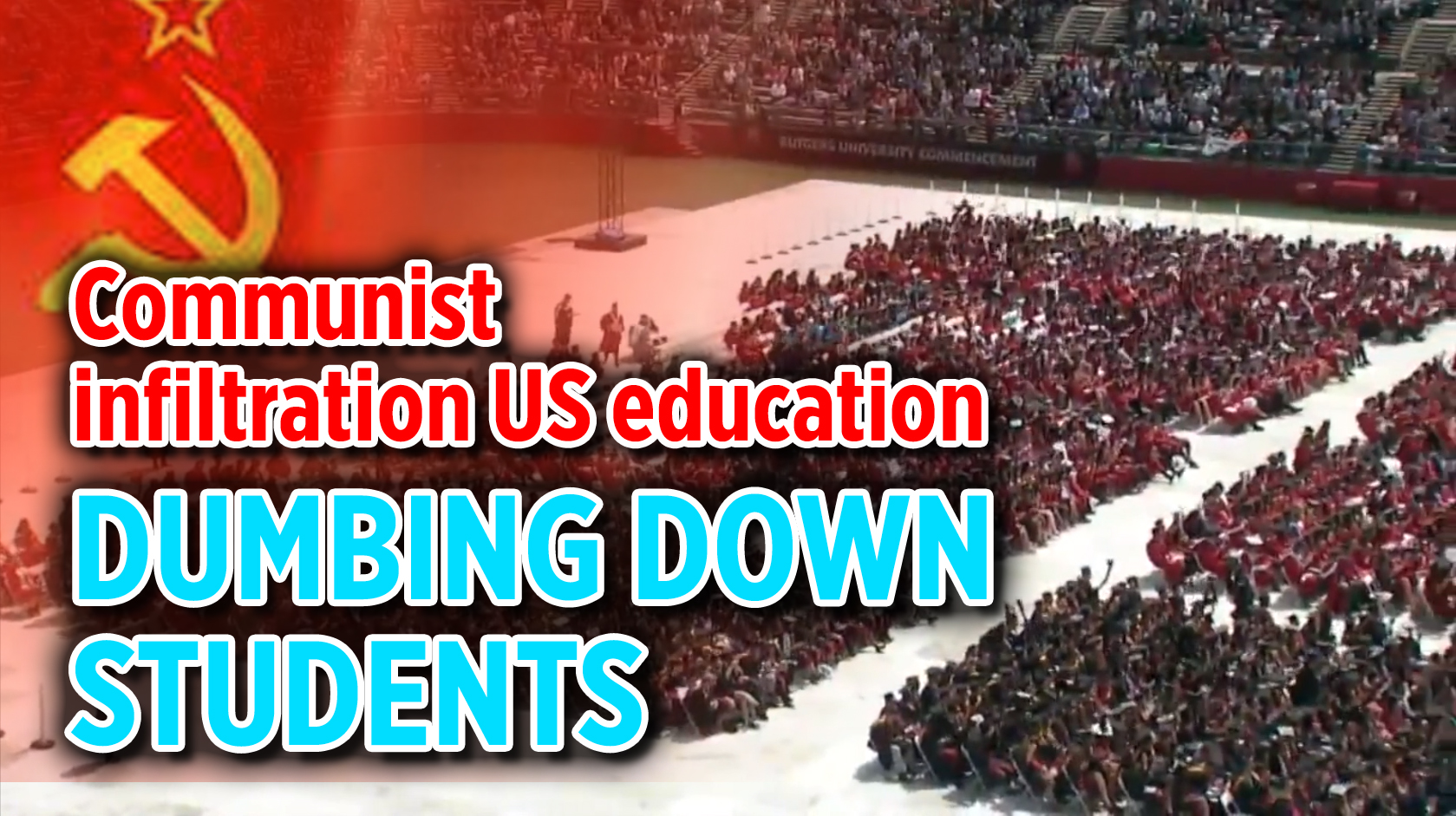 Education plays an important role in nurturing moral character, and cultivating people’s wisdom generation after generation. When people’s moral standards and knowledge are lowered, it will take just a few generations for the country to lose its advances and its competitiveness.

The United States is the world’s number one country in many aspects, including economics, military, and technology. Therefore, the communists have made tremendous effort to corrupt the United States, targeting it economically, militarily, and technologically, as well as attempting to ruin the quality of its education.

We will concentrate in this video on the topic of how communists have successfully infiltrated U.S. education. We will focus on efforts in “dumbing down students” first and deliberate on how the communist ideology is “ruining students’ morality” in the next video.

As we mentioned in a previous video, “Corrupting mass media: A communist goal to defeat the US,” communism has many variations and mutations. It used slaughter and violence to destroy those who refused to follow it in the East. However, in the West, it takes recourse in the language of “science” and “progress,” and the slogans of “democracy,” “equality,” “political correctness,” and “social justice” to infiltrate education, media, the arts, and legal system, bringing people under its banner without their awareness.

Before we go into detail, let’s first look at the goals the communists set up to ruin the U.S. education system and younger generations, which were listed in Cleon Skousen’s 1958 book “The Naked Communist.”

Goal #17. Get control of the schools. Use them as transmission belts for socialism and current Communist propaganda. Soften the curriculum. Get control of teachers’ associations. Put the party line in textbooks.

Goal #19. Use student riots to foment public protests against programs or organizations which are under Communist attack.

Over the last several decades, the U.S. has been experiencing an accelerated decline in educational standards and is at the bottom of the list ranking with other developed countries, especially in primary and secondary education performance. Several surveys conducted internationally by the Organization for Economic Co-operation and Development in 2018, designed to measure how successful young students are in math, reading, and science, clearly showed that the U.S. ranked 25th worldwide—well below other developed countries.

In reacting to these scores, then Secretary of Education Betsy DeVos said in a statement, “We are being outpaced not only by our global competitors like China and Russia, but also by countries like Estonia, Finland, and Canada.”

In goal #17 of the communists, “Soften the curriculum,” has been a very effective way to make American students perform poorly.

In the name of “social justice,” and “being fair” to low-income students and disadvantaged groups, under the name of the “progressiveness,” there have been many distracting courses and much content added to the curriculum, such as safe sex education or drug and death prevention. But this inevitably squeezed out and watered down traditional courses and content.

John Taylor Gatto, a senior teacher and educational researcher in New York City, wrote in 1983, “Pick up a fifth-grade math or rhetoric textbook from 1850 and you’ll see that the texts were pitched then on what would today be considered college level.”

The 1960s’ anti-culture movements not only corrupted U.S. culture, which was shown in our previous video “Anti-culture movement in the 1960s,” but also accelerated the decline of the U.S. education systems. Students were distracted by so many things—drugs, sex liberation, self-indulgency, hip-hop, and rock and roll—that it made it difficult for them to concentrate on traditional education and studies.

From 1963 to 1980, students’ SAT scores declined dramatically, with the average verbal score dropping by more than 50 points, and the average math score dropping by nearly 40 points. The Department of Education summarized these alarming facts in their 1983 April issue—”A Nation at Risk,” which stated: “Many 17-year-olds do not possess the ‘higher order’ intellectual skills we should expect of them. Nearly 40 percent cannot draw inferences from written material; only one-fifth can write a persuasive essay; and only one-third can solve a mathematics problem requiring several steps.”

Even worse, in order to avoid making the American education system look bad, in 1994, the College Board redefined the scores of the SAT. When the modern form of the SAT began to be adopted in 1941, the average score of the language exam was 500 points (top marks are 800 points). By the 1990s, the average score had dropped to 424 points; the College Board redefined 424 as 500 points.

Charles Krauthammer, a Pulitzer Prize winner from The Washington Post, published an article in the Chicago Tribune in 1994. In it, he asks why the average SAT scores have slid 76 points in verbal and 22 points in math since 1941. He received an answer from the College Board which said “most infrequent users of the SAT expect the average to be about 500 … They think a 424 verbal is below average, whereas in fact it is today’s sorry mean. We will now cure them of this debilitating misapprehension by ‘recentering’: By decree, every 424 turns into a cool 500.”

In the last several decades, many people including U.S. presidents wanted to do something to revert the trend of decline, namely, “back-to-basics,” “national standards,” and “no child left behind.”

Unfortunately, all these efforts did not change the facts that the U.S. education systems were severely damaged and students’ performance have not been improved.

The reason for the decline of the U.S. schools’ performance is not that students today are not as intelligent as before but because communists are quietly carrying out a war against our next generation, using the education system as its weapon.

Charlotte Thomson Iserbyt, a former senior policy adviser to the U.S. Department of Education, wrote in 1999, “The reason Americans do not understand this war is because it has been fought in secret—in the schools of our nation, targeting our children who are captive in classrooms. The wagers of the war are using very sophisticated and effective tools.”

We will concentrate on how the communists have successfully ruined our students’ morality in our next video.