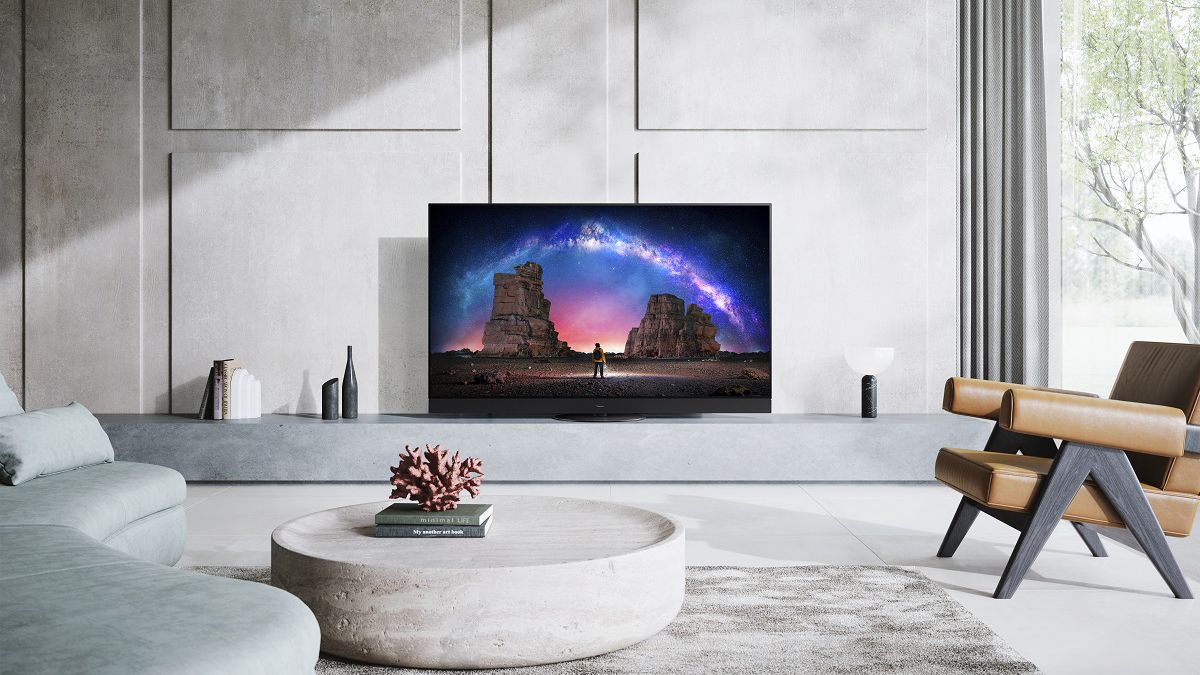 The Panasonic JZ2000 OLED is a force to be reckoned with. With its Master HDR OLED Professional Edition panel, an overhauled sound system that belts Dolby Atmos sound out of every corner, and a boost to gaming specs and HDMI 2.1 connectivity, this flagship 2021 screen is easily one of the best TVs we’ve ever had the pleasure of reviewing.

It’s the small changes that mark out the JZ2000 over its predecessor, the (also five-star) HZ2000. You’ll now find HDMI 2.1 inputs, along with VRR (variable refresh rate), ALLM (auto low latency mode) and a reduced input lag of just 14.4ms – making this a much better bet for hooking up to a PS5 or Xbox Series X console.

While the small drop in overall audio output may sound like a loss to some, the 125W on show here is certainly enough to blast your eardrums into next week (if that’s what you’re after). We could barely get above the halfway point on this screen’s volume, while the redistribution of drivers to emit sound out of the sides only improves the spread of sound around your living room or home cinema cave.

New auto picture and sound modes should do most of the menu-fiddling for you, too, removing some admin from those who get lost in Panasonic’s extensive settings, while leaving the option for anyone to tweak and calibrate their screen as they see fit too.

And you’ll need to do some of that – or at least turn off Intelligent Frame Creation, as we go into below. But the overall package of a custom OLED panel, huge built-in speakers, and a powerful HCX Pro AI processor makes the JZ2000 a truly knockout screen for 2021.

You won’t get this set in the US or Australia, as Panasonic doesn’t sell TVs in either region – despite its cosy relationship with Hollywood colorists.

The JZ2000 OLED is a good-looking screen, even when it’s turned off. It features a very thin bezel, with a thick speaker grille sitting underneath the screen. And it’s the great benefit of the JZ2000 – in fact, the major difference between it and cheaper OLED TVs in the Panasonic range – that such hefty speakers are built into the set itself.

There’s no need to buy a separate soundbar here, with front-firing, upward-firing and even side-firing speakers bulking out the screen’s body. You’ll be able to see them pretty easily from every side, though Panasonic has somehow prevented a horror-show of jutting drivers, with tidy sections of speaker grilles placed on the front, upper side, and left/right corners of the casing.

The JZ2000 is chunky, for sure, and pretty heavy (23.5kg) for a 55-inch screen, even if it shaves a few pounds on the 26.5kg of its predecessor. But it doesn’t look bulbous or out of place, with the tower of upward-firing audio giving a clear structure to the rear of the set.

The swivel stand is a returning joy, too, having been standardized in the Panasonic OLED TV range in 2020. It won’t turn 360 degrees (it stops turning at around 20-30 degrees) but it’s a great help to be able to adjust such a heavy screen’s position with relative ease.

The included (and rather large) remote is classic Panasonic, and a dream for those who like having every conceivable button at their fingertips. It comes with a numerical pad, playback buttons, volume buttons, key streaming app shortcuts (six of them, including a customizable option), as well as inputs for switching between TV and AV sources and even picture settings on the fly. There’s also a voice assistant button, which at first use will direct you to choose either Google Assistant or Amazon Alexa, depending on your preference or associated smart home devices.

We didn’t see any HDMI 2.1 specification on last year’s HZ2000, so it’s great to see Panasonic course-correct now that the PS5 and Xbox Series X consoles are on the market.

Panasonic makes do with its own proprietary My Home Screen platform, which has been significantly upgraded for 2021. The once-basic overlay now packs in various apps and menus by default – with highly visible, circular icons – taking up the lower section of the screen when summoned by the remote, but with a translucent background that prevents it from feeling intrusive. Hovering over apps will now bring up a preview of in-app content, in a similar vein to LG’s webOS and Samsung’s Tizen platforms, too.

That particular app has been missing from Panasonic TVs since its inception, meaning that big Disney / Marvel fans may require an additional streaming device to get the app on their television. It’s a pain, for sure, given the vast expense of this premium OLED screen, but many may not miss the absence at all.

Custom OLED panel makes for incredible imagesSome slight motion judder, but only with default settingsBrighter than the average OLED

The Panasonic JZ2000 uses the same custom panel, with minimal alteration, as what we saw in last year’s HZ2000 – and which is now being used in the step-down JZ1500 and JZ1000 models. That means the JZ2000’s picture isn’t quite as standout as before, but it’s still the upper limit of what you can expect from Panasonic TVs today.

This custom panel – the Master HDR OLED Professional Edition, to use its full title – is able to up the average and peak brightness usually possible through an OLED screen, in a similar vein to the OLED evo technology used to enhance light output in this year’s LG G1.

Watching Netflix’s Crazy Ex Girlfriend in HD, it’s apparent just how impressively Panasonic’s HCX Pro Intelligent processor can upscale low-res content to fit this 4K TV’s many pixels. Detail is incredible, and even if it tends to focus more on foreground elements of the picture, you’re getting the important information presented with precision.

The first thing you need to do is turn off Intelligent Frame Creation, which is in the Picture Settings (hit the Menu button on the remote, then press ok on Main Menu). It’s a scalable feature that inserts additional frames to make “the images smooth and clear,” with the option to have it on Min, Mid, Max, or Off. However, in our testing we found it brought up an irritating amount of video noise around fast moving objects.

It’s more prominent in older, low-res content – when watching the young Milo Ventimiglia pacing down the street, the sudden movement of picket-fences in the background will lead to grain, while even a fast flick of the head in The Greatest Showman (on 4K Blu-ray, no less) can brush up against this problem.

Thankfully, this feature is easy enough to turn off, and the strengths of the JZ2000 vastly overpower this small issue. The OLED panel makes for intensely deep blacks and crisp contrast. Watching The Greatest Showman, Zendaya swinging into view makes for a startling burst of color, out of the darkness of the tent’s crevices, and it’s this contrast of bright colors and highlights against well-defined, darker backgrounds that makes the JZ2000’s images so captivating to watch.

There are a number of picture presets, and possibly more than you might be used to (as with its remote). Panasonic is the TV maker for those who like to fiddle and tweak their picture to the best possible outcome, and that’s well on show here.

Normal is the default picture settings, and will serve you fine for everyday watching, though the Cinema preset will lower the saturation slightly for a more, well, cinematic appearance. True Cinema is an even better choice for films, with deliciously dark edges upping the contrast and giving a firm definition to the objects on screen, though it does appear to reduce the brightness output of the screen to achieve this.

Filmmaker Mode appears to sit somewhere between these two settings, and is ostensibly for those who want to watch media ‘as intended’ by its creator – something that works pretty admirably on a high-end OLED TV, though may not be as successful on other sets. Dynamic, as per usual, offers increased brightness and vibrancy along with oversaturated images, but it’s not as bad as what we’ve seen on some TVs. You can also opt for the AI Auto picture setting that auto-calibrates the preset to the kind of content that you’re watching.

The light sensors built into the JZ2000 are also incredible for altering brightness output and contrast on the fly, adjusting in real time as you open or shut the curtains, or switch off a ceiling light.

For gamers, this Panasonic TV also offers a respectable input lag of 14.4ms (with Game Mode activated), down from over 20ms on last year’s HZ2000. OLED screens benefit from a near-instantaneous response time, given how fast its pixels can change from one state to another, and PS5 or Xbox Series X games will look pretty breathtaking on a screen like this – with the intense audio output for immersive shooters, racers, walking sims, and the like.

The major twist in this year’s flagship is the introduction of side-firing speakers. These work in tandem with the set’s upward- and front-firing drivers to create room-filling, full-bodied sound.

The JZ2000’s speakers are truly incredible for built-in audio, being capable of recreating both the delicate footstep on a stairway and roaring explosion of a car crash in equal measure. You’re getting precise audio detail as well as a strong bass response – and while some subwoofers and surround sound systems can outperform it, you simply won’t get better built-in audio on a smart TV right now.

Listening to the set, it’s hard to pinpoint a huge difference over last year’s HZ2000. It’s more of an evolution than a revolution of the set’s audio capabilities, with the majority of the volume still jutting upwards or forwards out of the screen’s speakers. The side-firing element is limited, then, but it only helps to make soundtracks and dialogue heard across a room.

While any TV will have a ‘sweet spot’ for the picture and sound (usually dead on center) the wide viewing angles of the OLED panel and side-firing sound of the JZ2000’s speakers means that sitting in almost any spot in your living room should make for an impressive movie night. And it’s this combination of picture and sound capabilities that makes the JZ2000 an all-in-one home cinema in a way the LG C1… simply isn’t.

The JZ2000 does feature a drop in overall volume compared to its predecessor, from 140W to 125W, but a move towards better audio allocation / directionality seems preferable, and we doubt you’ll miss the extra horsepower (we never got above 50 on the set’s 100-point volume scale – it’s that loud).

You want an all-in-one home cinemaThere’s no need for soundbars here. With a custom 4K OLED panel and 125W Dolby Atmos speakers, you’re getting the benefit of a knockout picture and sound performance all in one.

You’re always tweaking the position of your televisionThe swivel stand here is a godsend, allowing you to continually adjust the exact position of the JZ2000 on the fly.

You’re a keen gamerInput lag is better than ever before on a Panasonic OLED, while the addition of VRR, ALLM, and other HDMI 2.1 specifications means this could make a solid gaming TV as well as a cinephile screen.

You already have a good sound systemThe main perk of the JZ2000 is its beefed-up sound system, so if you have a good selection of soundbars and speakers to plug into your television, you likely won’t get the benefit.

You have a 2020 OLED TVThe advancements here are mainly in connectivity, and some auto-correction picture and sound settings, and the input lag improvement won’t impress those who aren’t into games. There’s not enough here to throw the HZ2000 in the bin, even if the overall package has improved.

You have a tight budgetThis is an unapologetically premium screen, and cheap isn’t in its vocabulary.