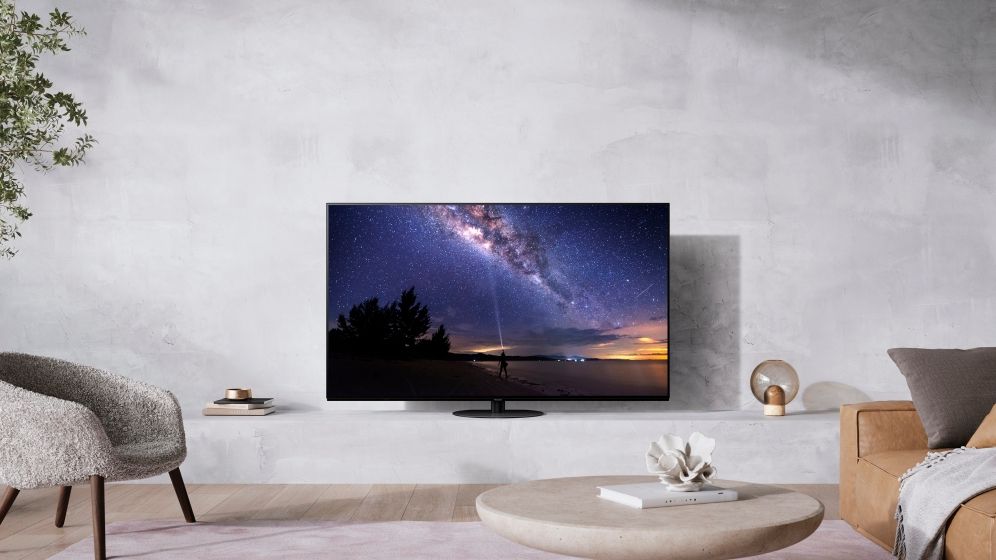 With the JZ1000, Panasonic has – and not for the first time – attempted to position itself as the choice of discerning grown-ups. Why be slim enough to comfortably hang on the wall, Panasonic asks, when you can stand on a swivelling pedestal? Why be the best upscaler around when you can enjoy such rich, lustrous native 4K images? And why watch Disney Plus when you could, um… not?

To be fair, the JZ1000 gets an awful lot right. Picture quality from 4K sources is outstanding: bright, high-contrast, lavishly detailed and with those deep, dark blacks we all associate with OLED technology. It’s ergonomically impeccable, and in My Home Screen 6.0 it’s got Panasonic’s most competitive smart TV interface so far. It accommodates all the best and most techy features of next-gen consoles. And that swivelling central stand is not to be sniffed at, either.

At this money, though, we’d ideally like it to sound a bit more animated. And there’s no denying that some alternative televisions can make a bit less of a song and dance about being asked to upscale less information-rich content. But take it on its own terms, though, and there’s plenty to enjoy here.

The Panasonic JZ1000 is on sale now, and in the UK it costs £1,899 at a 55-inch size. There’s a compact 48-inch OLED variant available too, which will set you back around £1,599, and a bigger 65-inch alternative that goes for £2,499. Considering this is one of Panasonic’s more affordable OLED ranges (only the JZ980 is less expensive, in a series that tops out with the JZ2000 we reviewed earlier this year), those are premium prices that the likes of LG and Philips can comfortably undercut.

Despite Panasonic’s impressive status among Hollywood professionals, it doesn’t sell its TVs in the United States – and doesn’t trouble the Australian market either. So while we’d ordinarily give prices for those territories here, in Panasonic’s case there are none to give.

From the outset, this is a bland and anonymous television – and we mean that in an entirely positive way. The bezels surrounding the screen are brief, and the ‘Panasonic’ badging in the centre of the bottom bezel is extremely modest. Unlike the JZ2000, the audio system here is unremarkable (two full-range drivers powered by 15 watts each), so there’s no additional hardware below the bottom of the screen.

Viewed in profile, though, the Panasonic is altogether more assertive. Yes, it stays slimmer for longer than many alternative designs (the JZ2000 among them), but where it swells to accommodate the necessary electronics it’s a pretty retrograde 69mm deep. Hang your JZ1000 on the wall and it’s not exactly going to be flush.

So it’s just as well Panasonic has given some thought to the pedestal on which it stands. It’s a heavy, almost circular foot in the middle of the chassis – which means the JZ1000 doesn’t need an especially wide surface to stand on. And it swivels through almost 30 degrees, which makes this TV easy to reposition depending on how many people are trying to watch it. It’s not rocket science, but convenience like this seems to elude many of Panasonic’s rivals.

Arranged on the notably chunky rear of the screen are four HDMI inputs. All support the Auto Low Latency Mode aspect of HDMI 2.1, while a couple include support for Variable Refresh Rate and 4K High Frame Rate too. There’s also eARC compatibility via one of these inputs.

Further connectivity is available via three USB inputs (one 3.0, two 2.0), a CI card slot, an Ethernet socket and three aerial binding posts for the screen’s twin TV tuners. Wireless connectivity is handled by dual-band wi-fi and Bluetooth. As far as outputs go, there’s a digital optical socket and a 3.5mm analogue that can switch between a headphone output and pre-out for a subwoofer.

The screen itself is Panasonic’s ‘Master HDR OLED’, rather than the ‘Master HDR OLED Professional Edition’ of its pricier JZ2000 sibling. They share the HCX Pro AI processing engine, though, and Panasonic – not for the first time – is to be warmly congratulated for incorporating every worthwhile HDR standard here. HLG, HDR10, HDR10+, HDR10+ Adaptive and Dolby Vision are all on board; one day the likes of LG, Samsung and Sony will be able to say the same, but we’re not holding our breath.

Among the picture modes available are ‘Filmmaker’ and ‘Netflix Calibrated’ (for those viewers who want to know what it’s like to have cataracts), while the JZ1000’s integrated sensor means Dolby Vision IQ, Dolby Vision Vivid and Dolby Vision Dark are available too. And because Panasonic has professional credentials to live up to, there are also a couple of ISFCCC modes on board.

Big remote control is a bit of a throwbackWorks with Amazon Alexa and Google AssistantMy Home Screen 6.0 is the most competitive yet

Panasonic has never existed at the cutting edge of smart TV technology, but the latest version of its proprietary My Home Screen interface is its best yet. Yes, it’s still a little bit backward when compared to, say, Samsung’s Tizen-based alternative or LG’s webOS, but My Home Screen 6.0 is clear, logical and simple to navigate. It’s got a pretty good selection of apps available too, with Disney Plus being the only meaningful absence.

Navigation is via quite the largest remote control handset a 21st-century TV ever shipped with. On the plus side, this means all the buttons are of decent size and all labelling is legible (Samsung, in particular, could learn a thing or two here) and it’s unlikely to be lost down the back of the sofa for long. On the other hand, it takes up more space on the coffee table than seems reasonable. At least there’s responsive voice control available here too, for those moments when you’re feeling too weak to heave the remote handset into position.

Balanced, convincing 4K imagesImpressive brightness and contrastUpscaling is ‘good’ rather than ‘great’

Panasonic has hit upon a lovely balance with the set-up menus for the JZ1000. They’re comprehensive but not intimidating, and whether you’re a committed tweaker or simply anxious to get your new TV up and running, it won’t take you long to get a picture you’re delighted with.

And once the JZ1000 is finessed to your liking, you’re free to sit back and bask in this Panasonic screen’s considerable picture-making talents. And they’re talents that are most obvious when you’re watching some high-quality native 4K content. The debate about the merits of Christopher Nolan’s Tenet as a film may still be unresolved, but no one doubts it’s a lovely-looking movie – and it looks particularly lovely in the hands of the JZ1000.

As is customary with well-sorted OLED panels, the most immediately striking element is the depth, lustrousness and extensive variation in the black tones – the word ‘inky’ barely just justice to the black levels the Panasonic is capable of generating. And despite the fact this is Panasonic’s second-best OLED panel, it’s still quite a lot brighter than the OLED norm. That means contrasts are wide, and even more convincing thanks to the amount of detail the JZ1000 manages to load into those white tones. The JZ1000 delivers whites that are clean and bright, and that pop from the screen without getting all shouty about it.

The colour palette is extensive, too, and there seems to be no realistic limit to the variations in tone and shade the Panasonic can describe. Detail levels are impressive too, and the JZ1000 is able to control even the most testing images. Some heavily textured material, for example, with a tight and multi-coloured pattern, is enough to give some lesser TVs the vapours, but the Panasonic just gets on with the job of handing over all the relevant information in a way that’s unforced, natural and without noticeable effort.

Getting the JZ1000 to describe on-screen movement as authoritatively, though, may find you diving back into the set-up menus, but perseverance will bring its rewards in the form of smooth, unaffected motion. ‘Intelligent Frame Creation’ seems to be the biggest obstacle to achieving convincing on-screen movement – so start by switching it all the way off and make incremental adjustments from there. Don’t imagine you’ll be forever delving into menus, though – this isn’t a Philips TV, after all.

When it comes to upscaling sub-4K content, the Panasonic is very good rather than great. More-or-less everything that’s impressive about its 4K images is carried over: the fine contrasts, the low-light detail, the mastery of tone and texture, the way the subtleties of lighting are described. Overall detail levels take a bit of a hit, though, and the previously exemplary edge-definition becomes a little less assured too. But as long as you don’t stray into the realms of 720p DVD content or worse, nothing about the way the Panasonic fills its screen with information is going to cause any meaningful alarms.

Even more than the reduction in panel quality, it’s the difference in audio specification that lets you know this JZ1000 is a more affordable option than the JZ2000 we looked at and listened to a while back.

Unlike the whistles-and-bells arrangement of the JZ2000, this screen makes do with the most prosaic sound system imaginable: two full-range drivers powered by a total of 30 watts. No, it’s not the least adequate audio system ever fitted to a TV, but by the standards of £2K-ish OLED screens from high-profile brands it’s getting there.

In fairness, there’s nothing actively unpleasant about the way the Panasonic sounds. It’s actually quite distinct and easy to follow, especially where dialogue is concerned, and it doesn’t get edgy or hard even if you deploy every last one of those 30 watts. But it’s undemonstrative and undynamic, with a sort of small-scale matter-of-factness to its presentation that can make even the most full-on Hollywood action movie sound bland.

There’s enough space between the bottom of the screen and the pedestal stand for a soundbar, too, which doesn’t feel like a coincidence.

You tend to watch 4K contentThis Panasonic TV does really good work with 4K stuff, but isn’t a class-leading upscaler.

You have (or have budgeted for) a soundbarThe JZ1000’s audio system needs all the help it can get, so it may be worth opting for a soundbar alongside your screen.

You tend to misplace remote controlsWith a hefty body and buttons for days, we’d challenge you to try and lose this remote.

You want to wall-hang your new TVThe JZ1000 is only slim in some places, and pretty hefty in others. This is a TV best placed on a counter, where its swivel stand can be put to good use.

You want the best smart TV interface this money will buyThis is Panasonic’s best effort yet, but there are more impressive alternatives out there, such as Samsung’s Tizen or LG’s webOS.

You’re after a bargainVery similar performance is yours for a little less money, especially in LG’s 2021 OLED range.