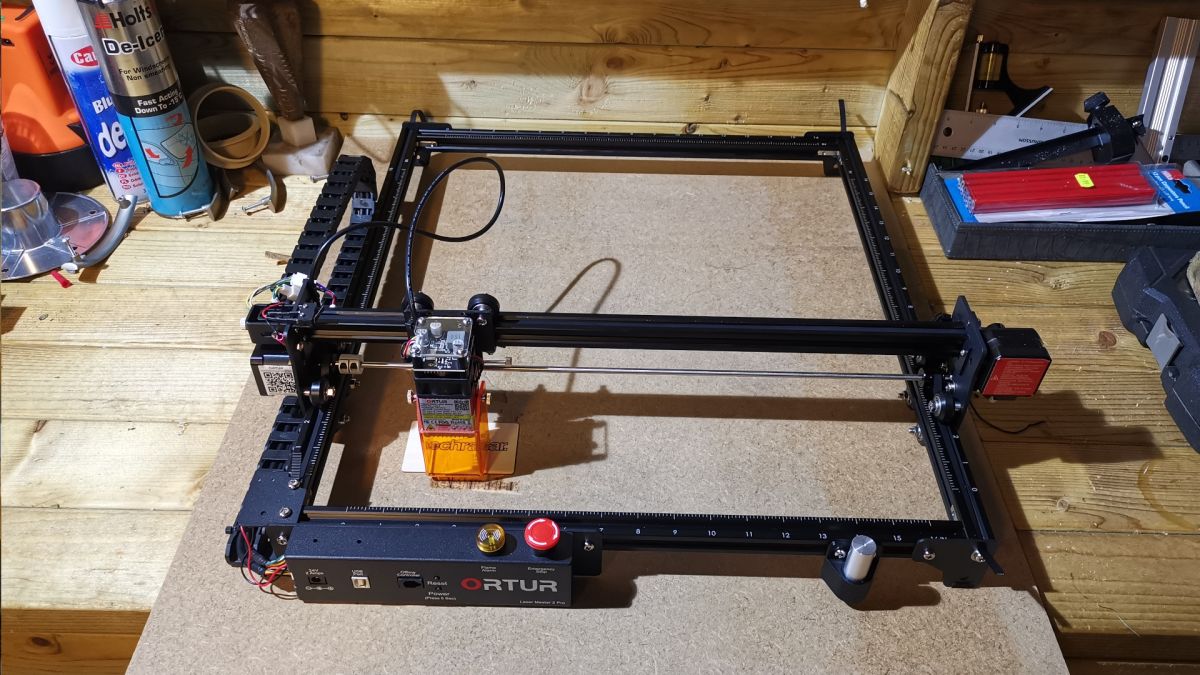 The Ortur Laser Master 2 Pro is the latest addition to the Ortur family of diode laser engravers, promising a step up from the existing Laser Master 2 machine. Alongside 3D printing and similar ‘workshop hobbies’, laser cutting and engraving is steadily increasing in popularity thanks to the growing availability of affordable machines, with Ortur looking to fill with intermediate skill level hardware void that exists between entry-level products and full workshop Co2 lasers.

For some this might be a steep price for an upgrade, but given the differences between the two models, we would estimate it’s a fair price for what you’re getting.

Having used the Laser Master 2 Pro for a few days, we’d argue Ortur has executed it very well, and most of the criticism we have is formed around the steep learning curve of its use rather than the hardware itself, but even that is something that Ortur has made efforts to improve for its users.

These are the full specs of the Ortur Laser Master 2 Pro:

Memory: Direct connection to a computer

When assembling the machine, the provided instructions are some of the best we’ve ever seen on a self-assembly kit. The provided paper leaflet goes over everything you need sufficiently, but we would heartily recommend downloading the available PDF, especially if you’ve never constructed a device like this yourself before (which can cause some understandable anxiety given the fact you’re building a tabletop fire risk). It might be rude to call it ‘idiot-proof’ but the detailed images and clear instructions certainly put you at ease.

Solo assembly takes around one to two hours, though this could be shaved down to around 40 minutes if you’re particularly experienced putting small-scale workshop machines together. The build quality feels robust, which is reassuring given the open design allows you to place the laser directly onto any large surfaces you’re wanting to cut or engrave, though we wouldn’t recommend being unnecessarily rough with it.

A small frustration is a single cable that connects the laser head to the motherboard that hangs freely across the top of the machine, something that while not dangerous in any way, did repeatedly get caught on the machine. The protective cover for the laser head also feels a little too loose at times despite tightening, so some form of locking mechanism or improved catch on the sides would have been welcomed.

The workable area for the engraver is 400mm x 400mm (or 15.75 x 15.75 inches), which is actually a smidge smaller than the original Laser Master 2, though only by 30mm which shouldn’t impact projects too much unless you’re planning to use the engraver for larger work such as signs or wall art. Even without that loss though, it’s a great workable space that doesn’t restrict you to smaller workloads or projects like other diode lasers on the market, which makes this a comfy middle ground for anyone wanting to get a little more serious with their engraving hobby before stepping up to a full Co2 CNC machine.

There are, of course, numerous benefits you can enjoy by not making that upgrade though. We found that we were consistently surprised by the level of detail achieved across our tests, so if you own a small business making personalized engravings the Laser Master 2 Pro would suit you just fine, and despite being a diode laser, it’s still powerful enough to make detailed cuttings to a variety of materials provided you can get the settings right.

The Ortur Laser Master 2 Pro is also incredibly light despite its size, much easier to move around a workshop and store away as needed, which is something you wouldn’t be able to do with a larger Co2 laser machine, especially given how delicate the glass components can be.

A notable change is that the Laser Master 2 Pro uses a 3rd generation 32-Bit motherboard that increases the engraving speed from the previous 3,000mm per minute to 10,000, saving you a great deal of time if you plan on engraving in large batches. The motor for the machine has also been relocated to the side of the X-axis to help reduce the weight of the laser head which also contributes to the faster engraving speed.

The laser itself has also seen some improvements. While the original Laser Master 2 came with three different power variations: 7W, 15W and 20W (which proved a tad confusing as this is the wattage going into the laser rather than the output), the Laser Master 2 Pro comes in a single 20W model (with a 4.5-5.5W output) with a much smaller focal point, 0.08 x 0.15mm down from the previous 0.23 x 0.23mm. If you picture how much more detail an artist can achieve with a finer paintbrush, then this is a good way to explain in basic terms why that’s great news for users who want to engrave more detailed pieces.

In keeping with Orturs helpful hand-holding, you get a few things in the box to make things easier if you’ve never ventured into the engraving hobby before. One is a plain metal rod, that’s been carefully measured as the exact distance needed between the laser head and whatever surface you’re cutting or engraving onto, so you can just lower the head until it touches the rod and then tighten everything back into place.

You also get some free protective glasses in the kit which is especially important as looking at a laser can be extremely damaging to your eyes, though the quality of these glasses isn’t especially high. We found the pair we received had sharp plastic exposed on the side that scratched up our reviewer’s temples, so either keep some sandpaper handy or make sure you buy a high-quality pair.

You’ll need to install either LightBurn or LaserGRBL onto a laptop in order to get started with engraving. LightBurn is considered a more premium application, costing $40 / £30 / AU$55, but you can get a free 30 day trial of the software to see if it suits you. A free alternative is LaserGRBL, an open-source software that does everything you need, though with less finesse than Lightburn. Both are great, and the choice between the two is ultimately down to personal preference.

Your engraving will also stop if you try and move the machine while it’s in motion so it’s important that you set the Laser Master 2 Pro up in a well ventilated, low fire risk areas so that once you start a project, you can leave it running to completion. A caveat we noticed is that this can be a little overly sensitive at times, shutting down an engraving and declaring an ‘emergency’. This happened twice over several days of testing the machine, but it was very quick to resume the project after checking everything was okay.

The quality of the engravings and cuttings is impressive, and the speed of engraving is much quicker than we expected. The Deaths Head Moth coaster took the machine around 90 seconds to complete in one run, and the TechRadar cutting took two passes at 60 seconds each.

This hobby comes with a steep learning curve, and despite Ortur providing a full list of settings to try with a variety of materials that can be used on the Laser Master 2 Pro, you’re going to need to experiment a fair bit to get things right. The hardware performs perfectly as intended, but don’t go into this expecting your first few days of using the machine to kick out flawless engravings if you haven’t pre-tested your image with the material you plan to engrave onto.

If you’re looking to take your first steps into engraving and laser cutting however, the Ortur Laser Master 2 pro has made steps to make the process as painless as possible for newcomers and experienced workshoppers alike, making this a fantastic product across a range of skill levels.

You’re new to laser cutting and engravingDespite its ‘Pro’ title, this engraver greatly improves many aspects of getting started in the hobby, from assembly to leveling the machine.

You’re looking for a side hustleIf you’re looking at starting a small side business, customized engravings is a great venture and Ortur has made it easier to achieve consistent high-quality results without shelling out for an expensive Co2 laser or risking a cheaper diode laser.

You need a large engraverMany cheaper hobbyist engravers tend to be on the small size, but with 400mm x 400mm to play with, the Laser Master 2 Pro can create some sizable projects.

Don’t buy this if…

You’re a large scale businessWhile the Ortur Laser master 2 pro is a great beginner to mid-range product, anyone looking for mass-scale industrial engraving or cutting will need to look for something a little beefier for their workshop.

You don’t have access to a workshop or garageIt’s really important that you have a fireproof surface in a well-ventilated space to set this up, so if you’re based in an apartment with small windows we wouldn’t advise jumping into laser engraving at all, regardless of the safety features in the Laser Master 2 Pro.