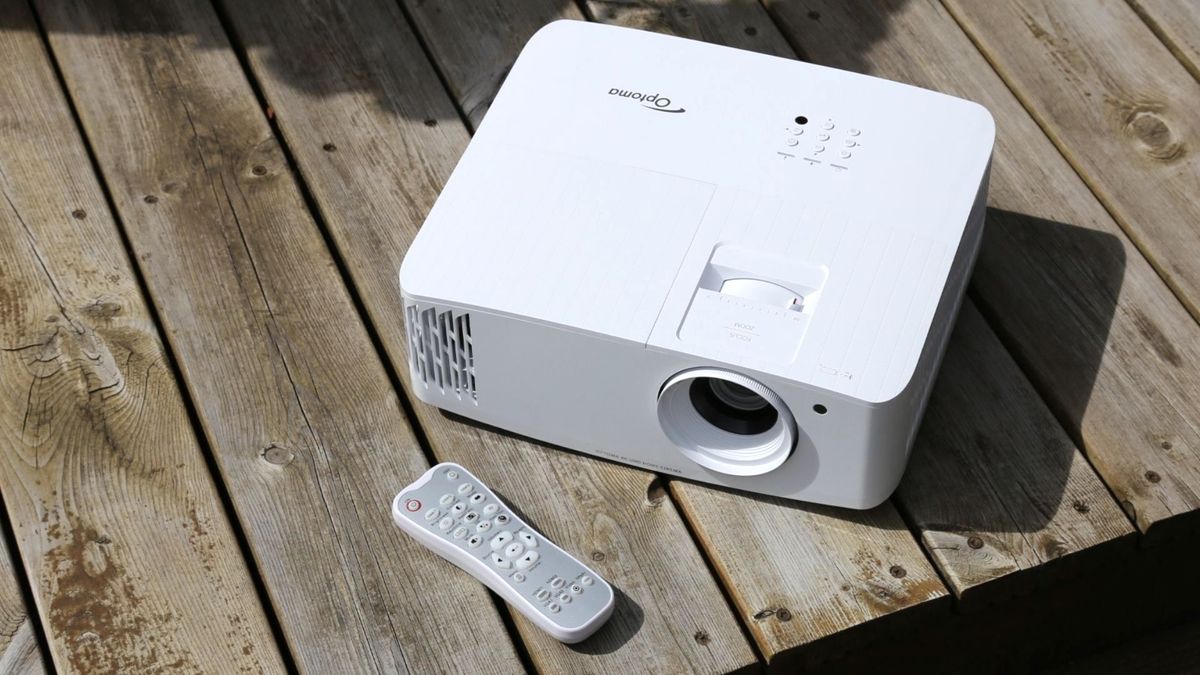 The Optoma UHD38 is a reasonably compact DLP 4K pojector ideal for all-round use in the home, but with extra-special features for gaming. Able to pump-out very bright images, the UHD38’s searing 4,000 ANSI Lumens means it can be used during the day.

However, its real trick is the ‘Enhanced Gaming Mode’ that lessens input lag, making for 16.7ms response time with console and PC games played at 4K/60Hz, and an even faster 8.9ms at 1080p/120Hz if you don’t mind a drop in detail.

Yes, you’ll find even faster specs on LCD monitors, but not on many projectors or TVs away from the really high-end models. What the UHD38 offers that smaller monitors can’t compete with is immersive, super-sized images that also comprise crisp, vibrant HDR colour and mostly excellent contrast. It also offers a 32:9 ‘ultrawide’ aspect ratio, which some games now offer.

A follow-up to the Optoma UHD30, the UHD38 is a very capable all-round projector but it’s not for everyone. Why not? That would be its long-throw lens. It’s able to create a 300-inch image, which is perfect if you have a large blank wall that’s begging to be used for some super-sized gaming. Just know that this long-throw lens does make the minimum image size somewhere around 100-inches if you put the UHD38 about 3m away.

So this compact DLP projector probably isn’t the perfect plug-and-play projector for most homes, but if its giant-sized, immersive and lighting-quick images are what you’re after then the UHD38 comes highly recommended.

The Optoma UHD38 is the flagship of Optoma’s two-strong DLP projector lineup for 2021. A successor to the Optoma UHD30 from 2020, the main difference between the Optoma UHD38 and the step-down Optoma UHD35 is brightness. While the former manages 4,000 ANSI lumens, the latter musters 3,600 ANSI lumens. Both include the all-important ‘Enhanced Gaming Mode’ that makes it much faster than most TVs, therefore (in theory) giving the user a slight competitive gaming advantage.

The UHD38 is reasonably compact, measuring just 315 x 270 x 118mm (12.4 x 10.63 x 4.65 inches) and weighing 3.98kg (8.77lbs). Easy to pick up and position, the rounded white plastic chassis is pleasant enough though there are a few airflow grilles that leak light. You likely won’t notice if you sit in front of the UHD38 – which you most probably will – though in a blackout room the resulting glowing blue light is distracting if it’s in your eye line.

Setup is simple, if lacking in flexibility. There’s a manual focus ring around the lens while a lever behind it offers a paltry 1.1x zoom. Critically, the UHD38 has a 1.5:1 throw ratio so you need to place it about 3m from a 100-inch screen. It also lacks manual lens shift levers, which all projectors should always include; the provision of some basic digital keystone correction controls is no substitute.

On the rear is a brace of HDMI 2.0 inputs. However, while buyers of the UHD38 might be excited about its ‘Enhanced Gaming Mode’, its lack of HDMI 2.1 means it can’t support 4K/120Hz. There are plenty of other ins and outs; VGA in, 3.5mm audio in and out, optical audio, a USB-A and a 12V trigger to hook-up to a motorised screen.

Its other key feature is that it boasts more brightness than ever. At 4,000 ANSI lumens, the UHD38 is significantly brighter than its forbearer, the UHD30, which offers 3,400 ANSI Lumens. It means it can work during the day, but also that images can be convincingly pushed beyond 100-inches, if you have a screen or wall big enough.

That extra brightness doesn’t appear to come with a dip in quoted lamp life, with Optoma promising the same 4,000 hours in bright mode, 15,000 hours in dynamic and 10,000 in eco mode as for the UHD30.

The UHD38 also comes with a couple of built-in 10W speakers, which offer pretty decent quality given their small size. It reaches high volumes without distortion, though it can sound a little muffled. In the box is also a small, rather fiddly remote control that’s nevertheless usefully backlit in blue light when used. It’s not as responsive as it could be, with multiple presses sometimes required to get commands to work.

Here’s a projector that’s optimised for gaming throughout, but still generally impresses across the board. The UHD38’s headline feature – Enhanced Gaming Mode – impresses in its lag-free fluidity but doesn’t peak with 4K. In fact, if you’re playing a game that’s natively 4K/60Hz then the UHD38 delivers only a 16ms response time (still faster than most TVs) and doesn’t support 4K/120Hz. At 1080p/120Hz it manages 8.9ms and at 1080p/240Hz a mere 4.2ms. These characteristics apply whatever presets are used, from Cinema through Gaming, Reference and Bright.

A lot of this is show-off detail since most humans aren’t going to notice; the fact that the UHD38 goes well below 40ms is enough to impress.

Just as importantly, fast-action sequences during games and movies look fluid enough, camera pans don’t suffer from judder and there’s not a trace of that old DLP nasty – ‘rainbow effect’. In fact, the UHD38 delivers a likeable image whatever the source and resolution.

It’s searingly bright, if you want it to be, with its Bright mode’s 4,000 ANSI lumens suitable for use during, say, a summer afternoon, as long as there’s no sunlight on the screen or wall hosting the projection. However, Bright mode does add a noticeably green tinge.

For all its all-round image quality – save for those average black levels – the UHD38 isn’t the most flexible projector for the home. Blame lies squarely with its long-throw lens, whose 1.5:1 throw ratio and paltry 1.1 zoom means you’ll struggle to project an image any smaller than 100 inches.

For all its quality, know that the UHD38 isn’t strictly speaking a natively 4K projector. Built around Texas Instruments’ 0.47in DMD DLP chip, it’s optimised for 1080p but uses a technique called pixel shifting to create an image of multiple flashes that for all intents and purposes looks as if it’s the all-important 3840×2160 pixels – 4K resolution. You’ll struggle to tell the difference, though.

Should I buy the Optoma UHD38?

You want epic gaming day and nightA massive image – as big as 300-inches – is possible from the UHD38, as is gaming by day or night, both thanks to its 4,000 ANSI Lumens brightness output.

You want to get the best from your next-gen console All hail Enhanced Gaming Mode, which works with consoles or PCs at 4K/60Hz, 1080p/120Hz and 1080p/240Hz and ensures input lag isn’t going to be a problem.

You have a small roomThe UHD38 isn’t blessed with a short-throw lens, so you’re going to have to have about 3m of space to create a 100-inch image on a screen or wall.

You want perfect 4K HDR moviesAlthough the UHD38’s Cinema mode is thoroughly watchable and its 4K detail is excellent, it’s not going to blow you away with HDR if you have a dedicated blackout home cinema.