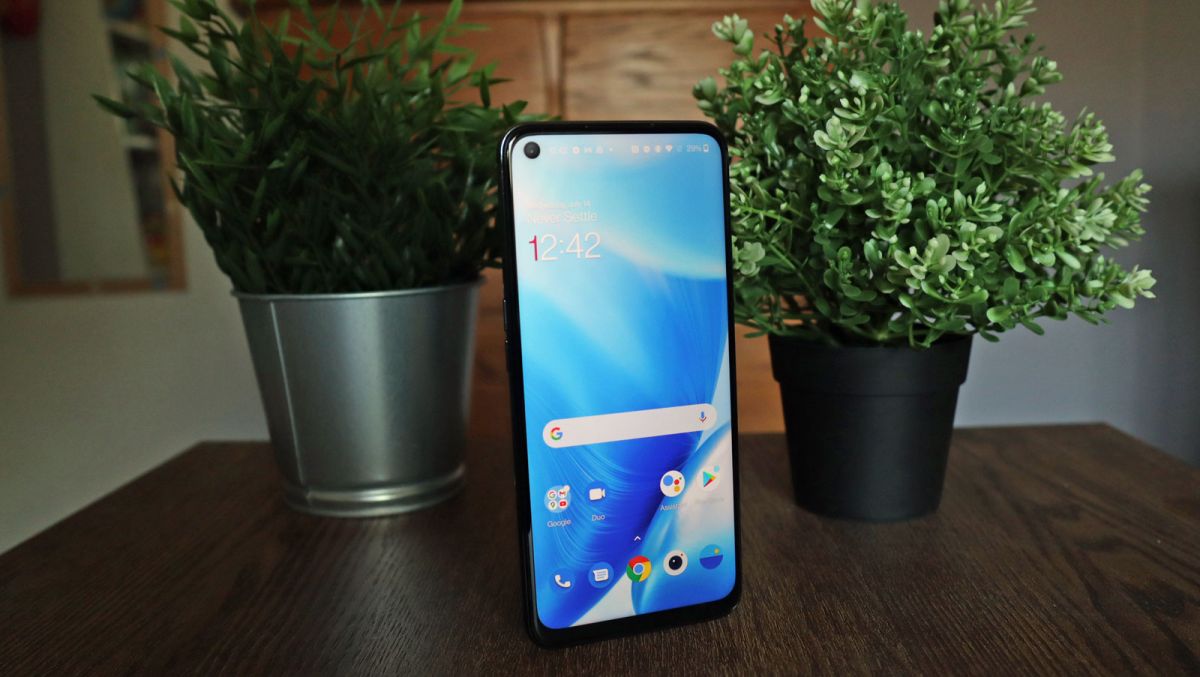 The OnePlus Nord N200 5G is a refreshed version of the budget OnePlus Nord N100 that launched last year, with slightly better specs and, as the name tells you, 5G connectivity.

While it’s no surprise that OnePlus would release another affordable phone to make a play for a lucrative segment of the market – it feels here like the brand is trying to return to the leaner, ‘affordable yet powerful’ style that made its early handsets so popular – it’s strange that it’s only (for now at least) selling this phone in the US and Canada. Surely there are other regions that would appreciate OnePlus’ newest cheap phone.

The OnePlus Nord N200’s value is easy to appreciate: it’s a sleek, powerful phone with a great design that makes it feel more premium than its price would suggest. If all you need is a phone for watching shows and doing basic tasks, this is a great cheap handset to pick.

The phone starts to show its limits with specs that are reasonable but not awe-inspiring: a Qualcomm Snapdragon 480 5G chipset and 4GB of RAM that together are able to play games and media reasonably well, though not without the occasional stutter. The phone’s 64GB of storage is fairly typical among budget phones, but the expandable storage limit – up to 256GB via microSD – feels arbitrarily low.

The cameras also leave a lot to be desired. There’s a 13MP main shooter that’s capable of taking decent photos, but the other rear shooters – a 2MP depth and 2MP macro camera – are less interesting, and considering that other budget phones are starting to feature ultra-wide cameras, it’s disappointing to see the limited variety here. They capture well-lit scenes and subjects well enough, but struggle with contrasting colors and brightness.

Overall, the OnePlus Nord N200 5G is a good budget phone for those who don’t mind its few but noticeable shortcomings, which we’d imagine is a good number of users – which is why we’re perplexed at the limited release plan. Doubtless consumers in other countries would appreciate the OnePlus polish in a more affordable phone.

In any case, the Nord N200 5G’s low price makes it good value for what it does offer: a great media-watching experience and 5G connectivity on the cheap. You won’t find many better phones at this price.

As we’ve mentioned, the phone is only slated for release in the US and Canada, with no news on if or when it will be made available in other regions. US consumers can buy the phone unlocked from OnePlus.com and online retailers (Best Buy, Amazon, and B&H) or with carrier support from T-Mobile and Metro.

The Nord N200 5G feels more premium than it needs to be for a budget phone. While cheaper phones these days look better than they ever have – the Moto G9 series is a great example – this OnePlus handset still looks a cut above.

The Nord N200 5G’s plastic back feels more like glass, with a frosted finish of the kind we’d expect to see on a pricier phone. The front display’s bezel is pretty lean for a budget handset, while the punch-hole isn’t too big, and the plastic sides feel smooth, with an almost chromed metal feel.

The N200 5G doesn’t have an in-screen fingerprint sensor, but it does have the next-best thing: an extra-large lock button on the right side that has a fingerprint scanner built in. It’s pretty accurate and fast, too, with good placement close to where your thumb would naturally rest when holding the phone one-handed.

The remaining design is fairly perfunctory: thin volume buttons on the left side, a SIM slot above it, and nothing at the top but a microphone. The bottom of the phone has a USB-C slot in the middle, speaker to the right, and a 3.5mm headphone jack on the left.

The N200 5G packs a 6.49-inch IPS LCD display with Full HD Plus (2400 x 1080 pixel) resolution. As previously mentioned, the bezels aren’t too thick, giving the phone as sleek a look as could be expected for a budget device. The punch-hole for the selfie camera is reasonably-sized, and won’t block much of the screen.

The display is very serviceable, lacking a bit of sharpness but otherwise handling media and games well for a budget phone. The 90Hz refresh rate is also a nice touch for a budget handset, providing a smoother browsing and game-playing experience than the 60Hz refresh rate of displays on most low-cost phones.

The display is specifically great for watching media, with apps that allow you to control the resolution. When we watched Netflix, for instance, the picture was fine but not terribly sharp, but when we set the screen to 1080p on YouTube, the display was able to show content in great clarity, especially brightly-lit scenes.

Like other LCD displays, the Nord N200’s screen struggles most with dark subjects. If several are adjacent, they won’t have great definition and they’ll usually meld into a vague black puddle. But the display does wonders with color, presenting vibrant hues that don’t bleed into each other – an impressive feat for an LCD display. Simply put, the Nord N200 has one of the best non-OLED screens we’ve seen.

The Nord N200 5G has a triple rear camera array, although you won’t find an ultra-wide or telephoto camera here – like other budget phones, the N200’s extra lenses are more supplementary than serious photography tools in their own right: a macro camera and a monochrome sensor.

The phone has a 13MP f/2.2 main camera with electronic image stabilization (EIS), which handles up-close photography and well-lit daytime photos fine, though it suffers in more challenging lighting conditions – in shots with bright backgrounds in dim foregrounds (like, say, a person sitting in the shade at a sporting event) the foreground tended to be underexposed while the background highlights were blown out.

The other two lenses – a 2MP f/2.4 macro and 2MP f/2.4 monochrome – don’t add much to the phone’s photo capabilities that we could tell. Also, we couldn’t find some basic settings, such as how to switch from 4:3 ratio to 16:9, leaving the camera experience feeling lacking compared to other budget phones.

There’s also a 16MP front-facing camera, which takes sharp photos of the main subject but suffers from the same exposure issues as the main camera, including blowing bright backgrounds.

The specs in the Nord N200 5G are little improved over its predecessor, with the same 4GB of RAM and 64GB of storage (expandable up to 256GB) as the Nord N100. The chipset is what’s changed, from the Snapdragon 460 to the Snapdragon 480 5G.

That 5G capability is the real indicator of a performance jump, given the higher specs required to connect to 5G networks. The phone’s Geekbench 5 score of 1582 put its performance between benchmark scores for the Pixel 4a 5G and the Pixel 5.

In our experience, the phone is powerful enough to handle casual browsing and media watching, albeit with some very slight performance hiccups. When watching Netflix, for instance, there was the occasional very slight pause – not enough to be distracting, but noticeable nonetheless. This wasn’t uniform across media watching, though, as the YouTube app didn’t stutter.

The phone can handle high-performance games like Call of Duty: Mobile and render its graphics in decent resolution, although you might notice some dropped frames here and there – not enough to get you killed in a match, but a clear indication of where the phone’s specs struggle.

The phone runs Android 11 out of the box, with OnePlus’s OxygenOS overlay, which is still one of the cleaner custom smartphone UIs. There’s little bloatware in the apps and settings, and there are some nice extras, like the shut-out-everything Zen Mode and text-illuminating Reading Mode.

We did notice some interface hangups, like delayed launching of the camera app from the lock screen and an odd floating settings bar, which were intermittent but irksome, and felt like another consequence of the lower specs.

The Nord N200 has a 5,000mAh battery – which, while unchanged from the N100, is still a generous capacity that should last well into a second day of use. That capacity is equivalent to that in other big-battery budget phones, outside of the Motorola G9 Power with its colossal 6,000mAh power pack.

The Nord N200 5G lasted well into two days in our tests, and sometime seven into a third. The battery felt robust in our media tests, too: a 30-minute Netflix episode drained just 3%, while playing a 10-minute multiplayer game match (Call of Duty: Mobile) only sapped 1-2%, less than the norm for most phones we test.

In short, this phone should enable you to watch media and play games for longer than you could with other handsets.

The 18W charger included in the box is far from OnePlus’s fastest, but it works fine. In our early tests it recharged the phone from zero to around 40% in 30 minutes, which should see it juiced up to full in around 1.5 hours – not the best we’ve seen in top-tier handsets, but certainly not lagging behind, either.

You want a budget phone with a huge batteryThe OnePlus Nord N200 5G has a 5,000mAh battery, which is a huge capacity for any phone, let alone a budget one. Buy if you want two-to-three-day battery life.

You want a premium-looking phone at a lower costWhile not everyone’s priority, looks do matter – and the OnePlus Nord N200 5G looks more premium than a lot of pricier phones. Buy it if you’re looking for a budget phone that looks classier than the price tag suggests.

You want a phone with a wide variety of camerasThe OnePlus Nord N200’s biggest weakness are its cameras, with only main, macro, and monochrome lenses. Those wanting better cameras should look elsewhere, starting with the Moto G9 series.

You want strong performanceThe Nord N200 offers great performance for the price, but there are certainly handsets with better specs and which offer better performance, from the OnePlus Nord N10 to the Google Pixel 4a, and on to pricier phones.

You want more onboard storageAnother downside is the limited storage space of just 64GB, and while that’s expandable to 256GB via microSD card, that’s still a lot less than the 512GB or even 1TB found in other phones. If on-device storage is important, opt for something else.